Schizophrenia is described as a debilitating, chronic, and relapsing brain disorder with complex symptomology. 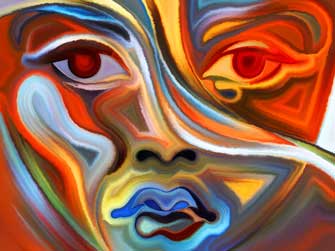 A study showed a reduction in life expectancy of 18.7 years for men and 16.3 years for women with schizophrenia.

Positive symptoms include hallucinations, vulnerability to stressors and basic negative beliefs about the self and the world. Negative symptoms include psychomotor slowing, underactivity, blunting of affect, passivity and lack of initiative, poverty of quantity or content of speech, poor nonverbal communication by facial expression, eye contact, voice modulation and posture, poor self-care, and social performance, which have a detrimental effect on psychosocial functioning and quality of life.

Despite more than a century of research, the precise cause of schizophrenia still seems to elude researchers. However, it is postulated that risk factors for include environmental factors. Risk factors for schizophrenia include eg birthing complications (eg. preeclampsia, gestational diabetes), the season of birth (winter births are associated with a 10% higher relative risk), severe maternal malnutrition (eg vitamin D deficiency), maternal influenza in pregnancy, family history (40%), childhood trauma, social isolation, cannabis use, minority ethnicity, and urbanisation (2%-4%).

The Diagnostic and Statistical Manual of Mental Disorders 5 recommends that two or more of the following symptoms must be present for a significant portion of time during a one-month period:

There must also be social/occupational dysfunction, while signs of disturbance must persist for at least six months, including at least one month of symptoms.

According to the International Classification of Diseases (ICD-10) diagnostic criteria, the patient must exhibit at least one of the following, for a period greater than or equal to a month before schizophrenia should be considered as a diagnosis:

Or at least two of the following symptoms must be observed, for a period greater than or equal to a month:

The authors of the 2020 British Association for Psychopharmacology (BAP) guidelines state that a diagnosis of a psychotic disorder can often be made early in the course of illness, but for some patients the clinical presentation evolves over time, with symptoms changing and emerging, and only later does the diagnosis become clear.

The ICD-10 subcategories schizophrenia based on the key presenting symptoms as either:

1 Paranoid schizophrenia: dominated by relatively stable, often paranoid delusions, usually accompanied by hallucinations, particularly of the auditory variety, and perceptual disturbances. Disturbances of affect, volition and speech, and catatonic symptoms, are either absent or relatively inconspicuous.

2 Hebephrenic schizophrenia: affective changes are prominent, delusions and hallucinations fleeting and fragmentary, behaviour irresponsible and unpredictable, and mannerisms common. The mood is shallow and inappropriate, thought is disorganised, and speech is incoherent. There is a tendency to social isolation. Usually the prognosis is poor because of the rapid development of negative symptoms, particularly flattening of affect and loss of volition. Hebephrenia should normally be diagnosed only in adolescents or young adults.

3 Catatonic schizophrenia: dominated by prominent psychomotor disturbances that may alternate between extremes such as hyperkinesis and stupor, or automatic obedience and negativism. Constrained attitudes and postures may be maintained for long periods. Episodes of violent excitement may be a striking feature of the condition. The catatonic phenomena may be combined with a dream-like (oneiroid) state with vivid scenic hallucinations.

4 Undifferentiated schizophrenia: psychotic conditions meeting the general diagnostic criteria for schizophrenia but not conforming to any of the subtypes (paranoid, hebephrenic or catatonic), or exhibiting the features of more than one of them without a clear predominance of a particular set of diagnostic characteristics.

6 Residual schizophrenia: a chronic stage in the development of a schizophrenic illness in which there has been a clear progression from an early stage to a later stage characterised by long-term, though not necessarily irreversible, negative symptoms.

7 Simple schizophrenia: a disorder in which there is an insidious but progressive development of oddities of conduct, inability to meet the demands of society, and decline in total performance. The characteristic negative features of residual schizophrenia develop without being preceded by any overt psychotic symptoms.

Management of schizophrenia and challenges

The goals in treating schizophrenia include targeting symptoms, preventing relapse, and increasing adaptive functioning so that the patient can be integrated back into the community.11 Standard management of schizophrenia includes the use of antipsychotic medications to help control acute psychotic episodes and prevent relapses, whereas maintenance therapy is used in the long term after patients have been stabilised. 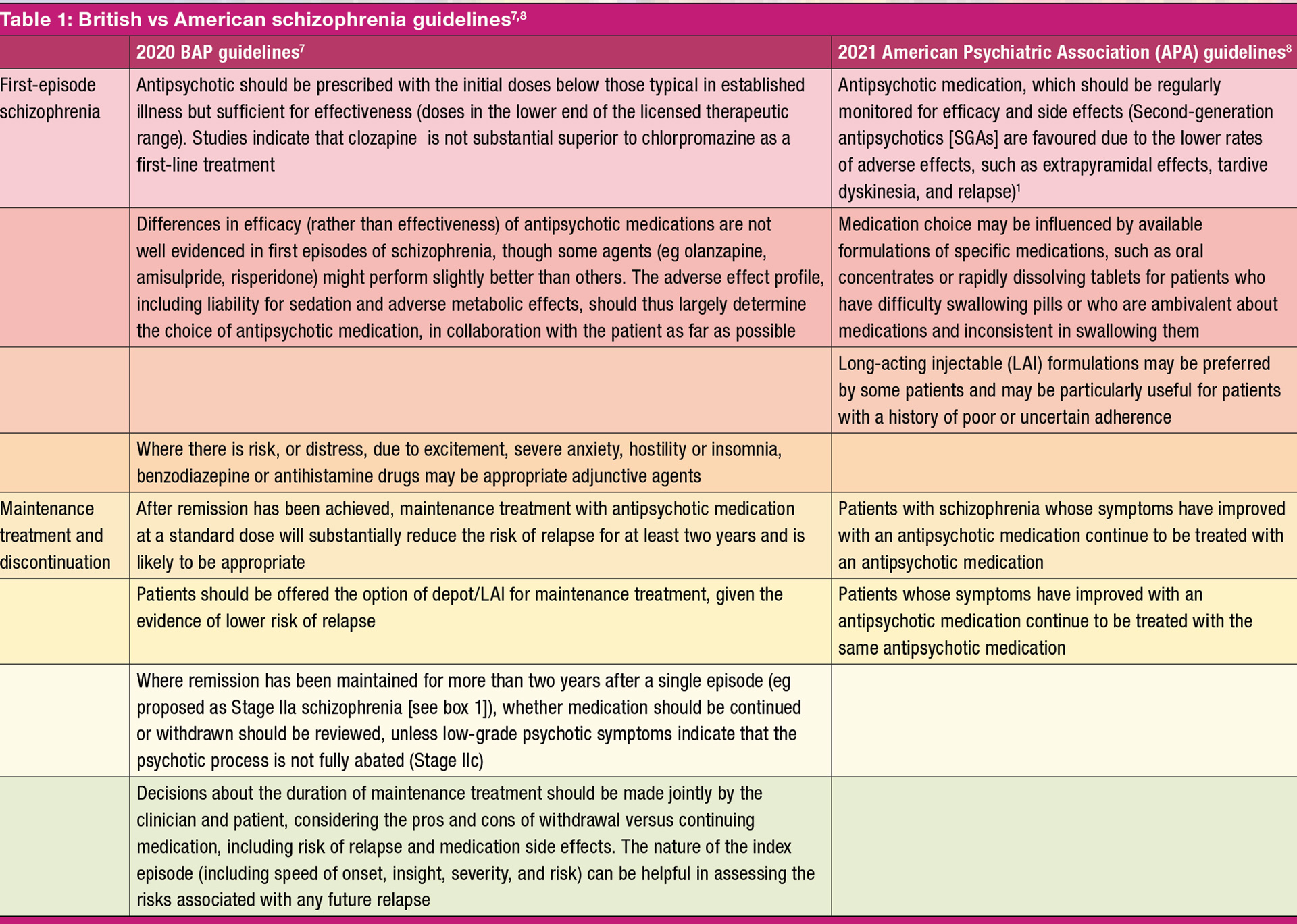 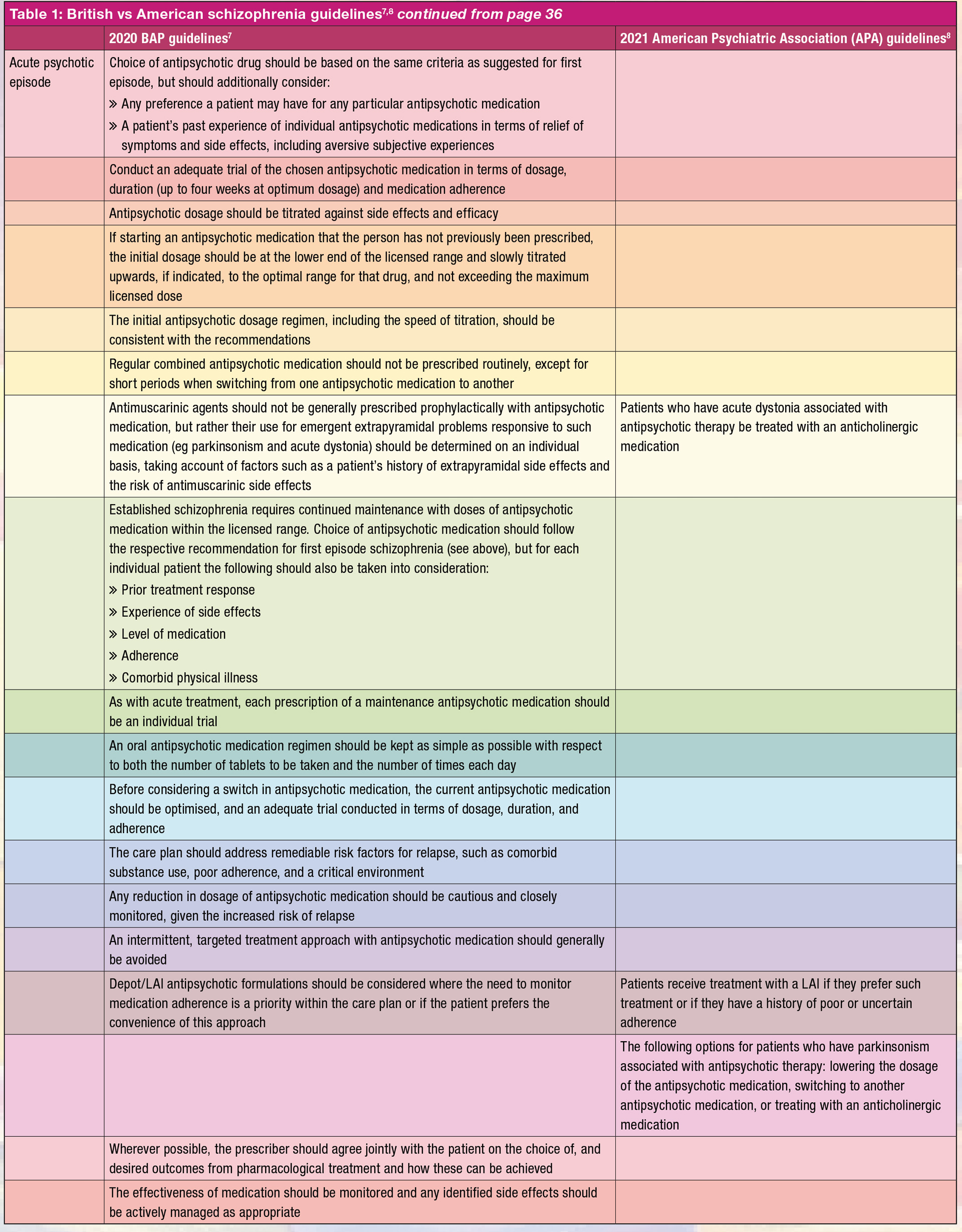 Early intervention in the first episode of psychosis has the potential to improve outcomes. Such intervention could result in attenuation, delay or even prevention of the onset of psychosis in some individuals.

Since patients rarely return to their baseline level of adaptive functioning, both nonpharmacological and pharmacological treatments must be used to optimise long-term outcomes.

Pharmacotherapy is the mainstay of schizophrenia management, but residual symptoms may persist. For that reason, nonpharmacological treatments, such psychotherapy, are also important.

Barnes et al point out that the level of adherence differs between patients living with schizophrenia. Studies found that adherence may be stable over time in the majority of patients but may be higher (>50%) in patients who experience first-episode psychosis.

A review of medication records of people with established schizophrenia, found that 61% of patients living with schizophrenia were partially adherent or non-adherent at some point during a four-year period.

Following discharge from hospital, up to 25% of patients with schizophrenia may be only partially adherent and with continuing treatment, this figure may rise to 50% a year later and 75% by two years.

Both the BAP and the APA recommend that patients living with schizophrenia who have a history of poor or uncertain adherence should be given the option of treatment with a LAI.

According to the APA, LAI formulations can provide a number of benefits for patients, families, and clinicians, yet they are often underutilised. Benefits include:

Although some patients may not wish to experience the discomfort associated with receiving injections of medications, this is not a major barrier for most patients, states the APA. In addition, discomfort can often be minimised by using SGA LAIs rather than FGA LAIs, which have sesame oil-based vehicles, or by using an LAI with a small injection volume or lower administration frequency.

Box 1: Stages of schizophrenia
Clinical staging is, simply, a more refined form of diagnosis. Its value is recognised in the treatment of malignancies and many other potentially serious medical illnesses, such as diabetes and arthritis, where limiting the extension and secondary impacts of the disease, and improving quality of life and survival, all rely on the earliest possible delivery of effective interventions.Clinical staging differs from conventional diagnostic practice in that it defines not only the extent of progression of a disorder at a particular point in time but also where a person lies currently along the continuum of the course of an illness.