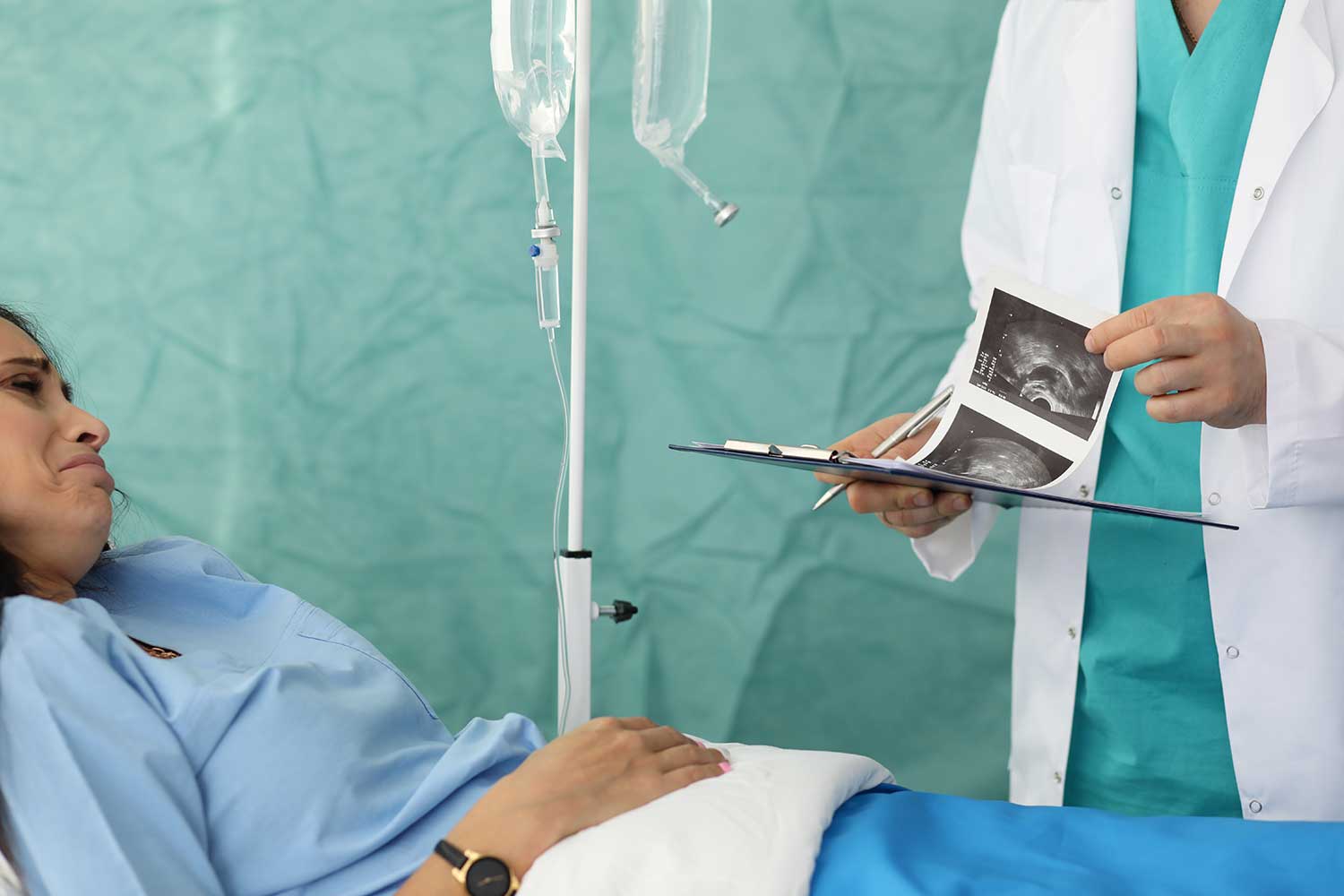 Risk factors for recurrent pregnancy loss include chromosomal abnormalities (60%), immunological and immunogenic, endocrinological, DNA fragmentation in the sperm, impairment in the biosensor function of the endometrium as well as lifestyle influences.

Moderate to severe depression was diagnosed in 8%–20% and post-traumatic stress disorder in 25%–39% of patients. Further, some studies revealed a higher risk for obsessive-compulsive disorder in women with early pregnancy loss.3

Risk factors for RPL include chromosomal abnormalities (60%), immunological and immunogenic, endocrinological, DNA fragmentation in the sperm, impairment in the biosensor function of the endometrium as well as lifestyle influences. Standard investigations will be normal for many couples and the cause of RPL is deemed ‘unexplained’ in around 50% of cases.1

Poor lifestyle choices that can result in a hostile reproductive environment for the embryo are being either overweight/obese (body mass index [BMI] >30 1.7-fold increase and a BMI >25 1.2-fold risk of RPL), or underweight (increases the risk of RPL 1.2-fold compared to those with normal BMI).1

Interestingly, other lifestyle factors such as alcohol intake, cigarette smoking and high caffeine intake (>300mg per day) have not been shown to increase the risk of RPL.1

However, the ESHRE guideline (2018) strongly recommends smoking cessation. Furthermore, the society states that based on the evidence, it is unclear whether caffeine intake is a risk factor for RPL.6

More recently, researchers have postulated that progesterone deficiency – also known as known as luteal phase deficiency (LPD) – could be a cause of some miscarriages.3,7,8

The role of progesterone

Progesterone is a female hormone that is naturally secreted by the corpus luteum (CL), a mass of cells that forms in an ovary, as well as in the placenta. CL plays an important role in the regulation of ovulation and menstruation.9

Progesterone prepares the endometrial lining of the uterus to allow implantation of the early embryo. It is therefore essential for the establishment as well as the maintenance of a pregnancy.3,7,9

Furthermore, progesterone influences the production of inflammatory mediators, such as human T-cells within the uterine cavity. A loss of progesterone therefore leads to an increase in myometrial contractility, coupled with a decrease in fighting off immunologic threats.9

It has been postulated that a dysfunction in progesterone secretion or action could contribute to RPL.  Progesterone deficiency can be primary, in which no cause is found (idiopathic), or secondary to other pathologies including thyroid or prolactin disorders.9

One proposed diagnostic criterium for LPD is a shortened luteal phase of less than nine days from the day of ovulation to menstrual bleeding. The normal luteal phase length from ovulation to menses ranges from 11 to 17 days with most luteal phases lasting 12 to 14 days.  LPD is also suspected when spotting begins many days before mensuration without a structural or infectious cause.9

Two mechanisms have been proposed as causes of clinical LPD: 9

Both mechanisms result in a CL with deficiencies in progesterone production. The second theory suggests an inability of the endometrium to mount a proper response to appropriate oestradiol and progesterone exposure.9

Studies investigating the efficacy and safety of progesterone to prevent RPL

The aim of the two trials and subgroup analysis was to generate robust evidence on the role of progesterone therapy to prevent miscarriage and increase the live birth rate.8

The PROMISE trial involved 836 women with idiopathic recurrent miscarriage randomised to receive either 400 mg of vaginal micronized progesterone twice daily or placebo from the time of positive pregnancy test to 12 weeks gestation.10

Next, the team performed a prespecified subgroup analysis by the number of previous miscarriages.  Participants were split into two subgroups:

A post-hoc subgroup analysis was also performed, which included women who had 3, 4, 5, and >6 previous miscarriages. The researchers acknowledged that the post-hoc analysis would be underpowered and could only be used for hypothesis generation.8

However, they added, the analysis would still be useful for assessing a biological gradient in these subgroups. The findings appeared to suggest a trend for greater benefit with increasing number of previous miscarriages.8

The PRISM trial assessed the reproducibility of this subgroup effect by the increasing number of previous miscarriages. Women (n=4153) were randomly assigned to receive vaginal suppositories containing either 400mg of progesterone or matching placebo twice daily, from the time at which they presented with bleeding through 16 weeks of gestation. The primary outcome was the birth of a live-born baby after at least 34 weeks of gestation.8,11

According to the researchers, the PRISM trial was designed and conducted with methodologic rigour, appropriate randomisation, allocation concealment, double-blinding with placebo control, excellent follow-up rate, and analysis according to a prespecified statistical analysis plan.8

The primary analysis of PRISM trial found that the live birth rate was 75% in the progesterone group vs 72% in the placebo group. For the prespecified subgroup analysis by the number of previous miscarriages, the study population was split into three subgroups: 8

Two post-hoc subgroup analyses were performed to explore in detail for a possible biological gradient:8

The researchers concluded that both studies showed that women who had >3 previous miscarriages benefitted most from progesterone intervention.8

Ogwulu et al conducted a cost-effectiveness analysis in the UK based on the findings of the PRIMS trial. The cost of progesterone therapy in preventing pregnancy loss in women with early pregnancy vaginal bleeding was compared to placebo.12

The analysis included women between the ages of 16–39 years with bleeding in early pregnancy and ultrasound evidence of an intrauterine sac. The researchers performed an incremental cost-effectiveness analysis and subgroup analyses were carried out on women with ≥1 or ≥3 previous miscarriages. The primary endpoint was cost per additional live birth at ≥34 weeks of gestation.12

The mean cost per woman in the progesterone group was £76  more than the mean cost in the placebo group.12

Both subgroup analyses were more favourable, especially for women who had  at least one previous miscarriage, where progesterone was more effective than placebo with an effect difference of 0.055 (an additional gain of five live births per 100 women) and this was associated with a cost saving of £322.12

The researchers concluded that given the available evidence, progesterone is likely to be a cost-effective intervention for all women at risk, but particularly for women with previous miscarriages who present with bleeding in early pregnancy.12

This study does not take into account either the distress that comes with miscarriages nor the subsequent resources associated with counselling and close monitoring in subsequent pregnancies, which would incur additional costs.

What do guidelines recommend?

According to the 2021 National Institute for Health and Care Excellence (NICE) guideline on the management of miscarriage, woman with a confirmed intrauterine pregnancy with a foetal heartbeat who presents with vaginal bleeding, but has no history of previous miscarriage, should be advised that:11

Furthermore, the guideline recommends that progesterone should be offered to women who experience bleeding in early pregnancy and have previously had a miscarriage. If a foetal heartbeat is confirmed, continue progesterone until 16 completed weeks of pregnancy.11