Patients with vitiligo often feel embarrassed and stigmatised, with no knowledge of where to turn for assistance and information. Vitiligo is a chronic condition in which areas of skin lose their normal pigment. It can start at any age, but in more than half of patients affected it does so before the age of 20. A common condition, vitiligo affects up to 2% of the population worldwide, of all ages and skin types. The extent of the condition is unpredictable, varying from small patches to total loss of skin colour. In most patients, it tends to change slowly, with periods of stability often lasting several years. 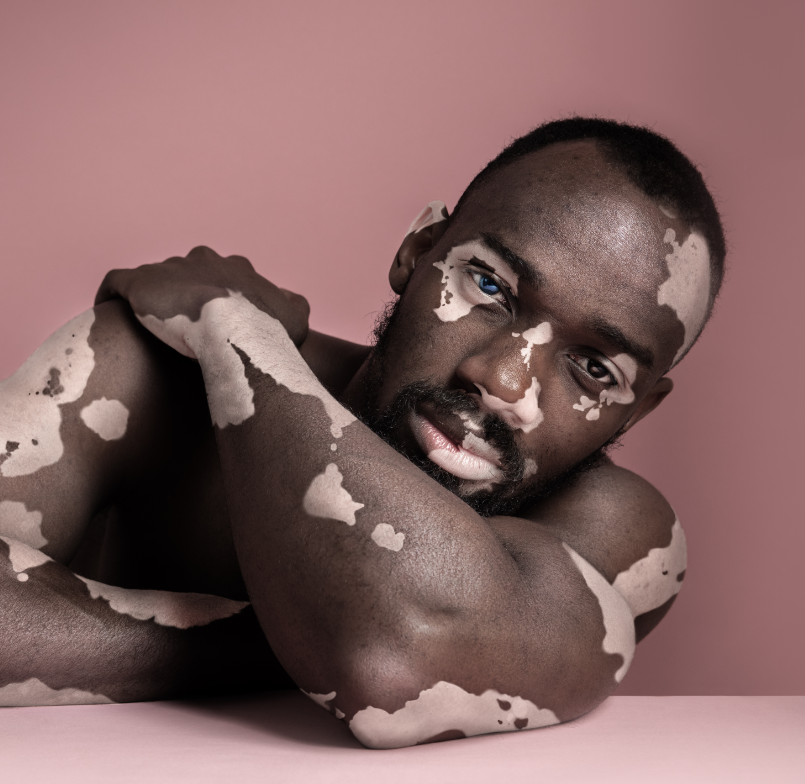 The clinical diagnosis of vitiligo is generally made through the appearance of reduced or lost pigmentation of the skin [Image: Shutterstock].

“While the cause of vitiligo is not known, it is understood to be an autoimmune condition in which the body’s own immune system rejects some of its own melanocytes,” the British Association of Dermatologists explains. “As a result, thyroid disease and other autoimmune conditions are more common in patients with vitiligo.” According to the Society for Paediatric Dermatology, vitiligo can affect all areas of the body, especially those that are “bumped” or rubbed frequently, like the elbows, hands, waist, knees, and top of the feet. It can also affect the skin around the eyes, nose, mouth, and genitals.

Vitiligo is not painful or itchy, but the appearance of white patches may make a person feel self-conscious, especially if vitiligo affects skin in visible places such as the face, arms, or legs. “Although any part of the body may be affected by vitiligo, depigmentation usually first develops on sun-exposed areas of the skin, such as a patient’s hands, feet, arms, face, and lips,” the American Vitiligo Research Foundation said.

Vitiligo generally appears in one of three patterns:

Other less common symptoms include premature whitening or greying of the hair on the scalp, eyelashes, eyebrows, or
beard, and loss or change in colour of the retina.

The clinical diagnosis of vitiligo is generally made through the appearance of reduced or lost pigmentation of the skin in a typical distribution. Symptoms associated with other skin conditions, such as psoriasis, will need to be ruled out during an examination of a patient’s skin. According to New York University Langone, “every area of skin needs to be examined to determine which type of vitiligo a patient has, based on where the patches appear.

“It’s usually easy to see the patches on dark skin. However, in lighter-skinned patients, where there’s less distinction between the affected and unaffected skin, a handheld tool called a Wood’s lamp (which shines ultraviolet light) will be used.” Skin with vitiligo will look different under this type of light and the tool can also be used to distinguish loss of pigment versus a reduction in colour, which may be the sign of an inflammatory rash.

A dermatologist may request additional tests to confirm diagnosis. A skin biopsy, for instance, will show whether melanocytes are present. A lack of melanocytes can confirm a vitiligo diagnosis. A blood test may also be requested to determine whether the vitiligo is related to an underlying autoimmune disease, such as anaemia or type 1 diabetes.

Vitiligo can be socially and psychologically devastating. As there is currently no known cure, treatment is aimed at minimising or halting disease progression, inducing repigmentation, and achieving an acceptable cosmetic result.

Exposure to these focused ultraviolet rays, called UVB rays, may increase the number of melanocytes in areas of skin affected by vitiligo and prevent new white patches from forming. For patients with mild vitiligo, New York University Langone recommends four sessions per month may help shrink the size of existing light patches of skin and may prevent new patches from developing. For those with moderate to severe vitiligo, 2-3 sessions per week are recommended.