Acne, also known as acne vulgaris, affects an estimated 9.4% of the global population, making it the eighth most prevalent condition worldwide. 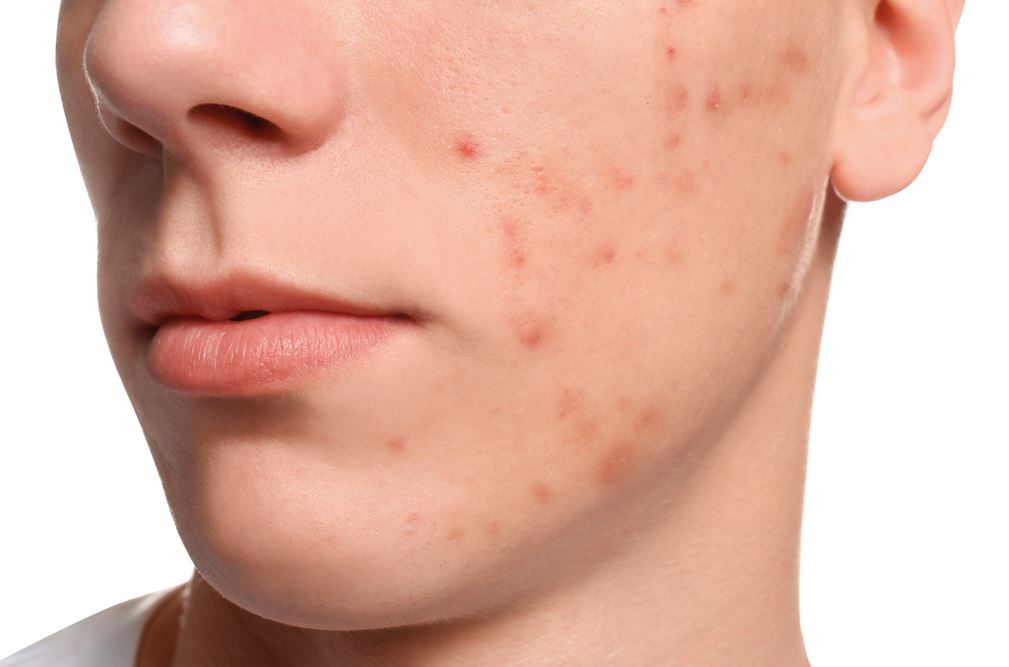 Nearly 85% of teenagers are affected by acne at some point during their teenage years.

Nearly 85% of teenagers are affected by acne at some point during their teenage years. Although the overall prevalence of acne is higher in females, epidemiological studies have demonstrated that males are more affected by adolescent acne (61%).

Acne is defined as a chronic inflammatory disease of the pilosebaceous units. It is characterised by the formation of comedones, erythematous papules, pustules, and/or nodules (e.g. pseudocysts) that can lead to scarring.

Acne develops because of hypersensitivity of the sebaceous glands to a normal circulating level of androgens, which are aggravated by Propionibacterium acnes and inflammation. Causes of acne include the following:

The age of peak incidence is the late teens, with progressive reduction in prevalence with increasing age. Male teens are affected by more severe acne than their female counterparts.

During puberty, sebum secretion is increased as 5-alpha reductase converts testosterone to more potent dihydrotestosterone, which binds to specific receptors in the sebaceous glands increasing sebum production. This leads to an increased hyperproliferation of follicular epidermis, so there is retention of sebum. Distended follicles rupture and release pro-inflammatory chemicals into the dermis, stimulating inflammation.

In a cohort of 40 patients, 54% had post-acne scarring, 58% developed hyperpigmentation and 14% had hypertrophic/keloid scars.

Acne duration correlates with scarring. Mean duration is about two years. The course of acne is influenced by hormonal and genetic factors, although exogenous elements (e.g. physical, chemical, environmental, dietary) can precipitate flares.

The Comprehensive Acne Severity Scale (CASS) can be used to estimate acne severity. Using CASS, the clinician can assess inflammatory and non-inflammatory lesions. It can also be used to evaluate patient response to treatment.

The 2019 American Academy of Dermatology (AAD) recommends the following:

The AAD recommends systemic antibiotics in moderate to severe inflammatory acne that are resistant to topical therapies. They should be used in combination with a topical retinoid and BPO. Limiting antibiotic use to minimise antibiotic resistance is suggested.

Recommended agents include oral tetracycline, doxycycline, minocycline, erythromycin, azithromycin, trimethoprim/sulfamethoxazole (TMP/SMX), trimethoprim, and cephalexin have been shown to be effective in the treatment of moderate and severe acne, and forms of inflammatory acne that are resistant to topical treatments.

Tetracyclines (tetracycline, doxycycline, minocycline) are the preferred systemic antibiotics. Oral erythromycin and azithromycin should not be prescribed for children under eight.

antibiotic use to the shortest possible duration, typically three months, to minimise the development of bacterial resistance.

Concomitant topical therapy with benzoyl peroxide and/or a retinoid should be used with systemic antibiotics, as well as for maintenance after completion of systemic antibiotic therapy. Limiting systemic antibiotic use is urged due to reported associations of inflammatory bowel disease, pharyngitis, Clostridium difficile infection, and induction of Candida vulvovaginitis.

Low-dose isotretinoin can be used to effectively treat acne and reduce the frequency and severity of medication related side-effects. Intermittent dosing of isotretinoin is not recommended.

Routine monitoring of liver function tests, serum cholesterol, and triglycerides at baseline and again until response to treatment is established is recommended. Routine monitoring of complete blood count is not recommended. The AAD recommends that prescribing physicians should also monitor their patients for any indication of inflammatory bowel disease and depressive symptoms and educate their patients about the potential risks with isotretinoin.

Mean depression scores also significantly decreased from baseline. The authors concluded that isotretinoin treatment for acne does not appear to be associated with an increased risk for depression and that, indeed, the treatment of acne appeared to ameliorate depressive symptoms quite probably due to the improvement in the acne.

Isotretinoin should be used as 0.5mg/kg to 1mg/kg body weight in daily or weekly pulse regimen. It controls sebum production, regulates pilosebaceous epidermal hyperproliferation, and reduces inflammation by controlling P. acnes. It may give rise to dryness, hairless, and cheilitis.

Fixed-combination BPO and adapalene provides significantly greater efficacy as early as the first week of treatment, relative to monotherapies, with a comparable safety profile to adapalene alone.

A rapid onset of action was observed using this combination treatment, reducing lesions from the first week. Additionally, this combination therapy clears both inflammatory and non-inflammatory lesions, targets three out of four pathogenic causes of acne, is antibiotic-free (removing the risk of antibiotic resistance) and has shown long-term efficacy and tolerability.

Chemical peeling is a skin resurfacing procedure commonly used for facial rejuvenation and aesthetics. It causes a manageable injury to the skin, thus resulting in subsequent regeneration of a new epidermal layer of the dermal tissues. The injury depth is determined by the concentration of acid used, and by the type of vehicle, buffering, and duration of skin contact. Therefore, chemical peels are classified as superficial (destroying the epidermis), moderate (destroying the papillary dermis and upper reticular dermis) or deep (destroying part, or all of the midreticular dermis). Superficial peels are generally used for acne vulgaris, whereas deep peels are used to treat acne scars.

Photodynamic therapy with topical 5-aminolevulinic acid and intense pulsed light (IPL) and other light sources have been shown to be effective in moderate-to-severe acne. In combination with fractional CO2 laser treatments, IPL has been shown to reduce inflammatory lesions and atrophic scars. Around 90% of the patients experienced significant or moderate overall improvement, and almost 80% of patients rated their results as ‘excellent’ or ‘good’. Combination blue–red light-emitting diode phototherapy at home has been shown to reduce sebum production, attenuate inflammatory cell infiltrations, and decrease sebaceous gland size.

Papules, pustules, and nodules respond well to therapy using the 1550nm Erbium–Glass laser. The sebaceous gland size decreased significantly, hence the long remission period. Treatment efficacy is due to the antibacterial effect on acne and the ablation of sebaceous glands. Although cost might be an issue, laser therapy can induce remission in acne long term.

Acne typically recurs soon after cessation of active treatment, making maintenance treatment necessary. About 28% of sections of normal-appearing skin from patients with acne show histologic features of microcomedones, the subclinical precursors to both inflammatory and noninflammatory acne lesions, and biopsy of papules demonstrates the presence of microcomedones in 52% of patients with acne.

Maintenance anti-comedogenic agents have been shown to effectively control acne and prevent relapses and minimise sequelae. Retinoids are recommended for maintenance. Antibiotics do not prevent the development of micro-comedones and should not be used for maintenance.

Although the incidence is higher in women, boys are more affected by adolescent and severe forms of acne. Acne during adolescence add to the psychological stress normally associated with this period. A number of topical, systemic, and adjunctive therapies are available.