In 2020, the IFA published a comprehensive paper on IV fluid therapy management in the perioperative and critical care setting. 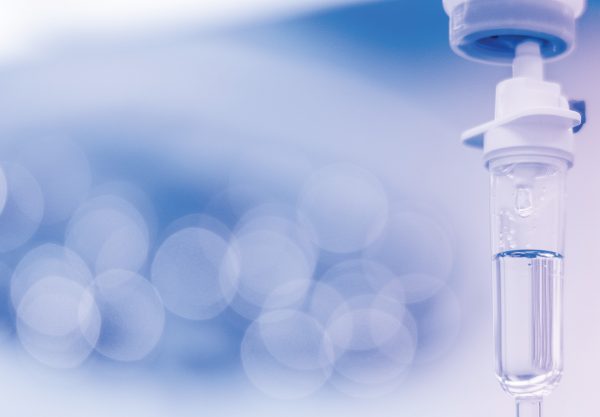 Adverse events associated with the use of IV fluid therapy include problems arising from hypothermia, electrolyte composition, infused volume or rate of infusion and anaphylactoid/toxic effects.

According to van Regenmortel et al, the most serious adverse event associated with fluid therapy is fluid overload, which is an independent risk factor for morbidity and mortality in critically ill and surgical patients. Fluid overload is described as an expansion of extracellular fluid volume with a positive fluid balance that produces a weight gain >10% from baseline.

According to Hawkins et al, fluid overload is the result of aggressive resuscitation fluids, inadequate monitoring of fluid responsiveness, ‘hidden’ fluids not recognised by the medical team, and persistent use of maintenance IV fluids.

To avoid adverse events, the IFA recommends careful evaluation of the chosen solution and a phase-wise approach to its administration, considering the clinical course of the disease or surgical procedure.

Resuscitation: to correct an intravascular volume deficit or acute hypovolaemia

Replacement: to correct existing or developing deficits that cannot be compensated by oral intake alone

Maintenance: indicated in haemodynamically stable patients that are not able/allowed to drink water in order to cover their daily requirements of water and electrolytes.

In addition to these classical indications, the quantitative relevance of fluids administered as drug diluents and to guarantee catheter patency, the so-called fluid creep, has been gaining attention over the past few years, according to the IFA.

What is fluid stewardship?

Although there is currently no official definition for what fluid stewardship is, it is loosely described as:

The IFA summarises fluid stewardship as follows: Giving the right fluid in the right dose to the right patient at the right time.

In 1832 during the cholera epidemic,Scottish medical pioneer, Dr Thomas Latta,
used a fluid consisting of ‘soda and two scruples of subcarbonate of soda in six pints of water’ and instead of infusing fluid into the colon, decided to ‘throw it immediately in the circulation’, to treat patients. Although the mixture proved to be very successful, it was soon forgotten.
However, between 1882 and 1885 the British physiologist, Dr Sydney Ringer, conducted the so-called ‘extravital investigations’ and developed a fluid which enabled a frog’s heart to continue beating outside the body by using a solution comparable to blood plasma.
In 1932 the American paediatrician Dr Alexis Hartmann modified Ringer’s solution by adding the buffer lactate.Physiological or normal saline (eg 0.9% sodium chloride) was developed by Dutch physiologist Dr Hartog Jacob Hamburger
developed in the 1900s. Latta, Ringer and Hartmann’s inventions are classified
as crystalloids.The first widespread use of human albumin solution for fluid resuscitation
occurred following the 1941 attack on Pearl Harbour. Albumin is classified as a colloid.Crystalloid fluids are the first choice for fluid resuscitation in the presence of hypovolemia, haemorrhage, sepsis and dehydration. Other clinical applications include acting as a solution for intravenous medication delivery, delivering maintenance fluid in patients with limited or no enteral nutrition, blood pressure management, and increasing diuresis to avoid nephrotoxic drug
or toxin-mediated end-organ damage.

Fluid replacement with synthetic colloids, such as hydroxyethyl starch, dextran and gelatine, is cautioned against, particularly in severe sepsis and septic shock.

The four Ds of fluid therapy

When treating patients, the four Ds of fluid therapy should be considered, write Malbrain et al. The four Ds are:

2 Dosing: calculate how much to give

3 Duration: of the IV fluid therapy

4 De-escalation: stop it as soon as possible.

Resuscitation: the goal of treating a patient with haemodynamic shock is resuscitation and correction of shock using adequate perfusion pressure. These patients require rapid fluid bolus (although the exact amount can vary, usually 3ml/kg-4ml/kg given over 10 to 15 minutes and repeated when necessary), is usually associated with vasopressor administration.

Simultaneously, emergency procedures to resolve any obvious underlying cause should be performed, with haemodynamic monitoring initiated. During this phase, the goal is early adequate goal-directed fluid management (fluid balance must be positive). The IFA states that it does not support ‘blind’ adherence to the surviving sepsis campaign guidelines to administer 30ml/kg of fluids within the first hour for all patients, because this may result to either over- or under resuscitation in some patients. Every patient needs an individual and personalised approach.

Optimisation phase: this phase starts when the patient is no longer in overt absolute/relative hypovolaemia but remains haemodynamically unstable. It is extremely important that patients are monitored during this phase. Decisions about the administration of fluids should be some form of monitoring will by now be in place. Fluids should be administered according to individual needs and reassessed on a regular basis. Fluid challenge techniques can be used for reassessment and should take the following components into consideration:

The goal during this phase is the optimisation and maintenance of adequate tissue perfusion and oxygenation to prevent and limit organ damage. Monitoring is also extremely important during this phase and include for example arterial catheter, echocardiography, central venous pressure, arteriovenous blood gas to obtain the most complete picture of a patient’s haemodynamic status.

Stabilisation phase: once the patient is stable, the stabilisation phase begins and evolves over days. In this phase, the aim of fluid management is to ensure water and electrolytes to replace ongoing losses and provide organ support. The target should be a zero or slightly negative fluid balance. It might be of interest, in this context, to underline the fact that in major trials suggesting a harmful effect of starches, these colloids were given abundantly also in the stabilisation phase, eg in a phase that possibly did not require these drugs.

Evacuation phase or de-escalation phase: during the final phase, the goal is to remove excessive fluid. This either happens as a result of spontaneous diuresis as the patient recovers, or if required through the use of ultrafiltration or diuretics. According to the IFA, diuretics might favour the recruitment of microcirculation, thus decreasing diffusion distances and improving oxygen extraction. 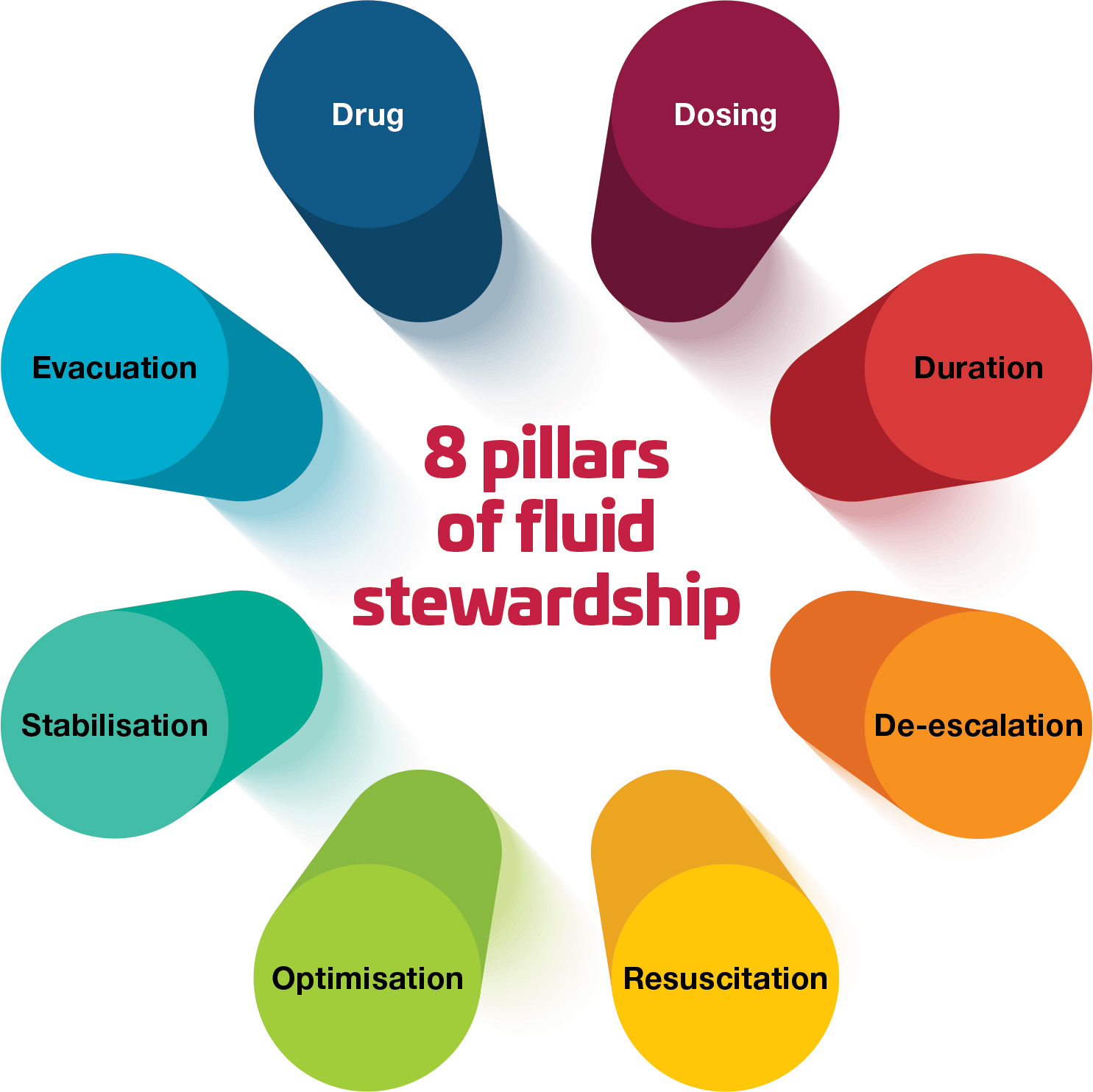 Getting the balance right

According to Castera and Borhade fluid management is challenging because each patient’s individual fluid needs, require careful consideration.

However, add the authors, it is impossible to apply a single, perfect formula universally to all patients. One general principle that can guide decision making is to replace whatever fluid is being lost as accurately as possible.

For example, a patient admitted to the hospital with severe burns will have much greater fluid losses than a relatively healthy patient who is allowed nothing by mouth and awaiting a procedure.

As mentioned above, fluid overload is associated with an increased risk of morbidity and mortality. The following may help to determine whether a patient is fluid depleted or overloaded.

Weight: one of the most sensitive indicators of patient volume status changes is their body weight. Patient weight changes approximate a gold standard to determine fluid status. Unfortunately, due to differences in scales available to hospital staff, this can be a challenging target to measure. It is ideal to weigh a patient daily on the same scale to determine trends in weight changes. One can see weight gain in states of fluid excess and weight loss in states of fluid deficit. It is also helpful to look at patient records to see any recent outpatient visits before hospitalisation, which might indicate a patient’s normal baseline weight.

Heart rate: tachycardia can represent a compensatory physiologic response to maintain perfusion in the setting of hypovolemia. This can be an early finding in compensated hypovolemic shock. However, there are many other reasons for tachycardia, such as pain, fever, and anxiety.

Blood pressure: falling blood pressure is an ominous finding in the setting of tachycardia, indicating that the cardiovascular system can no longer compensate adequately for hypovolemia. Conversely, elevated blood pressures can be seen in hypervolemia.

Orthostatic vital signs: a drop of at least 20mmHg systolic blood pressure or 10mmHg diastolic blood pressure within two to five minutes of quiet standing after five minutes of supine rest indicates orthostatic hypotension. Dehydrated or elderly patients who have lost sensitivity in their baroreceptors in their blood vessels might display these findings.

Respiratory rate: increased respiratory rate indicates a compensatory response to metabolic acidosis from lactic acidosis due to poor tissue perfusion. This is an early finding in hypovolemic shock.

Fontanelle: sunken fontanelle on the skull of an infant suggests hypovolemia.

Oedema: peripheral oedema can be a sign of fluid overload or third spacing of intravascular fluid.

Tear production: relevant in infants and children. It is important to ask parents for their observations and evaluate the child while in the exam room.

Skin turgor and eyeball appearance: severe cases of dehydration might present with flaccid or tented skin. Eyeballs might also appear sunken back into orbital cavities.

Tactile temperature of skin: classically find cool and clammy skin found in hypovolemic shock due to peripheral vasoconstriction causing hypoperfusion of skin, especially at the extremities (eg hands or feet).

Mucous membranes: appreciate dry, sandpaper-like texture of the oral mucosa or tongue in states of dehydration.

Jugular vein appearance: appreciate a distended jugular vein in volume overload state. Can also be found in patients with congestive heart failure who are euvolemic but not pumping blood appropriately.

Transaminases: can see an elevation in aspartate transaminase or alanine aminotransferase due to hypoperfusion of hepatic tissue and subsequent tissue hypoxia causing hepatocyte injury, also known as ‘shock liver’.

Haemoconcentration: can see elevated haematocrit due to a relative abundance of red blood cells relative to intravascular fluid volume.