This article is based on Prof Paulus Kirchhof’s presentation at the recent virtual Cardiac Arrhythmia Society of Southern Africa symposium. He is the Director of the Department of Cardiology, University Medical Center Hamburg-Eppendorf (Germany) and Professor of Cardiovascular Medicine, Institute of Cardiovascular Sciences, University of Birmingham (United Kingdom). 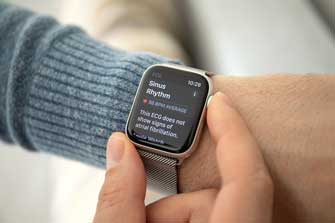 Atrial fibrillation is the most common sustained cardiac arrhythmia seen in clinical practice and is associated with an increased risk of stroke and cardiovascular disease.

This year marks the 25th anniversary of the discovery that thinning blood using vitamin K antagonists (VKAs) prevents strokes in patients with atrial fibrillation (AFib), the most common sustained cardiac arrhythmia seen in clinical practice. AFib is associated with an increased risk of stroke and cardiovascular disease (CVD).1,2,4,6

According to Prof Kirchhof, anti-coagulation is the cornerstone of AFib management. However, additional measures are required to prevent CV complications.1

Warfarin is one of the most widely used anti-coagulants worldwide and reduces the risk of stroke by 62% compared to 22% with aspirin. However, VKAs are associated with an increased risk of haemorrhagic stroke and have a narrow therapeutic index, which require frequent monitoring and dose adjustments. As a result non-adherence to treatment is high.2,3

In the Randomized Evaluation of Long-Term Anticoagulant Therapy trial (n=18 133), Marijon et al found that most deaths in patients with AFib treated with anti-coagulants (warfarin or dabigatran) is not caused by stroke, but rather as a result of CVDs.6

Their analysis showed that cardiac deaths (sudden cardiac death and progressive HF) accounted for 37.4% of all deaths, whereas stroke- and haemorrhage-related deaths represented 9.8% of the total mortality. The two strongest independent predictors of cardiac death in this population were HF and prior myocardial infarction.6

Marijon et al concluded that these results emphasise the need for interventions beyond effective anticoagulation to further reduce mortality in patients with AFib.6

Roy et al point out that the potential benefit of rhythm control with respect to mortality may have been neutralised by the harmful effects of then available anti-arrhythmic therapies (2008).7

According to Prof Kirchhof, the ATHENA (A Placebo-Controlled, Double-Blind, Parallel Arm Trial to Assess the Efficacy of Dronedarone 400 mg bid for the Prevention of Cardiovascular Hospitalization or Death from Any Cause in Patients with Atrial Fibrillation/Atrial Flutter) study was the first to show that being in sinus rhythm translates into clinical benefit. This and older studies by Wijffels et al, showing that ‘AFib begets AFib’ and can lead to damage of the atria, generated the hypothesis for the Early Treatment of AFib for Stroke Prevention Trial (EAST AFNET-4) trial.1,5,9,10,17

EAST AFNET-4 (2020) was an international, investigator-initiated, parallel-group, open, blinded-outcome assessment trial and was stopped for efficacy at the third interim analysis after a median follow-up of 5.1 years per patient.1,5,10

Participants with early AFib (diagnosed ≤1 year before enrolment) were randomised in a 1:1 ratio to either early rhythm control therapy (group 1), with anti-arrhythmic drugs (n=1395) or (group 2) to usual care (n=1394), consisting primarily of rate control drugs at the start with a move to rhythm control in 15% of patients at the two-year mark.5,10

The primary endpoint was a composite of death from CV causes, stroke, or hospitalisation with worsening of HF or acute coronary syndrome. Secondary endpoints were the number of nights spent in the hospital per year, symptoms and left ventricular function. The primary safety outcome was a composite of death, stroke, or serious adverse events related to rhythm-control therapy.5

Treatment of CV conditions, anticoagulation, and rate control were required in all patients (as per guideline recommendations). Participating teams could independently select the type of rhythm control therapy – if it was based on current guidelines. In the early rhythm control arm, the initial choice of strategy in almost all patients (95%) included flecainide (36%), amiodarone (20%) or AFib ablation (8%).5,10

A first-primary-outcome event occurred in 249 patients assigned to receive early rhythm control (3.9 per 100 person-years) and in 316 patients assigned to receive usual care (5 per 100 person-years). The mean number of nights spent in the hospital did not differ significantly between the groups (5.8±21.9 and 5.1±15.5 days per year, respectively).5,10

Most patients (>70%) in both groups were free from AFib symptoms at two years, which indicates that both rate control and rhythm control can control symptoms and maintain cardiac function in patients with early AFib.5,10

The authors concluded that early rhythm-control therapy was associated with a lower risk of adverse CV outcomes than usual care among patients with early AFib and CV conditions.5,10

In a sub-analysis of the EAST-AFNET 4 trial, Metzner et al assessed whether differences in anti-coagulation, therapy of concomitant diseases, or intensity of care can explain the clinical benefit achieved with early rhythm control.11

Oral anticoagulation was used in >90% of patients during follow-up without differences between randomised groups. There were no differences in treatment of concomitant conditions between groups. The type of rhythm control varied by country and centre.11

One of the questions frequently asked is whether the results of the EAST AFNET-4 trial would have been different if all patients underwent AFib ablation. The honest answer is that we don’t know, said Prof Kirchhof. However, what is clear, is how remarkably successful anti-arrhythmic drug therapy was. Some 80% of patients were in sinus rhythm within two years in the early rhythm control arm.1

He does, however, think that AFib ablation was a key component of the rhythm control strategy because of the synergistic effect between ablation and anti-arrhythmic drugs.  Two important clinical studies by Darkner et al and  Duytschaever et al demonstrated this synergistic effect, noted Prof Kirchhof.1,12,13

Patients with AFib and heart failure

One of the most challenging group of patients to maintain in sinus rhythm and to treat with rhythm control therapy are those with HF, said Prof Kirchhof.1

The results of the study by Rillig et al confirms that we should be treating patients with recently diagnosed AFib and HF with rhythm control to prevent their risk of CVD complications, said Prof Kirchhof.1,14

What about asymptomatic patients?

The most recent European Society of Cardiology for the diagnosis and management of AFib recommends rhythm control for symptom and quality of life improvement in symptomatic patients with AFib.15

Most of us have been taught to use rhythm control to treat symptoms. However, if you take the results of the trial into consideration, you should not withhold rhythm control from asymptomatic patients.1

To test whether there is an improvement in asymptomatic patients another sub-analysis of the EAST AFNET-4 trial was conducted. Willems et al compared the effect of early rhythm control therapy in asymptomatic patients (EHRA score I) to symptomatic patients. Primary outcome was a composite of death from CV causes, stroke, or hospitalisation with worsening of HF or ACS, analysed in a time-to-event analysis. At baseline, 30.4% patients were asymptomatic (mean age 71.3 years, 37.5% women, mean CHA2DS2-VASc score 3.4, 21.1% HF).1,16

Willems et al concluded that the clinical benefit of early, systematic rhythm control was not different between asymptomatic and symptomatic patients in EAST-AFNET 4. These results call for a shared decision discussing the benefits of rhythm control therapy in all patients with recently diagnosed AF and concomitant cardiovascular conditions.16

The safety of early rhythm control therapy was key for this outcome. Consider both anticoagulation and rhythm control in patients with recently diagnosed AFib to achieve optimal clinical outcomes.