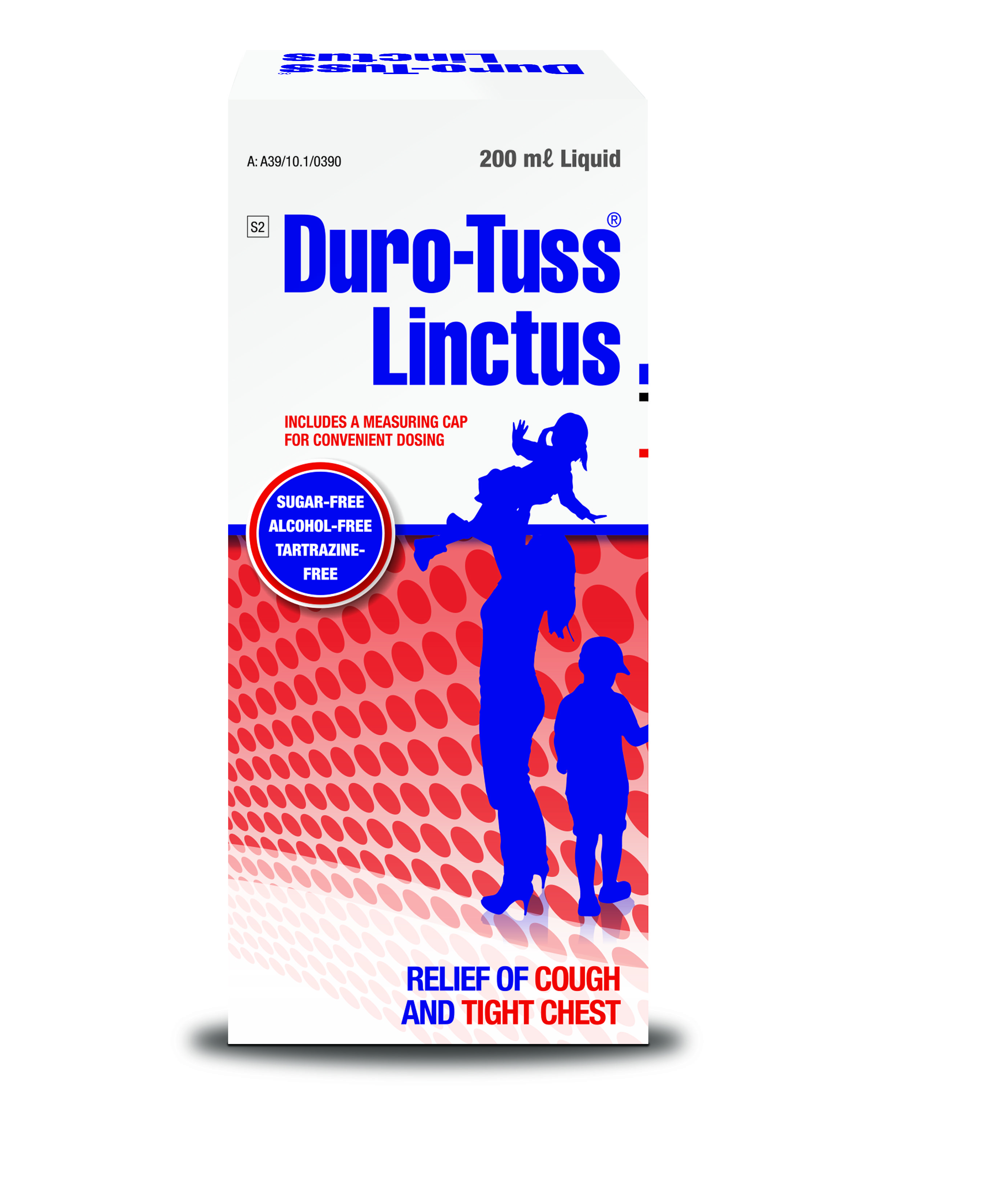 Duro-Tuss is recommended for the relief of cough and tight chest.

Duro-Tuss is relaunching in new packaging but the same trusted combination, an ideal combination to help relieve a wet, chesty cough and expel the phlegm from the chest. It is available in a 200 ml bottle, is sugar-free, alcohol-free and tartrazine-free and provides effective relief of a wet cough and tight chest.

Coughing is an important reflex that removes mucous and other secretions out of the body to help clear the airways, enabling easier breathing and faster healing.

A wet cough, also known as a productive cough, is any cough that produces mucus (phlegm). Productive coughs most often result from infections caused by bacteria or viruses, like those that cause a cold or flu, as well as bronchitis, pneumonia or smoking.

When a patient has a wet cough, it may feel like they have something stuck in their chest or the back of their throat, especially if they have a build-up of mucus. Depending on the cause of the productive cough, other symptoms may include:

Coughing may be worse at night because mucus collects at the back of the throat when lying down, further triggering a person’s cough reflex. Coughing helps to clear the mucus and congestion from the lungs and a wet cough should not be suppressed. It is recommended that patients drink lots of water when they suffer from a wet, productive cough.

Two potential treatment options for a wet (productive) cough are:

1. Mucolytics, which thin the mucus, making it less thick and sticky and easier to cough up. They are used to treat respiratory conditions characterised by excessive or thickened mucus, such as a chesty (productive) cough.

2. Bronchodilators. which make breathing easier by relaxing the muscles in the lungs and widening the airways. They also help to reduce the amount of mucus secreted.

Duro-Tuss contains a mucolytic; bromhexine and a bronchodilator; Salbutamol, which makes it easier to breathe and cough up the mucus at the same time. Duro-Tuss is South Africa’s only Salbutamol/Bromhexine combination.

Salbutamol is a B2-selective adrenergic bronchodilator which acts by stimulating B2 adrenergic receptors in the lungs to relax bronchial smooth muscle. It has shown to provide relief in 30 minutes, enhancing mucocillary clearance and reducing bronchial oedema.

Bromhexine hydrochloride acts on the mucus secreting cells to reduce the viscosity of mucus making it easier to expectorate.

Making an informed, therapeutically sound choice to suit the needs of the patient is imperative. For more information about iNova’s cough solutions go to www.inovapharma.co.za or direct your patients to www.knowyourcough.co.za.

1.What Illnesses or Conditions Cause Wet Cough, and How Do I Treat It in Myself or My Child? [online] July 2018 [cited January 2018]; Available from URL: https://www.healthline.com/health/wet-cough

4.How to treat a Cold and Cough. [online] August 2016 [cited January 2019]; Available from URL: http://www.healthpages.org/self-care/treat-cold-cough/#Cough