As many of the common winter illnesses affecting children can be treated at a pharmacy, it is useful for pharmacy personnel to have basic knowledge of them. Respiratory syncytial virus, the common cold, norovirus, strep throat and the flu can have overlapping symptoms, but it is necessary to delve into the clinical features of these conditions in order to identify them properly. 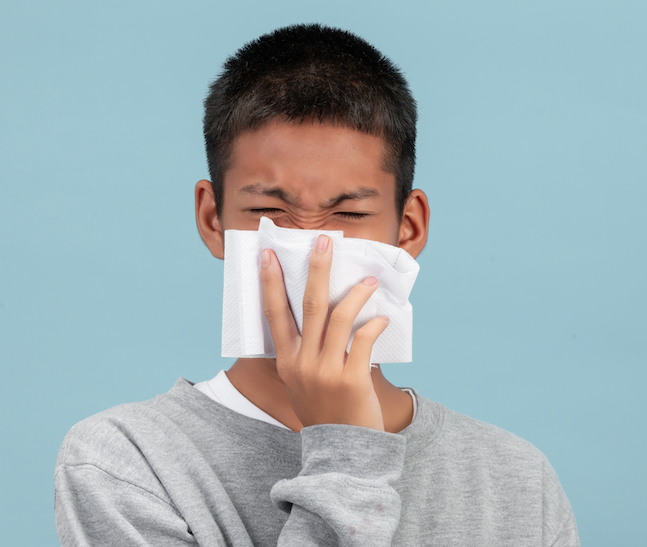 Most children recover from the flu within a week, but they may still feel very tired for as long as 3-4 weeks [Image: Freepik/jcomp].

Respiratory syncytial virus (RSV) is a common viral infection that affects the linings of the airways which includes the nose, throat, windpipe, bronchi, and bronchioles. The most common cause of respiratory infections in infants and children under 2 years of age, almost all children have had a RSV infection by the time they are 2-3 years old.

Highly contagious, RSV spreads through direct contact with the nose and mouth secretions. The virus can live on surfaces, toys, hands, etc. and infected children spread the virus before symptoms appear. Droplets from a cough or sneeze may also spread the infection. RSV infections occur throughout the year, but there are typically widespread outbreaks during the winter months.

Symptoms of RSV are like the common cold. Most children will have mild cold symptoms like a clear runny nose, fever, and cough. Some children may get an ear infection and a mild fever. More serious symptoms include wheezing and difficulty breathing. There is no effective treatment or vaccine for RSV infection. Cold like symptoms in infant patients should be treated with a gentle suctioning of the nose.

Hot-air vaporisers should be avoided because they carry the risk of scald burns, and cool- mist vaporisers may get contaminated with moulds. Its important children get plenty of rest and drink enough liquids to avoid dehydration.

A viral infection, the common cold is the leading cause for children to visit the doctor and stay home from school. Although rhinoviruses are primarily responsible, there are over 200 cold causing viruses. Young children are more susceptible to contracting a cold, with some experiencing as many as 8-10 each year. Colds tend to be more common during autumn and winter when children are indoors and closer to each other. Cold viruses are found in the nose and throat.

Because children touch their noses, eyes, and mouths so often and then touch each other while playing, cold germs spread easily. Parents, siblings, and caregivers can get viruses on their hands and then spread them between children by touch. Cold viruses may also be spread through the air when a child with a cold coughs or sneezes. A child suffering from a cold will have a runny nose with clear mucus, and then later thicker, coloured mucus.

There is no cure for the common cold and because it is caused by a virus, antibiotics will have no effect in treating it. The most parents can do is ensure their child is comfortable, gets plenty of rest, and drinks a lot of fluids.

Norovirus is probably the most common virus that few people have ever heard of. Also known as the winter vomiting bug, norovirus is part of a group of common viruses that cause gastroenteritis. Highly contagious, noroviruses can spread quickly in places where children are in close contact like schools and day care centres. A patient can catch a norovirus by touching a surface or object that has been contaminated and then putting their hand in their mouth.

Consuming contaminated foods or beverages, and sharing cups and utensils are how the virus is spread. Symptoms of norovirus are much like other causes of gastroenteritis, including vomiting and watery diarrhoea that cause dehydration. Other symptoms include nausea, stomach cramps, low-grade fever, body aches, and fatigue.

Patients usually get sick 12-48 hours after being exposed to the virus. Treatment of norovirus primarily involves giving the body time to fight the virus on its own, drinking enough liquids, and getting plenty of rest.

Also known as streptococcal pharyngitis, strep throat is usually spread through direct person-to-person transmission. Typically, transmission occurs through saliva or nasal secretions from an infected patient. Patients with a strep throat are more likely to transmit the bacteria.

Although rare, spread of GAS infections may also occur via food. A child with strep throat may have these symptoms:

It may appear 12-48 hours after the first symptoms. This is known as scarlet fever. Strep throat is usually treated with antibiotics, along with lots of rest and plenty fluids, the patients should be back to regular activities within a few days.

Influenza (flu) is a highly contagious viral infection that affects the air passages of the lungs. It is one of the most severe and common viral winter illnesses. Because the flu is caused by different flu viruses each season, patients are exposed to new types of viruses every year.

The flu is a respiratory disease but the whole body seems to suffer when the patient is a child. According to the University of Rochester Medical Centre, symptoms include:

Because antibiotics aren’t effective against viral infections, treatment should be focused on easing the patient’s symptoms until the illness passes. Along with getting lots of bed rest and drinking plenty fluids, you may recommend the patient receives a flu shot. Most children recover from the flu within a week. But they may still feel very tired for as long as 3-4 weeks.