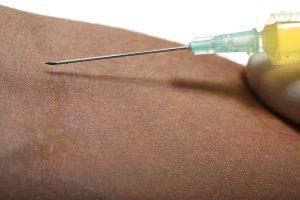 30 March 2017—Outdated vaccine supply and distribution systems are delaying and limiting the impact that vaccines have on safeguarding people’s health, according to the editors of a collection of new articles published today in Vaccine journal. Among the challenges of ensuring a consistent supply of potent vaccines identified by researchers: one in every three countries in the world experiences at least one stockout of at least one vaccine for at least one month; and 19 to 38 percent of vaccines worldwide are accidentally exposed to freezing temperatures, potentially compromising the potency of those vaccines.
Some countries are implementing changes and adopting new technologies like solar “direct drive” refrigerators and redesigning delivery systems. These changes are helping increase vaccine availability and coverage, even in more remote areas, according to the editors.

The 29 articles are part of a special supplement to Vaccine coordinated by the global health nonprofit, PATH—with guest editors from the Bill & Melinda Gates Foundation, UNICEF, and the Johns Hopkins Bloomberg School of Public Health—that identify challenges and point to solutions that countries can employ to modernize their immunisation supply chains.

“There are too many places in the world where vaccines are still not reaching the people who need them most,” says Steve Davis, president and CEO of PATH. “We need to apply the same ambitious investments to vaccine delivery as we apply to vaccine development.”

“We must act to close the global immunisation gap,” says Dr. Matshidiso Moeti, WHO regional director for Africa. “Achieving the Global Vaccine Action Plan goal of universal access to immunisation by 2020 would benefit the health of millions of Africans.”

However in South Africa – In his presentation at a conference in Hermanus Van den Heever of The Department of Health said that, according to official data, 96% of South African children had received the vaccinations they were supposed to at their age. By contrast the World Health Organisation (WHO) and UN children’s agency UNICEF estimated coverage of just 64 percent, he said.

UNICEF South Africa Immunisation+ programme has come out to say it supports and aims to add value to the Government’s own national programme already in place.

One challenge lies in the quality of health information, which is particularly problematic at the level of provincial health facilities where data is not always adequately analysed for purposes of monitoring and the development of reliable child data sets.

Immunisation supply chains—the network of staff, equipment, vehicles, and data needed to get vaccines safely from the manufacturer to the people who need them—were first developed in the late 1970s with the establishment of the Expanded Program on Immunisation.

Since 2010, however, immunisation services have expanded with additional vaccines. Immunisation programs are storing and transporting four times the volume of vaccines, according to WHO, and health care workers are administering up to six times as many doses per person, including to older children, adolescents, and adults.

“Too many children still lack access to lifesaving vaccines because of outdated and inefficient supply chains.” says Dr. Seth Berkley, CEO of Gavi, the Vaccine Alliance. “Unless we drive change and deliver comprehensive improvements now, countries won’t have the systems in place to protect the next generation of children, particularly the most vulnerable.”

One study in the Vaccine collection found that every year one in three countries worldwide experiences a stockout of at least one vaccine for a minimum of one month. The problem is most pronounced in sub-Saharan Africa, where 38 percent of countries are impacted by these stockouts. The vaccines most affected are those containing diphtheria-tetanus-pertussis (DTP) as well as bacille Calmette-Guerin (BCG) for tuberculosis, which account for 43 percent and 31 percent, respectively, of stockout events reported.

Researchers from WHO and UNICEF found that when a national-level stockout occurs, there is an 89 percent probability that immunisation delivery services will be compromised.

The study’s authors used data from the WHO-UNICEF Joint Reporting Form and UNICEF’s Vaccine Forecasting Tool to perform an in-depth analysis in 194 WHO Member States. In a search for root causes, they found that in 80 percent of cases, vaccine stockouts were attributable to government funding delays, delays in the procurement processes, and poor forecasting and stock management.

“For too many countries, it is nearly impossible to collect and harness data to forecast vaccine requirements and deliver vaccines when and where they’re needed,” said Dr. Jean Marie Okwo-Bele, director of WHO Department of Immunisation, Vaccines, and Biologicals, in commenting on the study. “But there are innovations such as electronic data systems that are being piloted and scaled up in developing countries that could and should be more widely adopted.”

Many vaccines can lose potency if exposed too long to temperatures outside the recommended range of 2 to 8 degrees Celsius. The vaccine “cold chain” strives to maintain proper temperatures for vaccines from manufacturing facilities to storage facilities, health centers, and immunisation clinics.

While waste is a concern, authors of the study say the bigger concern is the number of freezing incidents that go undetected, leaving immunized communities vulnerable to disease outbreaks. The authors cite examples of this in Micronesia (measles outbreak in 2014 in a country with a history of cold chain breaches during transportation), Mongolia (increase in hepatitis B during winter months), and the United States (increase in pertussis rates in health regions with higher percentages of refrigerators with frozen temperatures).

“Expanding the use of freeze alarms and rigorous temperature monitoring is critical to ensuring that all children have access to potent, lifesaving vaccines,” said Dr. Robin Nandy, principal advisor and chief of immunisation at UNICEF. “In the long-term, we must work toward the development of products that can better withstand temperature variations.”

New electronic data systems piloted and scaled in developing countries—such as an innovative phone-based tracking system in Uttar Pradesh, India—have led to a reduction in stockouts.

Vaccines certified as heat-tolerant have made it possible for health care workers in several countries to transport vaccines to more remote areas without requiring ice.

“Immunisation is one of our biggest public health success stories, but safe, effective vaccines don’t deliver themselves,” said Dr. Orin Levine, director of vaccine delivery at the Bill & Melinda Gates Foundation. “With consistent, visible support from national and local leaders, every community can have 21st century systems that reliably deliver lifesaving vaccines to everyone who needs them.”