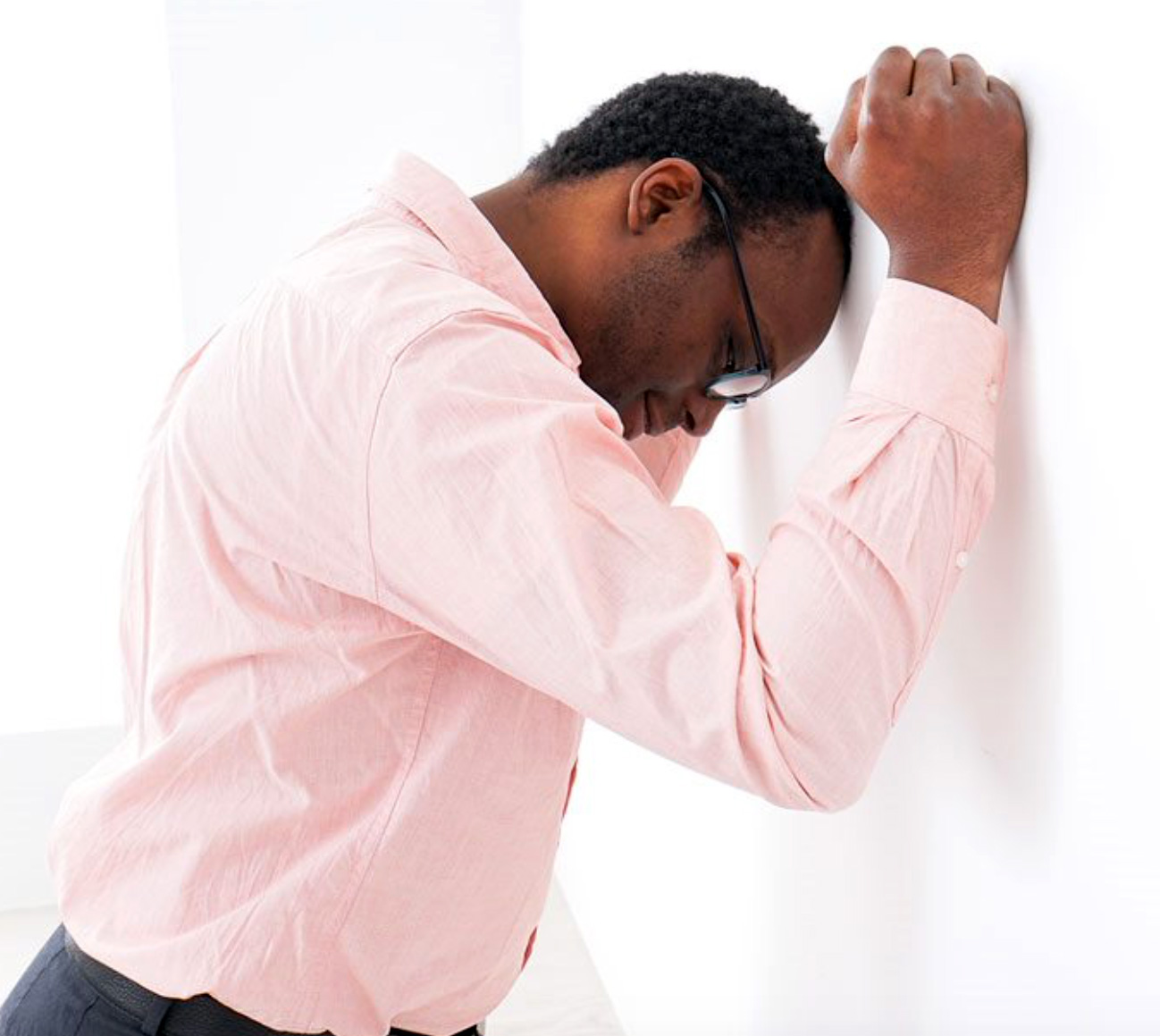 In Sub-Saharan Africa, 3645 and 2988 individuals per 100 000 population were affected. This means the incidence of anxiety and depression in the region increases by 21% and 23% respectively, compared to baseline (pre-Covid).

Although these figures and numerous other studies show that the prevalence rates of psychiatric disorders are lower in men than in women, Gough et al argue that it does not mean that men experience depression or anxiety less overall.

Rather, their expressions of symptoms are constrained by so-called hegemonic masculinity. Hegemonic masculinity indicates how a gender role is enacted with depression expression, in which social expectation for males are proactive, aggression, and violent, while female stereotype was affective, passive, and selfless. As a result, men tend to be self-reliant and tend to lace up most of their feelings – known as restrictive emotionality.

Gough et al also found that men do not put much stock in emotional talk and are wary of self-disclosure and often only volunteer information indirectly to those in their inner circle.

Sex differences in anxiety and depression

According to Altemus et al, men and women experience and express anxiety and depression in different ways – not only because of societal expectations, but also because of biological underpinnings.

There is no evidence of differences in PTSD symptoms between men and women, however, the prevalence is higher in women (10% vs 5%) – even though some argue that men’s exposure to trauma may be greater (eg in the military).

Furthermore, experimental studies have shown an increased vulnerability to intrusive negative memories, when traumatic material is presented in the early luteal phase of the menstrual cycle compared to the follicular or late luteal phase.

The prevalence of OCD in adult men and women are similar. However, in childhood, higher incidence is reported in boys (70%). Boys with OCD and adult men with childhood onset OCD are more likely to have comorbid tics, and attention deficit disorders.

The prevalence of panic attacks, often accompanied by agoraphobia, is two to three times higher in women than in men, with the difference in prevalence emerging during adolescence.

Women describe their panic attacks as shortness of breath, faintness, and feeling smothered, and tend to fear the physical symptoms of panic, whereas men more often fear the social consequences of anxiety.

A possible explanation for this finding is that women are more likely to receive positive reinforcement when expressing concerns about their symptoms that could encourages self-focused attention and more perceived physical discomfort.

The prevalence of GAD is higher in women (6.6%) than in men (3.6%). The average age of onset in women and men is 32-years, however, there are sex differences in the course and clinical presentation.

Women more frequently complain of somatic discomfort including fatigue, muscle tension, and autonomic, cardio-respiratory, and gastrointestinal symptoms than men. Men are more likely to report strained relationships with friends and family as a result of excessive worry.

Furthermore, men are more likely to have co-morbid alcohol and substance abuse while women have higher rates of co-morbid mood and anxiety disorders.

The prevalence of SAD is higher in women (5.7%–15.5%) compared to in men (4.2–11.1%). Women are more likely to fear being interviewed, speaking to an authority figure, speaking up at meetings, eating and drinking in front of people, and taking important exams.

Women also report a higher number of social fears and a greater incidence of situational panic attacks. They are also more sensitive to interpersonal threats (eg angry facial) and social rejection compared to men. Men, on the other hand, tend to be more affected by achievement stress.

Specific phobias have the earliest onset of all anxiety disorders and are more than two-fold as prevalent in girls and adult women. The lifetime prevalence of specific phobia in adults are between 6%–12% in men and 12%–27% in women. Women tend to have more phobias about animals (insects, snakes, dogs) and the environment (eg darkness, storms, heights) compared to men. In men, height phobia is the most common type (3.3%–6.3%), while it ranks third for women.

Prior to puberty, the prevalence rate of MDD (5%), and symptoms are similar in boys and girls. However, once ovarian cycling kicks in (around the age of 13), MDD prevalence in girls skyrockets, which may be explained by the significant increase in oestrogen levels during this time. Girls with a family history of MDD are at greatest risk.

Furthermore, the higher prevalence of MDD in adolescent girls may also be because they experience more objective and subjective stressors than boys (eg interpersonal stress).

In adulthood, women experience MDD at roughly twice the rate of males until late middle age when women transition to menopause. During menopause, the risk for relapse is four- to six-fold greater for women with a history of MDD and two- to three-fold for those with no history of MDD during their childbearing years. The risk for MDD appears to decline in the years post-menopause and similar rates are reported in both sexes.

While women have higher rates of anxiety and depression than males, males tend to experience symptoms of depression more severely but are less likely to sought treatment due to the perceived shame of seeking help.

Under-diagnosis and under-treatment of male depression can lead to prolonged periods of depression and higher suicide rates in men as mentioned above. Attempted suicide rates are highest in adolescent boys, and suicidal commitment risk continues in men aged >60.

Depressed men often experience a loss of control, a hidden self, and substance use or abuse, which may cause them to commit suicide as a definitive means of eliminating their sense of a loss of control.

A recent study published in PLoSOne indicates that ‘minimally adequate’ treatment for MDD ranged from 23% in high-income countries (HICs) to 3% in low- and lower middle-income countries (LMICs). More than 75% of people with MDD live in LMCs). However, even in HICs where treatment rates are comparatively higher, many individuals failed to receive a level of care consistent with practice guideline recommendations. The authors also found that people >50-years tend to seek help more compared to their younger counterparts, and as expected, women accessed treatment more often than men.

Do men and women respond differently to antidepressants?

In their study comparing the efficacy of these agents, Cipriani et al included placebo-controlled and head-to-head trials of 21 antidepressants used for the acute treatment of adults (≥18 years old and of both sexes) with a confirmed diagnosis of MDD. Primary outcomes were efficacy (response rate) and acceptability (treatment discontinuations due to any cause).

Do men and women respond differently to antidepressants?

The jury is still out on this one due to a lack of standardisation of studies. Some studies show a sex difference, while others don’t. For example, studies have shown a significantly greater therapeutic response to imipramine, a tricyclic antidepressants (TCA), in men compared to women.

Others suggest that women may respond better to SSRIs than men. Studies, which employed the Hamilton Depression Rating Scale (HAM-D) as the primary efficacy assessment for SSRI treatment, showed that women had a 15%, 23%, and 40% greater improvement than males. Younger women treated with a SSRI showed greater response than men and older women (>44-years).

Vermeiden et al found a differential sex response based on the antidepressant used. Males responded significantly better to imipramine than premenopausal women, but the latter responded better to fluvoxamine than men.

An atypical depression study produced mixed findings: whereas monoamine oxidase inhibitors (MAOIs) demonstrated superiority over TCAs in women, the opposite was true in men.

Other studies have shown no sex differences in the efficacy of antidepressants. Venlaxafine, a SNRI, and SSRIs were both shown to produce comparable responses in men and women.

Furthermore, Hildebrandt et al showed no sex effect on the efficacy of the TCA clomipramine, the SSRIs citalopram and paroxetine, and the MAOI moclobemide.

A 2010 analysis by Kornstein et al pooled nine clinical trials of outpatients aged 18 years or older with MDD who received desvenlafaxine or placebo for eight weeks. They found that desvenlafaxine generally improved depressive symptoms regardless of sex.

In 2014, Kornstein et al performed a secondary analysis of a multiphase, multicentre, double-blind study in which adult outpatients with recurrent MDD were randomly assigned to 10 weeks of acute phase venlafaxine extended release or fluoxetine. They found no observed sex difference in the response to treatment.

Choosing the right agent for the right patient at the right time plays a vital role in improving adherence to treatment. Park and Zarate recommend that the selection of an antidepressant should be guided by adverse-effect profiles as well as by the patient’s coexisting psychiatric disorders, specific symptoms, and treatment history.

Treatment selection should also include consideration of the patient’s personal and family history of medication response and side effects, his or her drug preference, and cost and accessibility (eg medical scheme coverage).

Park and Zane further recommend that a treatment trial should begin at a low dosage, with dose adjustments typically occurring every two weeks. Although improvement may be noted at as early as two weeks, relief of symptoms may not be seen for eight to 12 weeks (at an adequate dosage).

If the initial trial does not yield substantive improvement, switching to another first-line antidepressant (of the same or a different class) is appropriate. Psychotherapy should also be considered. Numerous studies have confirmed that the combination of pharmaco- and psychotherapy is more effective than pharmacotherapy alone.

If partial improvement is noted at the maximally tolerated dose, adding an antidepressant of a different class, or targeting residual symptoms with other treatments may be an appropriate next step.

Psychiatric consultation is recommended if combined therapy or use of a treatment option other than first-line therapy is being considered. Once remission is achieved, maintenance antidepressant treatment to decrease the risk of relapse should generally be continued for at least six months.

For patients at high risk of relapse (eg two or more past episodes, residual symptoms, or a history of prolonged or severe symptoms), maintenance treatment should be considered for two years or more.

Recurrence of symptoms is common after an index episode. Longitudinal studies have shown recurrence rates of 26% within one year and 76% within 10 years.