Cough is one of commonest and distressing symptoms of lung disease and is a frequent problem encountered in general as well as hospital practice. 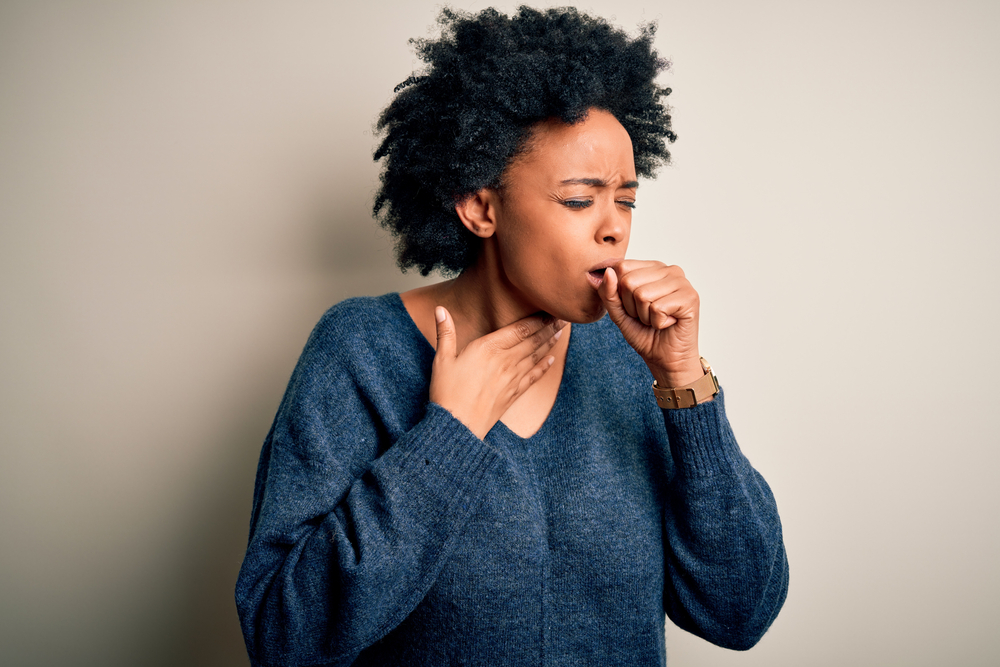 Bromhexine is an oral mucolytic agent

Cough is a reflex phenomenon occurring when sensitive receptors located in the larynx and upper airways are activated. These receptors generate information that reaches the central nervous system, although the central organisation of cough reflex loop is poorly understood. The afferent pathways originate in receptors situated under and between airway epithelial cells. Most are rapidly adapting receptors (RAR) linked to myelinated fibres of the vagus nerve, which can be directly stimulated by cough-inducing agents other receptors generate information, carried by non myelinsed C fibres.

When activated, these receptors release neuro peptides leading to neurogenic inflammation that can also activate RARS. The threshold of the cough reflex and its expression depends on a complex interaction between RARS and C fibre receptors with peripheral and central components.

Coughing is the body’s way of removing foreign material or mucus from the lungs and upper airway passages, or of reacting to an irritated airway, A cough is only a symptom, not a disease, and often the importance of a cough can be determined only when other symptoms are evaluated.

A non-productive cough is dry and does not produce sputum. A dry, hacking cough may develop towards the end of a cold or after exposure to an irritant, such as dust or smoke.

There are many causes of a non-productive (dry) cough, such as:

In terms of asthma, the inhaled route of treatment is currently preferred to minimise systemic effects.

Other symptoms may include wheezing, shortness of breath, or a feeling of tightness in the chest Blockage of the airway by an inhaled object, such as food or a pill.

The many causes of a productive cough.

It is normal to have a productive cough with a common cold. Coughing is often triggered by mucus that drains down the back of the throat. After a common cold, a dry cough may last several weeks longer than other symptoms and often gets worse at night.

A productive cough could be a sign that a disease such as chronic obstructive pulmonary disease (COPD) is getting worse or that the patient has an infection.

An infection of the lungs or upper airway passages can cause a cough. A productive cough may be a symptom of pneumonia, bronchitis, sinusitis or TB.

Nasal discharge (postnasal drip) draining down the back of the throat. This can cause a productive cough or the feeling that you constantly need to clear your throat. Experts disagree about whether a postnasal drip or the viral illness that caused it is responsible for the cough.

Smoking or other tobacco use

A productive cough in a person who smokes or uses other forms of tobacco is often a sign of lung damage or irritation of the throat or oesophagus.

Stomach acid backing up into the oesophagus

This type of coughing may be a symptom of gastro oesophageal reflux disease (GORD) and may awaken patients from sleep.

Bronchodilators are central in the treatment of airway disorders. They are the mainstay of the current management of COPD and are critical in the symptomatic management of asthma.

Bronchodilators work through their direct relaxation effect on airway smooth muscle (ASM) cells. At present, three major classes of bronchodilators, ß2-adrenoceptor (AR) agonists, muscarinic receptor antagonists, and xanthines are available and can be used individually or in combination.

Salbutamol is generally well tolerated. The modern era of selective Br-AB agonists did not begin until the discovery of salbutamol. A major limitation of the Br-AR agonists in use during the 1960s and 1970s was their short duration of action, typically four-six hours.

Salbutamol has negligible ß-AR activity at recommended clinical doses and demonstrates a substantial greater selectivity between ß2– and ß1-ARs than any other product previously available.

In vitro tests that used guinea pig isolated atria for ß1-ARs and tracheal preparations for ß2-ARs, respectively, documented that isoproterenol has equal affinity for ß1– and ß2-ARs, orciprenaline is slightly more selective for ß1-ARs, whereas salbutamol is more selective for ß2-ARs. It is not surprising, therefore, that salbutamol has approximately an equivalent potency at relaxing human isolated bronchi in vitro Salbutamol has no effect on the maximal response to histamine, whereas epinephrine reduces it by 54% in vitro. ln contrast, salbutamol is more potent in vivo.

The Medicines and Healthcare Products Regulatory Agency (MHRA) in the UK assessed the risk: benefit profile of salbutamol vs orciprenaline in 2009 and found that the salbutamol syrup produced a significantly greater peak magnitude of bronchodilation than orciprenaline (29% vs 20% above baseline, respectively; p<0.05) on treatment day one. Importantly, salbutamol also had a significantly longer duration of action (eight hours vs three-four hours; p<0.05). This additional benefit was maintained throughout the study with a similar profile observed on day 28. In terms of risk, due to its lack of ß2-selectivity, orciprenaline produces similar increases in heart rate and contractile force as isoprenaline, which may explain the substantially raised EBGMs for the cardiac ADRs tachycardia and palpitations with orciprenaline use.

The risk: benefit profile showed lower empirical Bayes geometric mean (EGBM) values for salbutamol vs orciprenaline with a lower potential association between the drug and the palpitation and tachycardia reaction.

Other in vitro studies have also demonstrated that salbutamol acts as a partial agonist at ß2-AR compared with isoproterenol.

ln human isolated bronchi, salbutamol is a partial relaxant of ASM, whereas isoproterenol has greater efficacy (Goldie et al, 1986), Nonetheless, compared with isoproterenol, salbutamol is at least as potent a bronchodilator has a much longer duration of action, and is much less likely

After inhalation of salbutamol, maximum bronchodilation can be seen within 15 minutes of inhalation. Because of its rapid onset of action, which is a clear clinical advantage for the reversal of bronchoconstriction, salbutamol is usually considered the drug of choice as relief medication for symptoms of bronchospasm.

Salbutamol in combination with a mucolytic like bromhexine creates the ideal solution for a tight chesty cough. Bromhexine is a widely prescribed mucoactive drug used to treat respiratory conditions associated with mucus secretion disturbances. It is used as a secretolytic expectorant for the effective treatment of cough with phlegm.

Bromhexine hydrochloride is rapidly absorbed from the gastrointestinal tract and undergoes extensive first-pass metabolism in the liver. Its oral bioavailability is stated to be only about 20%. It is widely distributed to body tissues and is highly bound to plasma proteins. About 85% to 90% of a dose is excreted in the urine mainly as metabolites.

It has a terminal elimination half-life of up to about 12 hours. Bromhexine crosses the blood brain barrier and small amounts cross the placenta.

Bromhexine is used to treat respiratory disorders linked with viscid or excessive mucus. It is secretolytic, which means that it increases the production of serous mucus in the respiratory tract and makes the phlegm less sticky and thinner. This leads to secretomotoric effect and helps the cilia transport the phlegm out of the lungs. Cilia represent the tiny hairs that line the respiratory tract. For this reason, bromhexine is added to some anti tussive (cough) syrups.

Bromhexine acts on the mucus at the formative stages in the glands, within the mucus-secreting cells. Bromhexine disrupts the structure of acid mucopolysaccharide fibres in mucoid sputum and produces a less viscous mucus, which is easier to expectorate.

The mechanism of action is based on phlegm degradation, thereby easing coughs. It helps in enhancing the production of serous mucus in the respiratory tract and aids in the production of thinner and less viscous phlegm. This produces a secretomotoric effect by assisting the cilia in expectorating the phlegm out of the lungs. Due to this reason, it is often regarded as an important component of cough syrups.

Efficacy of bromhexine in children

In the paediatric population data from active-controlled and open studies together with a few placebo-controlled trials were reviewed. Infants and children of all ages were included in those studies, although results stratified per age groups were not available. Studies noted the following favourable outcomes with bromhexine therapy:

Antibiotic therapy in combination with bromhexine, in children with acute sinus inflammation demonstrated a significant reduction of nasal secretions and an improvement of rhinitis (p < 0.01). Furthermore, hyperaemia of the nasal mucosa was significantly reduced in the bromhexine group (p < 0.01).

Treatment with bromhexine and NAC show similar effects. Improvement of symptoms was observed with both treatments compared to baseline (p<0.01) The symptoms of cough, dyspnoea, and ease of expectoration, improved sooner in the bromhexine group.

Pharmacodynamics and mechanism of action: Bromhexine is an oral mucolytic agent with a low level of associated toxicity.

Contraindications: Bromhexine is contraindicated for use in patients with known hypersensitivity or idiosyncratic reaction to bromhexine hydrochloride (or any of the other ingredients in the product).

There are no known significant interactions with other medicines.

Precautions: Since mucolytics may disrupt the gastric mucosal barrier, bromhexine should be used with caution in patients with a history of gastric ulceration.

Clearance of bromhexine or its metabolites may be reduced in patients with severe hepatic or renal impairment.

Zanasi A, Mazzolini M, Kantar A. A reappraisal of the mucoactive activity and clinical efficacy of bromhexine. Multidisciplinary Respiratory Medicine 2017 12:7