Ear infections (otitis media) are one of the most common reasons for doctor visits and antibiotic prescription in the paediatric population. It is most prevalent among children between 6 and 24 months of age, and more than 80% of children will have experienced at least one episode of otitis media by the time they reach school-going age. Furthermore, approximately 60% of children will have at least one episode by 4 years of age. This article will focus on acute otitis media with tympanostomy tubes (AOMT) and acute otitis externa, also called swimmer’s ear. 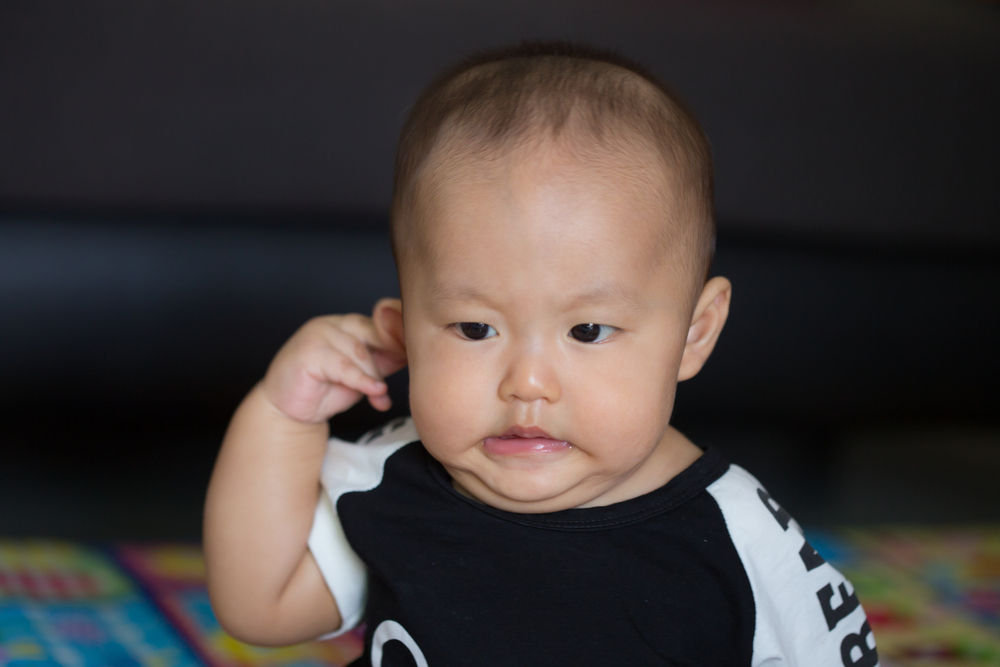 While most children have sporadic AOM episodes, a small percentage of them have recurrent AOM, which is defined as three or more AOM events in six months or four in a year [Image: Shutterstock]

AOM is caused predominantly by Streptococcus pneumoniae and nontypeable Haemophilus influenzae. While AOM can be caused by both bacterial and viral pathogens, it is most commonly thought to be a bacterial complication of upper respiratory tract viral infection. In most AOM patients, the nasopharyngeal microbiome is believed to be disrupted, allowing pathogenic bacteria to invade the middle ear via the Eustachian tube.

The following are known risk factors for AOM:

Breastfeeding may protect against AOM due to human milk’s immunomodulatory and anti-inflammatory properties. The most common and painful symptom is earache. In 15-20% of children with AOM, new onset ear discharge develops. Ear symptoms might be minor (tugging, rubbing, or clutching the ear), or they can be completely absent, especially in young preverbal toddlers. A fever, irritability, or sleep disturbance may be present in the child.

While most children have sporadic AOM episodes, a small percentage of them have recurrent AOM, which is defined as three or more AOM events in six months or four in a year. These reoccurring infections have a similar impact on children’s quality of life as childhood asthma. The microbiology is often more complex than in occasional episodes of AOM, but the most common bacteria are nevertheless Streptococcus pneumoniae, Haemophilus influenzae, and Moraxella catarrhalis.

Even though the treatment of individual episodes of children with frequently repeating AOM is similar to that of children with sporadic episodes, the recurring nature of the condition may warrant ENT consultation to rule out underlying pathology and discuss the benefits and drawbacks of treatment modalities to prevent future AOM recurrences, such as the insertion of tympanostomy tubes or antibiotic prophylaxis.

Clinically and microbiologically, acute otitis media with tympanostomy tubes (AOMT) varies from AOM with an intact tympanic membrane in that AOMT typically manifests with purulent otorrhea rather than earache and fever. Otorrhea may go away on its own or require antibiotic therapy. Treatment with systemic antibiotics or topical ear drops improves results, although bacterial resistance and ototoxicity should be considered when choosing a treatment regimen.

Otitis externa is more common in tropical than in temperate zones, mostly due to the high temperature and humidity in those parts. An estimated 10% of patients will develop it in their lives, and unlike most ear infections AOE is most common among adults and least common among children. Swimmers have a fivefold greater risk of developing AOE, which is why the ailment is sometimes known as “swimmer’s ear”.

The diagnosis of otitis externa is made based on a thorough medical history and physical examination, which includes an otosopic or otomicroscopic examination of the ear canal and tympanic membrane (if visible), as well as inspection of the pinna, surrounding lymph nodes, and skin. Auditory screening tests or an audiological examination should be undertaken to rule out inner ear involvement, especially if the tympanic membrane cannot be seen.

In AOE and AOMT, age-appropriate analgesia is important, with acetaminophen or ibuprofen typically being first-line agents. Antibiotics are indicated for all infants younger than six months, regardless of the severity of their symptoms. They are also indicated in children six months or older with unilateral or bilateral acute otitis media and presenting with severe signs or symptoms.

Antibiotics or observation is also indicated in children 24 months or older with unilateral or bilateral acute otitis media with mild symptoms. According to the most recent South African guidelines on the treatment of upper respiratory tract infections, antibiotics should be considered especially if:

According to studies, there is a lot of unwarranted antibiotic treatment for AOM, a lot of antibiotic resistance in Streptococcus pneumoniae isolated from AOM patients, including multidrug resistance phenotypes, and a lot of complications.  Higher-density populations, automedication, and the availability of over-the-counter antibiotics exacerbate the issue. As a result, antibiotics are misused and administered in excessive doses. This might explain why many doctors are hesitant to use amoxicillin as a first-line treatment.

For the treatment of AOMT, combination ciprofloxacin 0.3% and dexamethasone 0.1% in an otic solution are the recommended topical formulation, as per South African guidelines. This should be given four drops twice day for seven days. The correct technique for applying the drops is critical to the treatment’s effectiveness. Before injecting the drops into the external auditory canal, aural toilet by suctioning must be done, followed by tragal pressure to drive the drops through the tympanostomy tubes into the middle ear. Suctioning may be done at home with a disposable nasal aspirator.

Children aged six months to twelve years who have had bilateral otitis media with effusion (OME) for three months or longer with documented hearing difficulties, or children with recurrent AOM who have evidence of middle ear effusion at the time of tube candidacy assessment, are candidates for tympanostomy tubes. Children with a single episode of OME lasting less than three months, or children with recurrent AOM who do not have a middle ear effusion in either ear at the time of tube candidacy screening, are not candidates for tubes. Topical antibiotics, not oral antibiotics, should be used to treat children with tympanostomy tubes who have acute uncomplicated otorrhea.

AOE is usually treated locally. Chronic suppurative otitis media should be ruled out while using aminoglycoside antibiotics for local therapy. AOE is frequently treated with the antibiotic ciprofloxacin. It’s a fluoroquinolone-based broad-spectrum antibiotic that acts as a bactericide against gram-negative bacteria while having only minimal effects on gram-positive bacteria. It should be noted that antibiotic treatment of AOE without identifying the aetiological pathogen can lengthen the treatment duration while also increasing complication rates, mortality, and bacterial antibiotic resistance.

In a recent study, researchers compared topical ciprofloxacin (0.3%) and dexamethasone (0.1%) to ciprofloxacin alone in 201 children aged 6 months to 12 years with AOMT in a randomised, patient-masked, parallel-group, multicentre trial. Patients who received ciprofloxacin-dexamethasone twice daily for 7 days had a substantially shorter mean time to resolution of otorrhea (4.22 vs 5.31 days, P =.004) than those who received ciprofloxacin alone. Analysis was done after culture-negative patients were excluded. The addition of dexamethasone to the topical antibiotic resulted in a speedier resolution of otorrhea, according to the researchers.

It should be noted that ciprofloxacin is not ototoxic and is a broad spectrum, bactericidal antibiotic. In a multicentre, randomised, observer-masked, parallel-group study, ciprofloxacin-dexamethasone was compared to ofloxacin for the treatment of AOMT. The study included 599 children aged 6 months to 12 years who had AOMT for three weeks or less. Patients were given 4 drops of ciprofloxacin-dexamethasone twice daily for 7 days or 5 drops of ofloxacin twice daily for 10 days. Clinical cure was defined as the absence of otorrhea at day 18.

Oral antibiotics can cause systemic adverse effects including diarrhoea, vomiting, and rash in children, and their habitual use in common diseases like AOM contributes to the evolution of antimicrobial resistance. Topical antibiotics can reach the middle ear directly through tympanostomy tubes in youngsters. Topical antibiotic therapy does not cause systemic adverse effects in children and may reduce the selection pressure on commensal microorganisms. Antibiotic-corticosteroid eardrops has previously been shown to be more effective and less expensive than oral antibiotics in children with acute ear discharge in the presence of grommets.

Antibiotic resistance is increasing and lowering the amount of systemic antibiotics may be the most essential step toward decreasing resistance. Systemic antibiotics eradicate or suppress susceptible bacteria in the upper respiratory tract and the gut, allowing resistant strains to proliferate. This does not appear to be the case with topical therapy. Antibiotic resistance is uncommon with ototopical therapy, according to a new systematic evaluation of the literature. As a result, increasing the use of ototopical medicines while reducing the usage of systemic antibiotics might be part of the solution to the rising problem of antibacterial resistance.

Aminoglycoside antibiotics have been shown to be potentially ototoxic when administered directly to the middle ear. However, when topical antibiotics are administered during an active middle ear infection, the risk of ototoxicity is usually regarded to be minimal, and there appears to be no such risk with quinolone-containing drops.

AOMT and AOE are extremely common but many of the central principles of their treatment are flawed within the context of worsening antibiotic resistance around the globe. An alternative to the use of oral antibiotics is the use of treatments such as ciprofloxacin-dexamethasone combination therapy, which are less expensive, more effective and curbs some of the risk of antimicrobial resistance in AOMT and AOE.