Low uptake of contraception has been reported as the cause of up to 75% of unintended pregnancies in South Africa. Fear of side effects leading to discontinuation of contraception and fear of infertility are two frequently cited reasons for not using contraception in the literature. However, these reasons could indicate inadequate knowledge about the various safe and reversible contraception options available. Women with a Body Mass Index (BMI) greater than 35kg/m2 are less likely to use contraceptives than women with a BMI less than 25kg/m2. 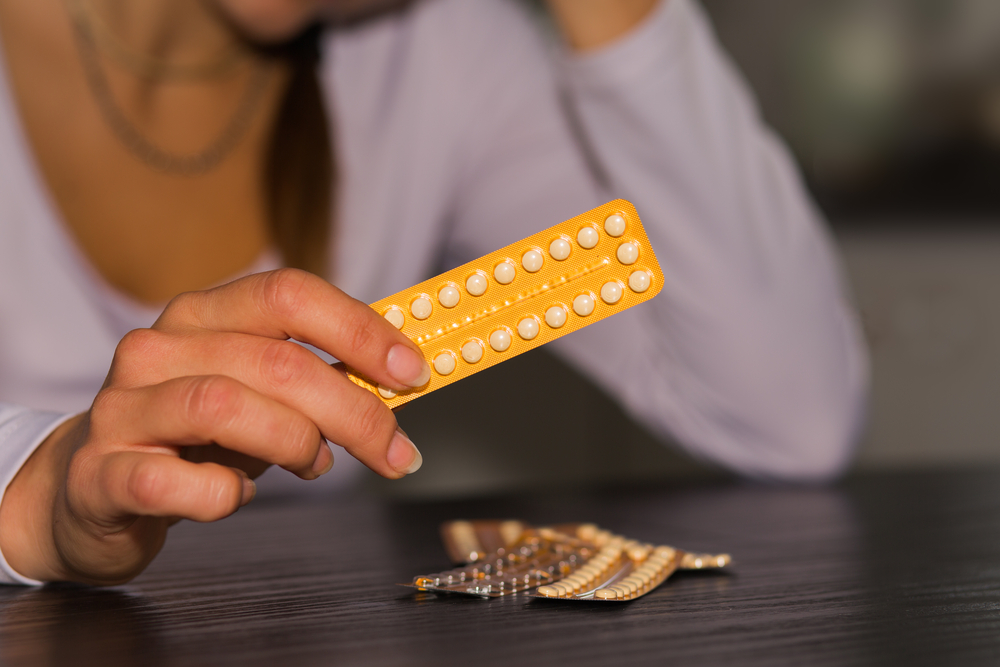 It is important for clinicians to address family planning needs of obese patients to prevent unintended pregnancy and subsequent obstetrical complications. Obese women of reproductive age would benefit from contraceptive counselling since they may underestimate their fertility due to irregular menstruation due to anovulation.

A significant proportion of reproductive-age women use combined oestrogen and progestin hormonal contraceptives (CHCs). The most used CHC is the oral contraceptive pill (12%) followed by the transdermal patch and vaginal ring (2%). Commonly used CHCs contain synthetic versions of oestradiol (E2, the primary oestrogen in humans) and progesterone, which inhibit production of follicle stimulating hormone and luteinizing hormone, thereby preventing ovulation.

Most data suggest CHC use does not cause weight gain. To date, there are no known studies that have examined the impact of CHCs on women with overweight/obesity who are actively trying to lose weight and/or maintain weight loss. Data from an 18-month behavioural weight loss trial provided an opportunity to compare weight loss and weight loss maintenance between premenopausal women using CHCs to premenopausal women not using CHCs as a preliminary investigation of the potential impact of CHC use on weight loss and maintenance. Changes in fat mass (FM), lean mass (LM), waist circumference (WC), self-reported dietary energy intake (EI) and macronutrient intake, and device-measured moderate-to-vigorous physical activity (MVPA) and steps were also compared between groups.

Caldwell et al (2020) did a preliminary investigation of the impact of combined hormonal contraceptive (CHC) use on weight loss during an 18-month behavioural weight loss trial.

Behavioural support was given in a group setting by a registered dietician and focused on dietary behaviour modification using cognitive-behavioural strategies. Group meetings lasted approximately 60 minutes and were held weekly during weeks 0-20, every other week during weeks 21-26, and every month during weeks 27-78. The targeted EI for women was between 1200-1600 kcal/day and the targeted macronutrient content was 20%-30% fat, 50%-55% carbohydrate, and 20%-25% protein.

To our knowledge, this is the first study to evaluate the impact of CHC use on weight loss among premenopausal women with overweight/obesity who were actively trying to lose weight. While our results are preliminary, we observed that both CHC and non-CHC achieved clinically meaningful (>5%) weight loss at six months within a comprehensive behavioural weight loss intervention. However, CHC exhibited weight regain of almost all initial weight loss between months six to 18, while weight remained essentially unchanged in non-CHC over the same time frame. Ultimately, only the non-CHC group exhibited clinically meaningful weight loss on average at 18 months. Changes in FM and WC followed a similar pattern.

A recent systematic review (Gallow et al, 2014) determined that a large effect of CHCs on body weight in free-living conditions was not evident, but there was insufficient evidence to determine the effects of CHCs on weight gain as the quality of reporting in these studies was generally poor. Notably, of the 49 studies included in the systematic review, only one had weight as the primary outcome. Existing placebo-controlled randomised trials to date do not suggest a causal association between CHCs and weight gain over 4-9 months following initiation. A longer study duration may be needed to observe significant changes in weight, or it is possible that CHC use does not impact weight in women who are not specifically seeking to lose weight or maintain weight loss. However, the differences observed in the current study between CHC and non-CHC in weight loss at 18 months within a behavioural weight loss intervention suggests that CHC use may have clinically meaningful effects on weight loss and weight loss maintenance. Because this was a secondary analysis, unobserved confounders may impact results as participants were not randomised to CHC or non-CHC. These findings are preliminary but suggest this is an important topic for future research. Replication in existing larger datasets and prospective, randomised trials are needed to elucidate the extent to which CHC use may influence weight loss and/or maintenance within a behavioural weight loss programme.

Several mechanisms through which CHCs may influence body weight have been hypothesised, including increased EI. In the current study, CHC users differed from non-CHC users in change in EI from months six to 18, consistent with the timeframe for weight regain in CHC. It is possible that an effect of CHCs on hunger and/or satiety made it more difficult for CHC users to sustain adherence to reduced calorie diet over 18 months. CHC use may affect appetite and eating behaviour because of the distinctly different hormonal profile of women using CHCs. Commonly used CHCs lead to lower levels of endogenous oestrogens and progesterone across the cycle, without cyclic fluctuation. A recent study by Lovett et al, 2017 measured serum concentrations of endogenous and exogenous (synthetic) oestradiol and progesterone in women receiving seven typical CHCs after adjusting for their relative binding affinity to their receptors. This study demonstrated that the median exogenous E2 exposure across a 28-day cycle in CHC users was similar to median endogenous E2 exposure. However, median synthetic progesterone exposure in CHC users was four-fold higher on average than median circulating endogenous progesterone. These higher progesterone levels have the potential to influence EI.

Progesterone has been shown to increase appetite and trigger binge- or emotional-eating. Several studies have examined the role of progesterone on EI, macronutrient intake, and hormones regulating energy metabolism in normally cycling women. These studies have found that women may consume up to 500kcal/day more, with a propensity for foods higher in carbohydrate or fat during the luteal phase, when levels of progesterone are higher. The baseline differences in fat intake between CHC and non-CHC observed in the current study are consistent with these studies. In addition, a pilot study demonstrated that pictures of high-calorie foods led to significantly greater activation in areas of the brain associated with food motivation relative to pictures of low-calorie foods or non-food objects eight weeks after injections of Depo Medroxyprogesterone Acetate (DMPA) (progestin) compared to baseline. These data suggest that progestins used for contraceptives may affect central appetite pathways, leading to increases in appetite as well as binge and hedonic eating, which then could lead to increases in overall EI and/or a change in macronutrient preference.

The increases in EI and weight gain observed in CHC users between months six to 18 may be associated with the higher levels of progestins, and lower levels of endogenous oestrogens.

CHC use could also influence weight regain through effects on PA and/or energy expenditure (EE). The researchers did not observe differences in device–measured MVPA or steps between CHC users and non-CHC users at baseline, and patterns of changes in these PA parameters over the 18-month intervention were similar in both groups. They are not aware of any other data on the impact of CHC use on free-living PA behaviour within or outside the context of a weight loss trial. “We did not measure daily EE in this study. However, oral contraceptive pill users have been shown to have a resting energy expenditure that is ~5% higher than non-users, which would theoretically enhance weight management. To our knowledge, there is no other published data on the impact of CHCs on total daily EE or its components. However, experimentally suppressing ovarian hormones with gonadotropin-releasing hormone receptor agonists in pre-menopausal women leads to reductions in total and exercise EE measured under the same conditions by whole room indirect calorimetry, which were only partially attenuated with synthetic oestradiol add-back,” they stated. The study explains that this could suggest that even if MVPA was not less in CHC users, the energy they expended per unit of activity could be lower, although future studies are needed to directly address this question.

Given this literature, and the differences in 18-month weight loss we observed, the impact of CHCs on PA and EE warrants further investigation.

If future studies yield similar findings, this could suggest that CHC use is an important factor to consider in obesity treatment and that patient’s goals for weight loss and maintenance may need to be considered when counselling patients on the best form of contraception.

In this secondary data analysis, CHC use was associated with weight regain after initial weight loss.

Obese women may avoid contraceptives because of fear that hormones may contribute further to weight gain. However, most studies have indicated that weight gain with many contraceptive methods is like age-related weight gain. A Cochrane review indicated no relationship between combination oral contraceptives or the patch on weight gain. The relationship between weight gain and progestin-only methods is also not well established. A Cochrane review found limited evidence of weight gain in five out of sixteen studies, with small changes in weight or body fat percentages with DMPA, and the levonorgestrel intrauterine device (LNG-IUD). Most studies found a weight gain of less than 2kg up to 12 months for these methods, and a possible increase in body fat and decrease in lean body mass compared to users of non-hormonal contraceptives. While the study on the LNG-IUD in the review reported a statistically significant small change in body fat percentage, this increase could be attributed to ageing.

The one contraceptive method that has been most associated with minimal weight gain in multiple studies is DPMA, with a typical gain of about 2.5kg in the first year. Mean weight differences between DPMA and the non-hormonal IUD in one study were 2.28kg at year one, 2.71kg at year two, and 3.17kg at year three. A study on DPMA use postpartum found a weight gain of about 1.5–3kg over one year of use. Patients who were overweight or obese prior to pregnancy had a higher risk for weight gain during this time. Those with a BMI of 26-35kg/m2 had a 3.9kg weight gain from baseline (six weeks postpartum) to one year vs non-overweight women actually lost weight.