Over the past few years, interest in the efficacy of probiotics in paediatric patients with specific conditions has steadily increased. Studies show that the addition of probiotics may have a positive effect on paediatric patients with acute infectious gastroenteritis (AGE), antibiotic-associated diarrhoea (AAD), Helicobacter pyloriinfection, necrotising enterocolitis (NEC), atopic diseases, and functional gastrointestinal disorders (FGDs).1-24 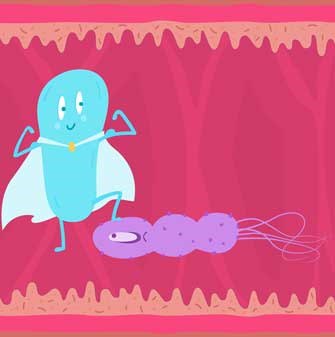 The most commonly used probiotics are bacteria of the genera Limosilactobacillus (including several new genera formerly under the Lactobacillus umbrella) or Bifidobacterium, which present either as single or mixed species.1,25

Paediatric conditions that may benefit from treatment with probiotics

AGE, caused by viral pathogens, is generally self-limiting. However, it is associated with significant morbidity in paediatric as well as elderly patients. It is estimated that globally, AGE accounts for more than 200 000 deaths in paediatric patients per year. Apart from diarrhoea, AGE can cause nausea, vomiting, anorexia, weight loss, and dehydration.26

A Cochrane review, which included 63 randomised controlled studies (RCT) involving 8014 paediatric patients, evaluated the effect of administering probiotics for the treatment of AGE. The reviewers found that probiotics reduced the duration of diarrhoea by about one day, as well as the risk of diarrhoea lasting more than four days.2

The prevalence of AAD in paediatric patients younger than two-years old is estimated to be around 11%.Another Cochrane review of 33 RCTs (n=6352), evaluated the efficacy of probiotics (Limosilactobacillus,Bifidobacterium, Streptococcus, S. boulardii or combinations), compared to placebo or other treatments in paediatric patients with ADD.4,27

The reviewers concluded that probiotics may be effective for preventing AAD. The incidence of AAD was 8% in the probiotic group, compared to 19% in the control patients.4

In another study, researchers showed that Limosilactobacillus as an adjunct to triple eradication therapy increased H. pylori eradication rates by about 13% (71% in the control group versus 84% in the probiotic arm).6

NEC is an ischaemic and inflammatory necrosis of the bowel after the initiation of enteral feeding in preterm infants. The incidence of NEC ranges from 2.6% to 28% and is associated with ~25% increased risk of mortality. Early symptoms indicative of NEC include feeding intolerance, abdominal distention, and discoloration as well as bloody stools.7,8

The 2020 American Academy of Paediatrics (APA) guidelines suggest using a combination of Limosilactobacillus and Bifidobacterium spp., or B. animalis lactis, or L. reuteri, or L. rhamnosus over no and other probiotics in preterm infants with NEC. However, the APA cautions that current evidence cannot support the routine use of probiotics – especially preterm infants weighing <1kg at birth. 9

Risk factors for developing allergy include a biological parent or sibling with existing or a history of allergic rhinitis, asthma, eczema, or food allergy.11

Between 10% and 30% of otherwise healthy newborns develop infantile colic. Colic is defined by Wessel’s criteria of crying or fussing for three hours or more a day, for three days or more per week, for three weeks in infants aged less than three months.13

Evidence suggests that in breastfed infants, L. reuteri decreases infantile colic, resulting in a mean difference of crying time per day at the age of three weeks of 56 min.14,15

Gastroesophageal reflux (GER) is defined as the passive passage of gastric contents back into the oesophagus with or without regurgitation and vomiting. This is caused by a transient relaxation of the lower oesophageal sphincter due to postprandial gastric distension. GER leads to troublesome symptoms of excessive crying, feeding refusal, failure to thrive, sleep disturbance, chronic cough or opisthotonos (a condition in which a person holds their body in an abnormal position).16

L. reuteri prevents regurgitation during the first month of life in breast-fed term infants. A RCT compared 40 infants who received probiotic supplementation or placebo and showed, when treated with L. reuteri 108 CFU daily for four weeks, a decrease in the number of regurgitation episodes a day.17

Another RCT studied the impact of L. reuteri during the first three months of life on the onset of colic, reflux, and constipation in term children. The study showed a significant difference for regurgitation episodes a day, 2.9 versus 4.6 in the probiotic and the placebo group, respectively.18,19

Irritable bowel syndrome is a type of functional abdominal pain (FAP) disorder. The paediatric Rome IV criteria define it as: abdominal pain for at least four days per month (at least two months prior to diagnosis) associated with a change in frequency of stool and a change in appearance of stool.20

A RCT – involving paediatric patients between six- and 16-years with confirmed diagnosis of FAP – compared the efficacy of L. reuteri in reducing the frequency and intensity of pain, compared to placebo. The authors found that paediatric patients in the L. reuteri arm had significantly lower pain intensity compared with the placebo controls. They concluded that L. reuteri reduces perceived abdominal pain intensity, which may encourage clinicians to use this probiotic in children with FAP.21