IDegAsp is a co-formulation of long-acting basal (insulin degludec) and rapid-acting bolus (insulin aspart) insulin (70:30 ratio) and is one of the most often described pre-mix formulations worldwide.1 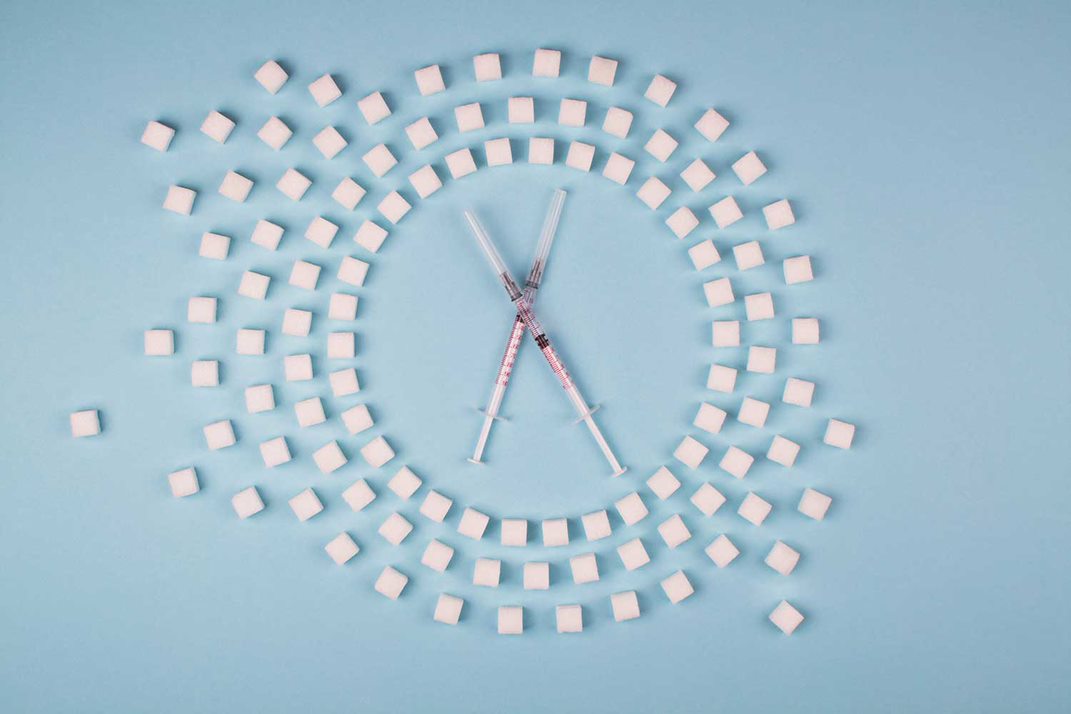 IDegAsp is a co-formulation of long-acting basal (insulin degludec) and rapid-acting bolus (insulin aspart) insulin (70:30 ratio) and is one of the most often described pre-mix formulations worldwide.1

Park et al (2017) compared the efficacy and safety of two titration algorithms for IDegAsp administered once daily with metformin in participants with insulin-naïve T2DM.3

The Stepwise algorithm titrated IDegAsp once weekly based on the lowest of three consecutive pre-breakfast SMPG measurements. In both groups, IDegAsp once daily was titrated to pre-breakfast plasma glucose values of 4mmoL/L-5mmol/L. Primary endpoint was change from baseline in HbA1c after 26 weeks.3

Participants were randomised to IDegAsp once daily at the main meal and IAsp at remaining meals (IDegAsp+IAsp), or IDet (once or twice daily) and IAsp at all meals (IDet+IAsp). Insulins were titrated to target plasma glucose of <5mmol/L at pre-breakfast (IDegAsp and IDet) and at pre-meal (IAsp).4

Adverse event rates were comparable between groups. Mean HbA1c decreased from baseline by 0.7% (IDegAsp+IAsp) and 0.6% (IDet+IAsp)7.6% or 7.7%, respectively), at week 52. The mean total daily insulin dose was lower with IDegAsp+IAsp than with IDet+IAsp (ratio: 0.87).4

The authors concluded that once-daily treatment with IDegAsp and IAsp as bolus insulin for remaining meals was associated with significantly lower risk of nocturnal confirmed hypoglycaemia, improved glycaemic control, and showed non-inferiority compared with IDet+IAsp, the standard of care in T1DM.4

According to Fulcher et al (2019) the majority of elderly patients (≥65 years of age) with T2DM will eventually require insulin therapy, but they are particularly vulnerable to hypoglycaemia and are challenging to treat.5

A combined analysis of the phase 3 BOOST Intensify Premix I and BOOST Intensify All trials has previously reported lower rates of hypoglycaemia during the maintenance period in patients with T2DM treated with IDegAsp twice daily vs biphasic insulin aspart 30 (BIAsp 30) twice daily.5

Fulcher et al’s post-hoc analysis examined the safety and efficacy of IDegAsp versus BIAsp 30 in elderly patients from the global population of these two trials, and also from the Japanese cohort of BOOST Intensify All.5

The team concluded that IDegAsp twice daily is efficacious in elderly patients and suggest there is no need for special safety precautions.5

The top four reasons given by physicians for a switch to IDegAsp included:2
1. To improve patient’s glycaemic control
2. To lower the risk of hypoglycaemia
3. The flexibility of the dosing regimen
4. Fewer injections required that basal and bolus insulin.

In the ARISE study, initiation with or switch to IDegAsp, led to:2
• Significant decrease in HbA1c: An overall change from mean baseline (9.7%) to a mean of 8.3%
• Significant decrease in overall fasting plasma glucose (FPG): An overall mean change from 10.9% to 8.2%
• Decrease in body weight: Patients lost a mean of 1kg weight from baseline
• Lower daily basal but higher prandial insulin dose for previous insulin users
• Numerical reductions in severe hypoglycaemic events (except GLP-1RA prior users): from 51(n=31) to three (n=3) at the end of the study
• Decrease in resource utilisation observed 12 weeks prior to the end of the study: 2
o Self-reported outpatient visits decreased from 1012 to 498
o Emergency visits decreased from 35 to 12
o Self-reported missed workdays decreased from 242 to 28.

At baseline, only 4.3% of patients reached the recommended HbA1c target of <7%. At the end of the study, 14.9% of patients managed to reach target.2

Expert panel recommendations on appropriate use of IDegASP in clinical practice6

The recommendations compiled by the panel of experts are aimed at helping clinicians with decision-making when prescribing IDegAsp for different patient populations including children and adults with T1DM or T2DM as well as pregnant, elderly, and hospitalised patients and varying practice patterns (insulin-naïve, insulin-treated, switching from basal, basal bolus and premix regimens).

IDegAsp in adult and paediatric patients with T2DM:
IDegAsp can be initiated directly in any (insulin-naïve) adult patient who failed to achieve adequate glycaemic control (HbA1c levels >2% of the individualised HbA1c target and/or HbA1c >8.5% despite optimal treatment with two and three oral antidiabetic drugs [OADs] such as metformin).

In adult patients with inadequately controlled blood glucose levels on an OAD, IDegAsp may be more effective – particularly in patients with HbA1c lower than 8.5%. The recommended starting total daily dose of IDegAsp is 10 units with meal(s), whereas using 0.1-0.2U/kg dose calculation may also be appropriate, and the individual dose adjustments should be performed at least after 48 hours, as this is the time required for IDegAsp to reach a steady state.

Switching from other regimens in insulin-treated patients

The lesser rate of nocturnal hypoglycaemia with IDegAsp as compared with basal insulin, owing to long-term efficacy of basal component, seems to be the one of the most important indications for switching to IDegAsp.

The switching should be performed 1:1 without dose reduction, while with dose titration based on FPG values as well as PPG values after the meal with injection, measured at least weekly.

Doses should be administered with the two largest meals of the day and should include carbohydrate. The expert panel also recommend switching to two-dose IDegAsp in patients with very poor glycaemic control (HbA1c >9%), with high FPG levels (>250mg/dL) or post-prandial glucose excursions after two meals. Twice daily dosing can be utilised as an alternative to a basal bolus regimen in patients with postprandial hypoglycaemia while using once daily IDegAsp treatment, or when an increase in the basal insulin dose is needed.

Switching from basal-bolus regimen
IDegAsp is considered suitable for patients who do not want to take multiple injections each day and may therefore provide an alternative to basal–bolus regimens.

This is an option for patients with T2DM and T1DM who use a high number of daily insulin injections (to enable lesser number of injections), with poor treatment adherence (to improve adherence), with nocturnal hypoglycaemia and with an increase in the basal insulin dose need.

Co-administration with other antidiabetic medications:
IDegAsp can be used in combination with most OADs and no additional considerations are required when combining IDegAsp with metformin or dipeptidyl peptidase 4 (DPP-4) inhibitors, which can each be continued at the same dose when IDegAsp is added. A reduction in insulin dose is necessary if sodium–glucose cotransporter 2 (SGLT-2) inhibitors are added to IDegAsp, and caution should also be taken when IDegAsp is used together with sulphonylureas (SUs).

IDegAsp therapy in children with T2DM:
The incidence of T2DM in adolescents has increased globally in recent decades, due to a rising obesity rates. A rapid decline in β-cell functioning in adolescents merits the use of insulin treatment. Initial treatment with metformin and/or insulin alone or in combination is recommended in adolescents with T2DM and marked hyperglycaemic (FPG ≥250 mg/dL and/or HbA1c ≥8.5%).

Although IDegAsp has not been the subject of clinical trials in adolescents with T2DM, analysis of efficacy and safety using data from adolescent and adult patients with T1DM and adults with T2DM, supports the use of IDegAsp in adolescent patients with T2DM.
The expert panel recommends that in children with T2DM who need treatment intensification on metformin, IDegAsp can be used instead of basal bolus therapy (similar to adult age group). Those with diabetic ketoacidosis should be initiated on intensive treatment and IDegAsp may be used.

Use in adult and paediatric patients with T1DM
Adult patients:
IDegAsp is mainly used as a treatment for T2DM and is not commonly used to treat patients with T1DM. However, in adults with T1DM, IDegAsp as part of a simplified basal-bolus regimen with IAsp has been shown to improve overall glycaemic control and was non-inferior to IDet + IAsp basal–bolus therapy (HbA1c improved by 0.75% with IDegAsp and 0.70% with IDet to 7.6% in both groups) as well reducing the risk of nocturnal hypoglycaemia (3.71 vs. 5.72 episodes/patient-year.

In adult patients with T1DM, IDegAsp +IAsp treatment can be used to simplify basal bolus treatment in terms of fewer injections, better FPG control, lesser rate of nocturnal hypoglycaemia and reduction in insulin dose. The dose should be individualised. If the patient is taking a fixed amount of carbohydrates, IDegAsp +IAsp is recommended.

Paediatric patients:
IDegAsp treatment is the preferred insulin regimen because of its ease of use (single injection pen) in paediatric patients who frequently miss injections. However, usually at least two additional mealtime insulin boluses are required. There is no clinical experience with the use of IDegAsp in paediatric patients aged <2 years and special caution should be taken in children aged between two and five years. Clinical data suggest a higher risk of hypoglycaemia in this age group compared to those aged between five and 17 years. IDegAsp can be recommended in T1DM children (>2-years of age) with the number of injections increased due to insufficiency of long-acting insulin, in those who frequently skip injections with subsequent risk of diabetic ketoacidosis, those with fear of injection, and in those need alternative insulin regimens due to inability to use insulin pump.

Use in special patient populations
Pregnant patients:
Insluin aspart, the short acting component of iIDegAsp, has been used for several years in the treatment of pregnant patients either with gestational diabetes or in women with T1DM or T2DM. However, the long acting component (insulin degludec[IDeg] insulin is not approved in pregnancy yet. Until more data is obtained, the expert panel recommends against using
IDegAsp in pregnant women.

Hospitalised patients:
Rapid-acting insulin is generally preferred to combination insulins in hospitalised patients, due to greater flexibility in titrating. IDegAsp may not be practical for titrating doses for in-patients given the time taken for the IDeg component to reach steady state, and the fixed ratio of the IAsp content.

This may be pertinent when there are changes to diet, appetite, cases of sepsis and the need to take corticosteroids. In such cases, an alternate insulin regimen may be more appropriate (eg basal–bolus insulin or premix insulin).

Accordingly, the expert panel recommends that for major operations, IDegAsp treatment needs to be discontinued 24 hours before an operation. For elective minor interventions (eg colonoscopy), the insulin dose may need to be decreased about three days prior to the procedure or patients may be switched from IDegAsp to BIAsp 30 twice daily or basal insulin or basal-plus-bolus insulin.

In patients hospitalised for evaluation purposes, basal plus-bolus treatment may be a good alternative or, treatment can be continued with IDegAsp in those without injection or poor oral intake.

Elderly patients:
The flexibility in dose timing of IDegAsp may be advantageous in elderly patients being treated in nursing homes or at home by visiting nurses given the likelihood of delay in care, while SUs should be discontinued when IDegAsp treatment is started, owing to the increased risk of hypoglycaemia.