It was approved by the American Food and Drug Administration in 2010 for use in children aged two years and above.1,3 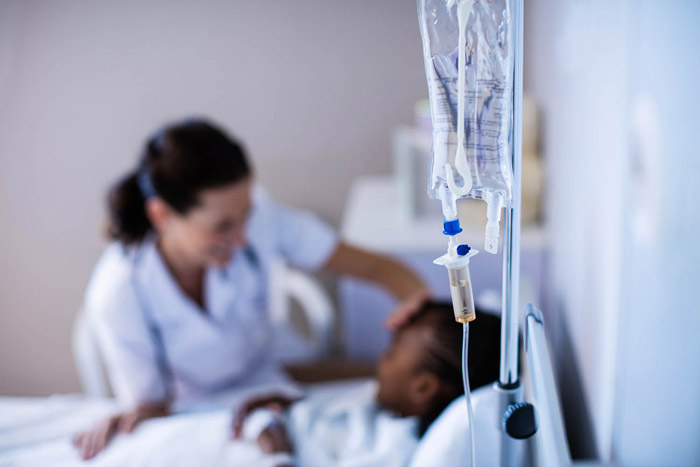 IV paracetamol is prominently indicated for post-operative analgesia and has shown efficacy in reducing postoperative nausea and vomiting when used prophylactically.

Indications for the use of IV paracetamol

The indications for the use of IV paracetamol include:

IV paracetamol is prominently indicated for post-operative analgesia and has shown efficacy in reducing postoperative nausea and vomiting when used prophylactically. Several studies have demonstrated the adequacy of analgesia while demonstrating less sedation and shorter recovery times.3

Despite the proven efficacy of paracetamol as an analgesic the exact mechanism of action remains incompletely understood. It acts at both central and peripheral components of the pain pathway.2,3

Lastly, paracetamol also appears to act on both N-methyl-D-aspartate (NMDA) and cannabinoid CB1 receptors in the brain and spinal cord.2,3

IV paracetamol has a rapid onset of action with analgesic and antipyretic effects within 15 and 30 minutes, respectively.2,3

The speed of onset of analgesia is due to a rapid time to maximum plasma concentration of 15 minutes as compared to 45 minutes (oral) and three to four hours (rectal).3

The safety profile of IV paracetamol is favourable compared to either non-steroidal anti-inflammatory drugs (NSAIDs) or opioids.2 Adverse effects include nausea and vomiting, constipation, pruritis, agitation and atelectasis.3

Significant adverse reactions are extremely rare (<1/10000) and include the development of asthma, rhinoconjunctivitis and eczema in adolescents.1,2

The dosing of IV paracetamol in children depends on both age and weight. Infusions of IV paracetamol are given over 15 minutes with a minimum interval of four hours between doses. Table 1 is largely based on the dosing recommendations of the Medicines and Healthcare products Regulatory Agency (MHRA) of the United Kingdom(UK).1,3 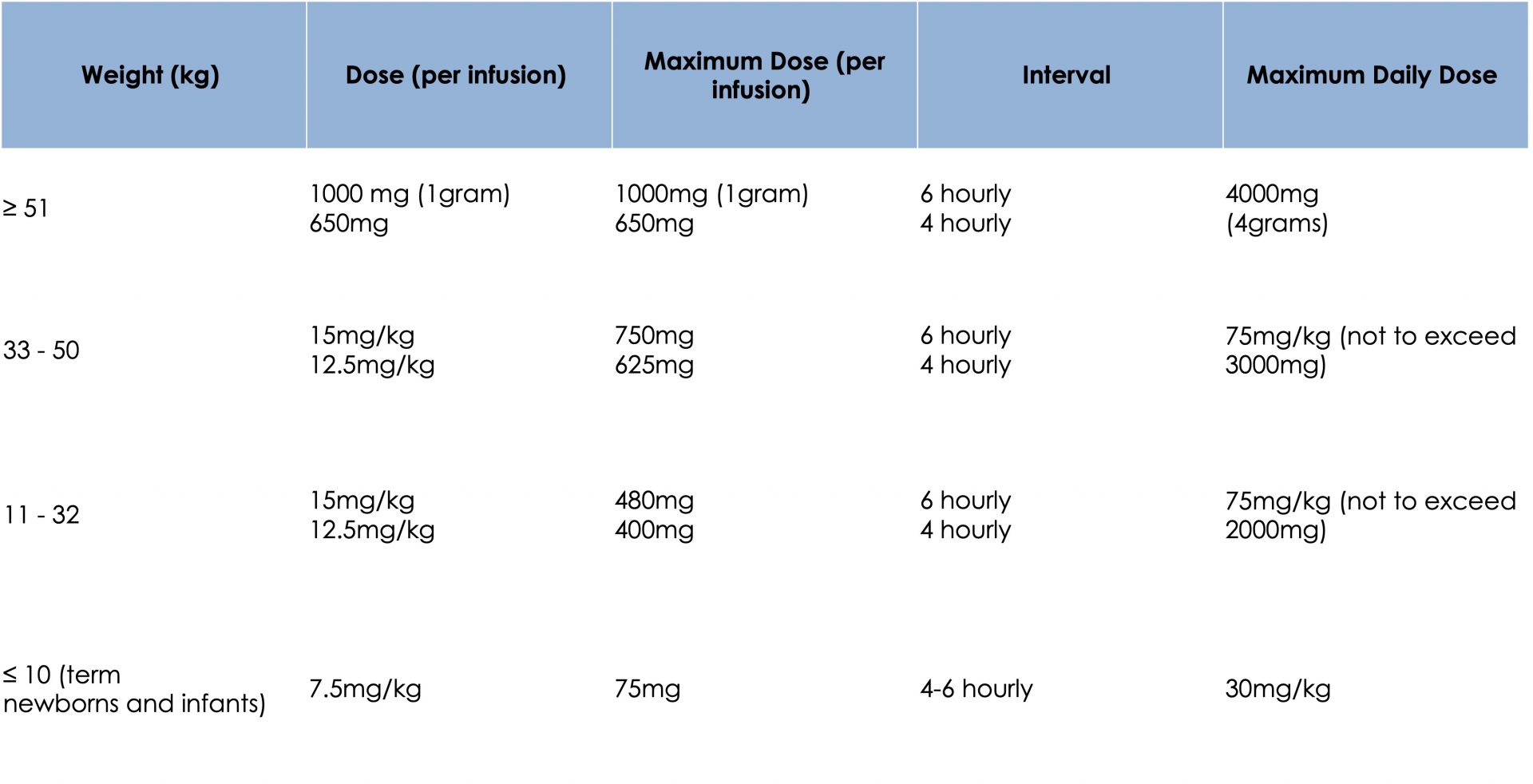 The MHRA dosing regimen for infants, term and preterm neonates has recently been challenged due to concerns of underdosing. The details of the two proposed regimens (based on gestational age) are as follows:

IV paracetamol is metabolised by the liver predominantly via glucuronidation and sulfation. At higher doses, additional metabolism via the cytochrome p450 pathway produces N-acetyl-p-benzoquinone (NAPQI) which rapidly conjugates with glutathione and is excreted in the urine.1,2

The majority (90%) of the metabolised drug is excreted in urine within 24 hours with <5% of the drug excreted unchanged. With toxic doses, the excess of NAPQI produced depletes available glutathione resulting in hepatocellular damage by unconjugated NAPQI.1,2

While IV paracetamol remains contra-indicated in patients with severe and active liver disease, it is safe to use at recommended doses in patients with mild to moderate liver dysfunction.1,2

There is a greater risk of toxicity in patients predisposed to lower levels of glutathione (chronic malnutrition, severe dehydration) even within recommended dosing limits.1,3

Caution should also be exercised in neonates with unconjugated hyperbilirubinaemia.6

Drug clearance is slower in children younger than two years of age so six-hourly dosing intervals is preferable. Furthermore, as a result of delayed clearance due to severe renal dysfunction (creatinine clearance <30ml/min), the minimum dosing interval should be increased from four to six hours.2

With respect to infusion, IV paracetamol is physically incompatible with both diazepam and chlorpromazine hydrochloride.3

Lastly, studies in adults have raised concerns of decreased blood pressure upon administration of IV paracetamol. This has recently been investigated among paediatric patients.

A retrospective chart review of 100 patients found no haemodynamically significant impact following the administration of IV paracetamol. Decreases in blood pressure were usually from supra-normal levels to normal levels, due to the relief of pain.7

However, a second study among 45 children with septic shock found a decline in mean arterial pressure of at least 15% following 32.4% of doses which necessitated the administration of either a fluid bolus or increase in inotropic dose after 11.4% of doses.8

Thus, among haemodynamically unstable children, the administration of IV paracetamol may result in clinically significant hypotension and should be used with caution.