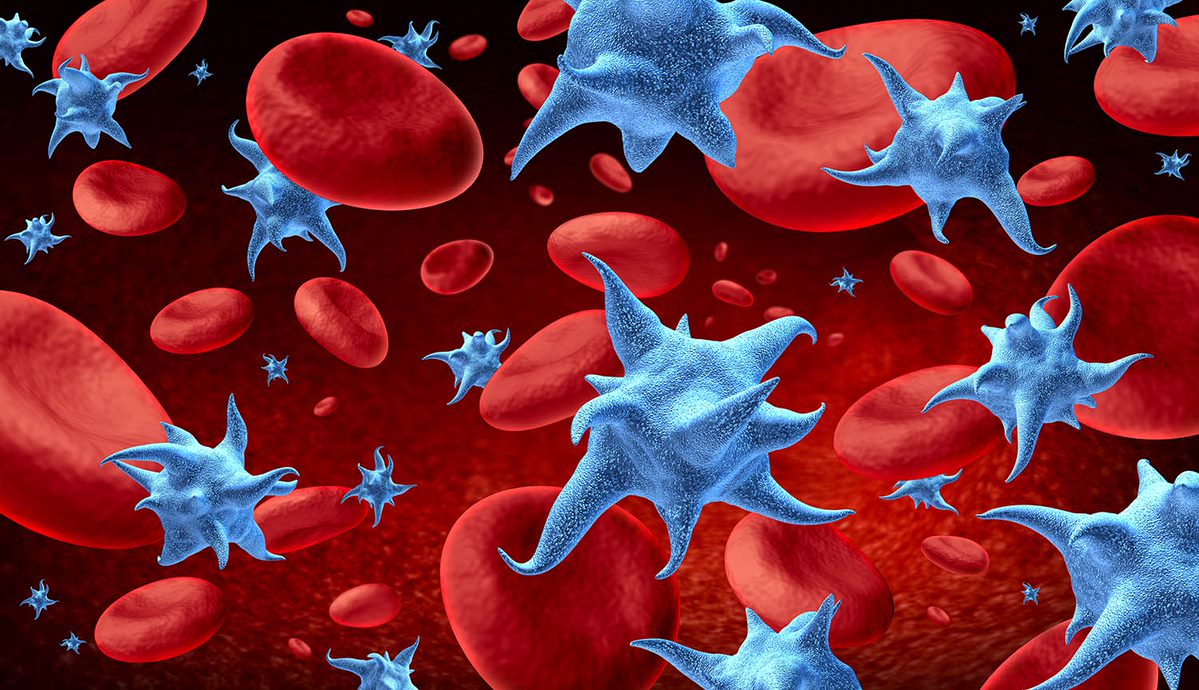 Some 80% of children with ITP achieve complete remission in three to six months, while 50% of adult patients develop chronic disease

The incidence of ITP is about 1.6-3.9 per 100 000 patient-years. More women are affected than men. In children, the annual incidence is estimated to be between one and 6.4 cases per 100 000 population. ITP in children is usually self-limited. Some 80% of children achieve complete remission in three to six months, while 50% of adult patients develop chronic disease.1,2,3
Bleeding is the most common manifestation of ITP ranging from mild/petechiae, purpura, epistaxis, to severe life-threatening bleeding in the gastrointestinal tract, the urinary tract, or intracranial haemorrhage. Fatigue and low quality of life are also of significant concern in patient with ITP.1

ITP without a secondary cause or underlying disorder is known as primary ITP. Primary ITP is further categorised into three phases based on the timing and continuation of symptoms.3

The antibody-coated platelets are then cleared by tissue macrophages, specifically in the spleen, at an accelerated rate, leading to a shortened half-life of the platelet.3

These same antibodies also inhibit platelet destruction, leading to thrombocytopenia. However, an alternative mechanism has also been proposed involving T-cell mediated cytotoxicity. In this mechanism, cytotoxic T cells attack megakaryocytes in the bone marrow. However, the mechanism is not well understood.3

In either mechanism, there is always an inciting event that sets off the cascade to platelet destruction. The two most common inciting events include infection or immune alteration.3

Cases of ITP associated with immune alteration occur due to autoimmune conditions causing loss of peripheral tolerance and promote the development of auto-antibodies.3

Management of adults with ITP

No major changes were made to the 2019 updated American Society of Hematology (ASH) guidance on the management of ITP in children and adults compared to the ASH 2011 guidance. The only exceptions are for thrombopoietic receptor agonists (TPO-RAs) that are finding significant space in the ITP management armamentarium in the latest guidelines and steroids being recommended as a first-line therapy.4

Little has changed for the diagnosis of ITP, and the document reiterates the 2011 guidelines of bone marrow testing not being necessary to establish a diagnosis. The treatment versus observation recommendation remains the same in 2011 and 2019 guideline for a child with newly diagnosed ITP with no/mild bleeding, irrespective of platelet count. Preference has been given to observation in the 2019 update.4

One of the highlights of this update is advocating steroids as the first- line pharmacological treatment (instead of earlier recommendation of single dose intravenous immunoglobulin [IVIg] or steroids).4

A steroid is preferred as a first-line treatment taking into consideration equal effectiveness, cost, and higher adverse events with the use of either IVIg or anti-D Ig.4

In adults with newly diagnosed ITP and a platelet count of <20 000/microL who are asymptomatic or have minor mucocutaneous bleeding, admission to the hospital rather than management as an outpatient is suggested.

In adults with newly diagnosed ITP, the guideline suggests either prednisone (0.5-2.0mg/kg per day) or dexamethasone (40mg per day for four days) as the type of CS for initial therapy.

In adults with ITP lasting >3 months who are CS-dependent or have no response to CS, the guideline panel suggests a TPO-RA rather than rituximab. Each of these second-line treatments may be effective therapy and therefore the choice of treatment should be individualised based on duration of ITP, frequency of bleeding episodes requiring hospitalisation or rescue medication, comorbidities, age of the patient, medication adherence, medical and social support networks, patient values and preferences, cost, and availability. Patient education and shared decision-making are encouraged. If possible, splenectomy should be delayed for at least 12 months after diagnosis because of the potential for spontaneous remission in the first year. Patients who value avoidance of long-term medication may prefer splenectomy or rituximab.

Patients who wish to avoid surgery may prefer a TPO-RA or rituximab. Patients who place a high value on achieving a durable response may prefer splenectomy or TPO-RAs.

Management of children with ITP

Although ITP is the most common bleeding disorder in children in South Africa, studies on paediatric management are limited. A 2008 South African study by Stefan and Wessels note:5

The dearth of evidence on which to build up (local) management guidelines is mainly due to the relative rarity of the disease, its self-limiting character, which makes it suitable for treatment by doctors with various levels of specialisation, and the lack of co-operation between specialists from different geographical areas with regard to patient data recording and randomised studies.5

5. Stefan DC and Wessels G. A survey of the management of idiopathic thrombocytopenic purpura in South Africa: Do we need guidelines for developing countries? SAJCH, 2008.