Globally, weight statistics paint an alarming picture: approximately 1.9 billion adults are overweight and 600 million are obese worldwide. In the United States alone, obesity is now the most prevalent chronic disease and obesity-related healthcare spending is estimated at $147 billion annually. This may reflect behavioural changes, particularly the easy availability and consumption of high‐calorie food, as well as an increasingly sedentary lifestyle. Within the last few decades, the increasing occurrence of obesity has led to progress towards pharmacological treatment options for weight loss. Identifying effective long-term treatment strategies for overweight and obesity is of paramount importance given the extent of the problem. 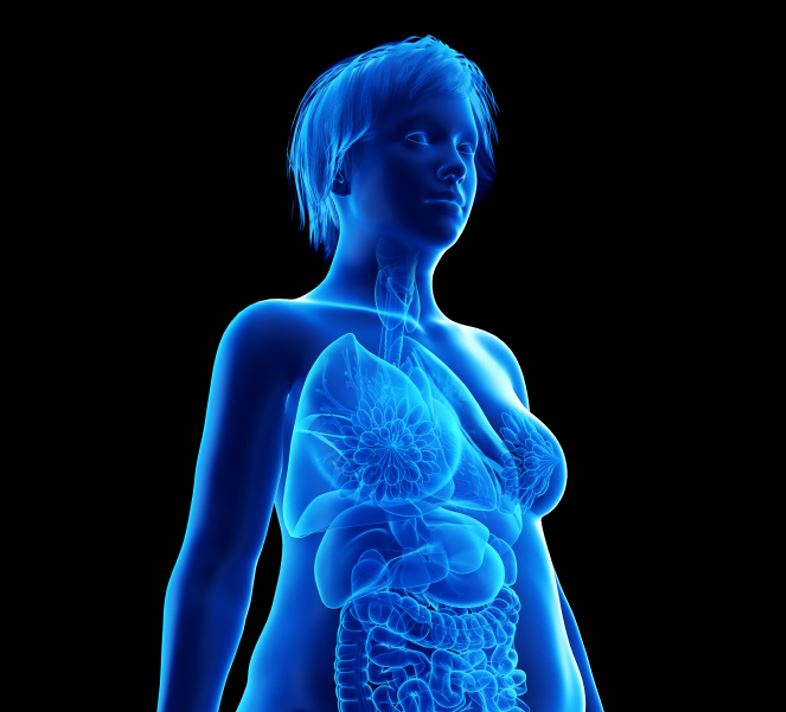 Within the last few decades, the increasing occurrence of obesity has led to progress towards pharmacological treatment options for weight loss [Image: Shutterstock].

The US Food and Drug Administration (FDA) approved six weight loss drugs (phentermine, orlistat, lorcaserin, naltrexone-bupropion, phentermine-topiramate, and liraglutide) for use in obese (body mass index [BMI] ≥30) or overweight (BMI ≥27) individuals with at least one weight-associated comorbidity (type 2 diabetes, hypertension, hyperlipidaemia). Most of these drugs work through CNS pathways that either reduce appetite or enhance satiety, with the exception of orlistat, which decreases the absorption of fat.

In the last few decades, it has become abundantly clear that the pathophysiology of obesity is complex, and new information regarding neuronal circuits that control food intake and their hormonal regulation has extended our understanding of energy homoeostasis. Each new signalling pathway discovered in the hypothalamus is a potential target for drug development in the treatment of obesity.

However, as these central pathways are involved in myriad functions, it is somewhat unsurprising that some pharmacotherapies have ultimately failed due to unexpected side effects that may only  be identified during clinical trials and sometimes many years following drug approval.

Modest weight loss of 5% to 10% among patients who are overweight or obese can result in a clinically relevant reduction in cardiovascular (CV) disease risk. This amount of weight loss can increase insulin sensitivity in adipose tissue, liver and muscle, and have a positive impact on blood sugar, blood pressure, triglycerides and high-density lipoprotein cholesterol.

All patients who are obese or overweight should be counselled on diet, exercise and other behavioural interventions. Weight loss secondary to lifestyle modification alone, however, leads to adaptive physiologic responses, which increase appetite and reduce energy expenditure.

Pharmacotherapy can counteract this metabolic adaptation and lead to sustained weight loss and may in fact be the most effective way to do so currently known to science. Anti-obesity medication can be considered if a patient has a BMI ≥30 kg/m2 or ≥27 kg/m2 with obesity-related comorbidities such as hypertension, type 2 diabetes, dyslipidaemia, or obstructive sleep apnoea, according to current European clinical guidelines. The efficacy of pharmacotherapy should be evaluated after the first three months and every three months thereafter. The Endocrinology guidelines 2015 state that efficacy should be evaluated at 3 months and if a patient has lost3 5% then the medication can be continued. However if the medication is not effective (< 5% weight loss) or there are safety or tolerability issues, the medication should be discontinued.

The FDA criteria for a drug to be approved for the treatment of obesity have been stringent since standard guidelines were issued in the mid‑1990s. The new drug must induce statistically significant placebo-adjusted weight loss of >5% at one year or >35% of patients should achieve >5% weight loss (which must be at least twice that induced by placebo). In addition, the FDA also requires that the medication show evidence of improvement in metabolic biomarkers, including blood pressure, lipid levels and glycaemic control.

In most countries, phentermine remains the most commonly prescribed anti-obesity medication. It has been used steadily since its initial approval in 1959. Phentermine is thought to reduce hunger by stimulating the release of norepinephrine in the hypothalamus and is indicated as an adjunct to lifestyle modification in individuals with a BMI of ≥30 kg m2 or 27 kg m2 in the presence of co‐morbidities (hypertension, diabetes, hyperlipidaemia). In a recent 2013 clinical trial, which evaluated differences in phentermine 15mg monotherapy compared with combinations, a weight loss of 5.1% was reported at 28 weeks. In another study, weight loss of 5-10% was achieved after 12 weeks of treatment in conjunction with a hypocaloric diet.

While phentermine’s safety profile has been well established, it is contraindicated in patients with cardiovascular disease, hyperthyroidism, glaucoma or a history of drug abuse and in pregnant women. It is commonly believed that phentermine should not be used for longer than three months due to the risk of cardiovascular AEs.

However, a 2019 study by Lewis et al found that recommendations to limit phentermine use to less than three months do not align with current concepts of pharmacological treatment for patients with obesity, instead indicating that longer-term phentermine users experienced greater weight loss without apparent increases in cardiovascular risk. This data provides reassurance that longer-term phentermine monotherapy is a reasonable treatment option in low-risk individuals. The large-cohort study also found that a longer duration of phentermine use was associated with clinically significant greater weight loss up to two years after initiating medication, with no observed increase in risk for incident cardiovascular events or death over three years of follow-up.

In terms of safety, a recent trial on the safety and efficacy of long-term phentermine use in a cohort of 13 972 patients (of which 84% were female) found that greater weight loss without increased risk of incident CVD or death was observed in patients using phentermine monotherapy for longer than 3 months. The study condoned the safety profile of longer-term phentermine use for low-risk individuals. Additionally, in a study of phentermine use among an obese Mexican population, 15mg and 30mg phentermine doses were compared at 3 and 6 months, with no increase in adverse effects between the 30mg and 15mg doses.

The longer-term safety of phentermine was evaluated in the SEQUEL trial in which the combination of phentermine and topiramate (Qysmia) was continued for 2 years.

From an affordability perspective, phentermine is an attractive option for patients since it appears to be equally effective when taken intermittently and continuously. In a study by Munro et al, the appetite-reducing effect of phentermine 30mg administered continuously and intermittently was evaluated against an inert capsule during a 36-week double-blind trial in 108 women. The mean weight loss was 12.2kg and 13.0kg for those who received phentermine continuously and intermittently respectively, compared with 4.8kg in the group treated with the dummy. The individual response to therapy was very variable, but irrespective of the method employed weight loss diminished with duration of treatment. The study authors concluded that there was no advantage in taking an anorectic continuously, since intermittent treatment is as effective, cheaper, and possibly safer.

Phentermine/topiramate is an extended release combination that was approved by the FDA in 2012. The combination drug has shown greater potential weight-loss effects than monotherapy alone for each while also reducing adverse effects. Although expensive, the combination drug has robust weight-loss potential. The individual components of the drug can be prescribed separately in available monotherapy dosages (phentermine 8mg, 15mg, 30mg and 37.5mg; topiramate 15mg, 25mg, 50mg, 100mg and 200mg).

Although topiramate monotherapy is not currently FDA-approved for the treatment of obesity, it has shown benefit in patients with emotional eating and binge-eating disorder and against weight regain following bariatric surgery. Topiramate is usually prescribed starting at 25mg per day for the first one–two weeks and is then increased in increments of 25mg monthly (to a maximum of 100–150 mg); dose and titration should be guided by clinical outcome.

Phentermine/topiramate combination therapy is not currently available in South Africa.

Orlistat is a potent and selective inhibitor of pancreatic lipase that reduces intestinal digestion of fat. The drug is available over the counter at a dose of 60 mg and a prescription dosage of 120 mg. Both forms are given before each meal and produce a moderate absolute and placebo-subtracted weight loss. While studies have demonstrated unexpected benefits associated with orlistat therapy, other studies have reported toxicity such as nephrotoxicity, hepatotoxicity and gastrointestinal side effects. It is important to consider the toxicity profile of the drug while prescribing orlistat, particularly in geriatrics, renal and liver disease patients. Overall, undesirable adverse effects coupled with only a modest average weight loss have decreased the utility and popularity of this particular medication.

Lorcaserin is a serotonin type 2C receptor agonist with hypophagic effects. Lorcaserin was approved by the FDA in 2012 as an adjunct to a reduced-calorie diet and increased physi­cal activity for chronic weight management in adults. The recommended dose is 10mg twice daily. The most common adverse events associated with lorcaserin included blurred vision, dizziness, somnolence, headache, gastrointestinal disturbance and nausea. In patients with cardiovascular disease, where sympathomimetics should be avoided, lorcaserin might have been a good option.

Lorcaserin has subsequently been taken off the market due to increased cancer risk.

Naltrexone blocks opioid receptor-mediated POMC auto-inhibition, and bupropion selectively inhibits reup­take of dopamine and noradrenaline. Monotherapy of these two drugs has also been used to treat addiction to nicotine (bupropion) and alcohol (naltrexone), and thus the combination has an effect on CNS reward pathways, food intake and satiety through antagonistic feedback inhibition. Bupropion monotherapy (300mg per day) in patients with obesity and depressive symptoms has also been shown to facilitate weight loss. During the initial drug-dosage titration stage, if a patient experiences significant nausea or other adverse effects, the dose should not be further escalated until the adverse effects have subsided or the patient has demonstrated better tolerability. Persistent or lingering adverse effects might warrant discontinuation of the drug. If no more than 5% of initial body weight is lost within 12 weeks, the drug should be discontinued. 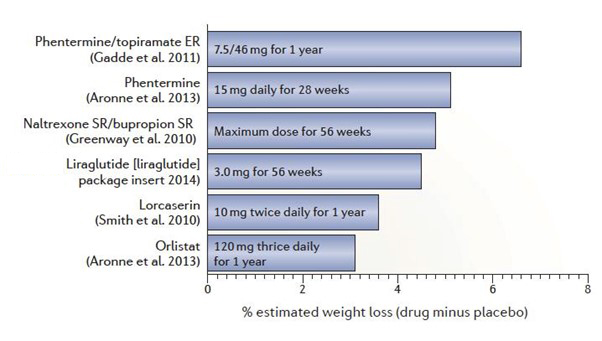 Liraglutide is a glucagon-like peptide 1 (GLP1) receptor agonist of an incretin-derived hormone that acts through both peripheral and central receptor pathways affecting glucose homeostasis, food intake and satiety. Because of its incretin properties, this compound is an attractive drug for patients with T2DM and obesity. Liraglutide is initiated at 0.6mg subcutaneously once daily for the first week; the dose is escalated by 0.6mg increments every week, up to a maximum of 3.0mg. If a patient experiences adverse effects such as nausea during dose escalation, dose increases should be aborted until better tolerability or cessation of adverse effects is achieved.

While all of the FDA-approved anti-obesity drugs are effective at weight reduction over time, some are clearly more effective than others, with phentermine and the extended-release formulation of phentermine/topiramate combination therapy ruling the roost in terms of efficacy. For the South African prescribing physician, this leaves phentermine monotherapy as the treatment of choice, since phentermine/topiramate is not available locally. Phentermine is an even more attractive option given that new studies by Lewis et al have cast doubt on the notion that long-term use results in cardiovascular adverse effects. Phentermine is available in two strengths in South Africa: 15mg and 30mg and is indicated in patients from the age of 12 years.