Melanoma is a malignant tumour that arises from the uncontrolled proliferation of melanocytes – pigment-producing cells. While the most common form of melanoma is cutaneous, it can also arise in mucosal surfaces, the uveal tract, and leptomeninges.4 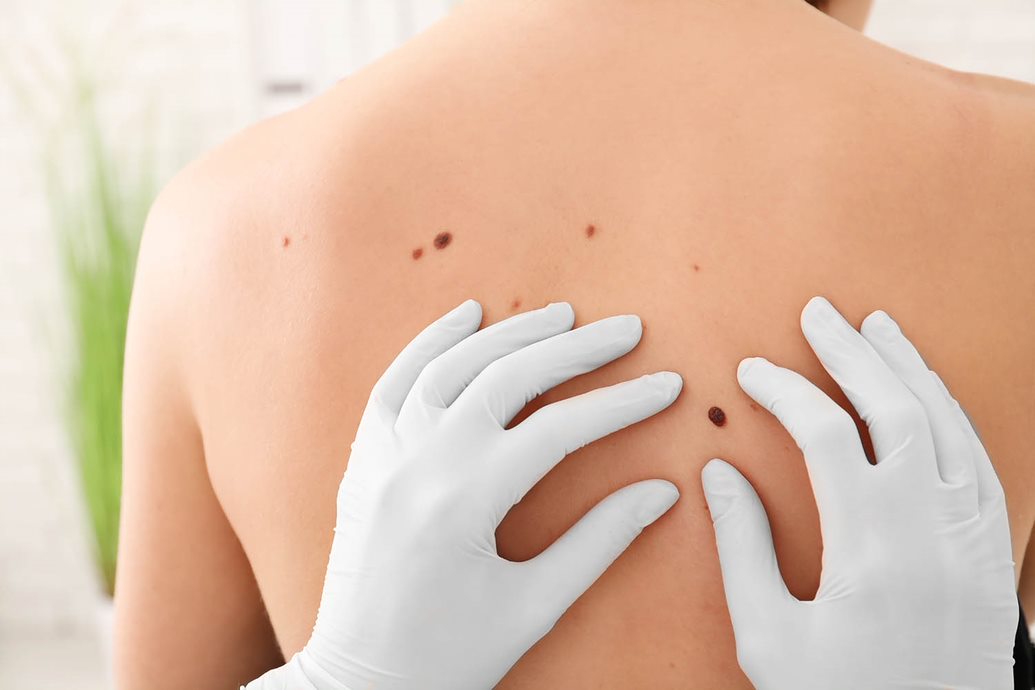 The worldwide incidence of melanoma has risen rapidly over the course of the last 50 years.

The majority of melanomas are diagnosed at an early stage, however, some patients present for medical care at a late stage when the disease has already metastasised. Melanomas are capable of metastasising to both regional and distant sites. The most common sites of regional metastasis are nearby skin, subcutaneous tissue, and lymph nodes.5

Metastasis to the skin may be the first external clue that lymphatic or hematogenous spread has occurred. The most common clinically apparent sites of distant metastases in melanoma patients are: skin, lung, brain, liver, bone, and intestine.5

The average age at diagnosis is 57 years, and up to 75% of patients are younger than 70 years of age. Melanoma is notorious for affecting young and middle-aged people, unlike other solid tumours, mainly affecting older adults. De Wet et al found that the mean age of the majority of patients diagnosed with melanoma in South Africa was 65 years.6,7

Symptoms and location of malignant melanoma

Melanomas can develop in or near a previously existing precursor lesion or in healthy-appearing skin. A malignant melanoma developing in healthy skin is said to arise de novo, without evidence of a precursor lesion.7

When metastatic, the presenting symptoms depend on the organ of involvement. The patient may present with a cough, dyspnoea, haemoptysis, jaundice, seizures, palpable subcutaneous masses.7

The ABCDE criteria are a useful diagnostic tool for identifying early melanoma lesions. The characteristics of melanoma are commonly known by the acronym ABCDE.8 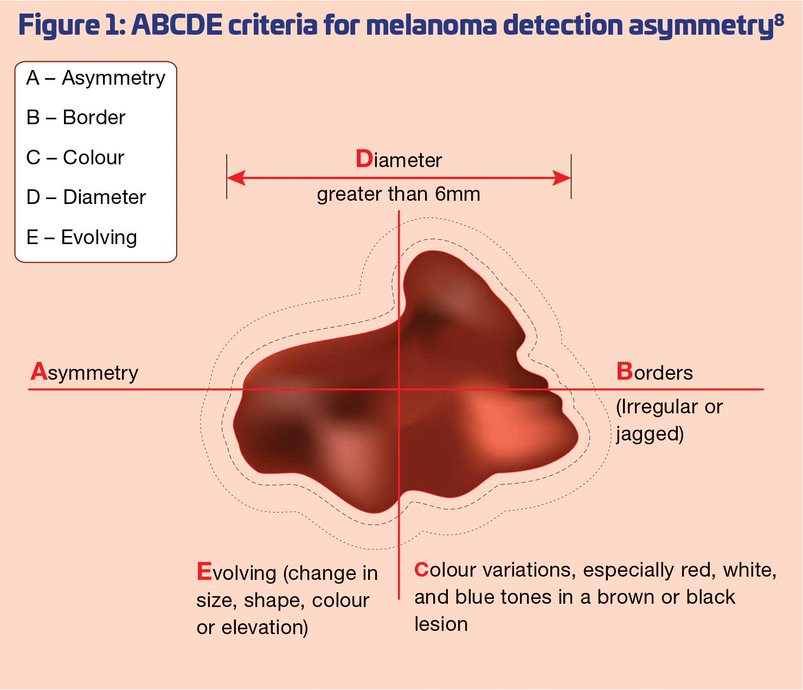 Melanoma has the highest rate of mutations of any cancer. In melanoma, BRAF mutation is most common in patients whose tumours arise on the skin without chronic sun-induced damage, whereas BRAF mutations are rare in melanomas arising from mucosal and acral sites.9,10

Among the BRAF mutations observed in melanoma, over 90% are at codon 600, and among these, over 90% are a single nucleotide mutation resulting in the substitution of glutamic acid for valine (BRAFV600E: nucleotide 1799 T >A, codon GTG > GAG).9,10

The American Joint Committee on Cancer (AJCC) melanoma staging now distinguishes four sub-stages. In the early stages, melanoma can be treated successfully with surgery alone and survival rates are high. However, with increasing Breslow thickness (see box 1), the risk of being diagnosed with stage III disease increases. According to the AJCC, the five- and 10-year survival rates for melanoma stage IIIA to IIID is 93% and 88%.9

According to Funck-Brentano et al, treatment of patients with metastatic melanoma has considerably improved over the past decade – especially for patients with AJCC stage III (loco-regional metastases) or IV (distant metastases) totally resected melanoma.11

Historically, chemotherapy was the only treatment option available for patients with advanced melanoma. Dacarbazine was the first single chemotherapy agent approved for the treatment of metastatic melanoma and is routinely used in clinical practice.10

However, only between 5%-20% of patients responded to treatment, and a six-year OS rate was achieved in less than 2% of patients. In 2013 the American Food and Drug Administration (FDA) approved the first MEK inhibitor (trametinib) for the treatment of melanoma.10,15

Rates of DMFS and freedom from relapse were also higher in the combination therapy group than in the placebo group. The safety profile of dabrafenib plus trametinib was consistent with that observed with the combination in patients with metastatic melanoma.11

Adjuvant use of combination therapy with dabrafenib plus trametinib resulted in a significantly lower risk of recurrence in patients with stage III melanoma with BRAF V600E or V600K mutations than the adjuvant use of placebo and was not associated with new toxic effects.11

On the basis of these results, the combination of dabrafenib plus trametinib has been approved by the FDA and the European Commission as adjuvant therapy for patients with completely resected BRAF V600E/K–mutant stage III melanoma.12

In 2018, Hauschild et al published an update on the COMBI-AD study which provided updated data on RFS and DMFS rates of patients in the study. Median patient follow-up was 44 months in the dabrafenib plus trametinib arm.12

Patients received 12 months of oral dabrafenib (at a dose of 150mg twice daily) plus trametinib (2mg once daily) or two matched placebos. The primary endpoint was RFS. OS was not analysed, since the required number of events to trigger the final OS analysis had not been reached.13

The percentage of patients who were alive without distant metastasis was 65% with dabrafenib plus trametinib and 54% with placebo. No clinically meaningful between-group difference in the incidence or severity of serious adverse events was reported during the follow-up period.13