The most common surgical operation performed on women globally is a caesarean section. This is defined as the use of surgery to deliver a child. The procedure is simple: an incision in the lower abdomen exposes the uterus, and a second incision in the uterus allows the child and placenta to be removed. When difficulties occur during or before labour that put the mother’s or foetus’ health at danger, a C-section may be performed. 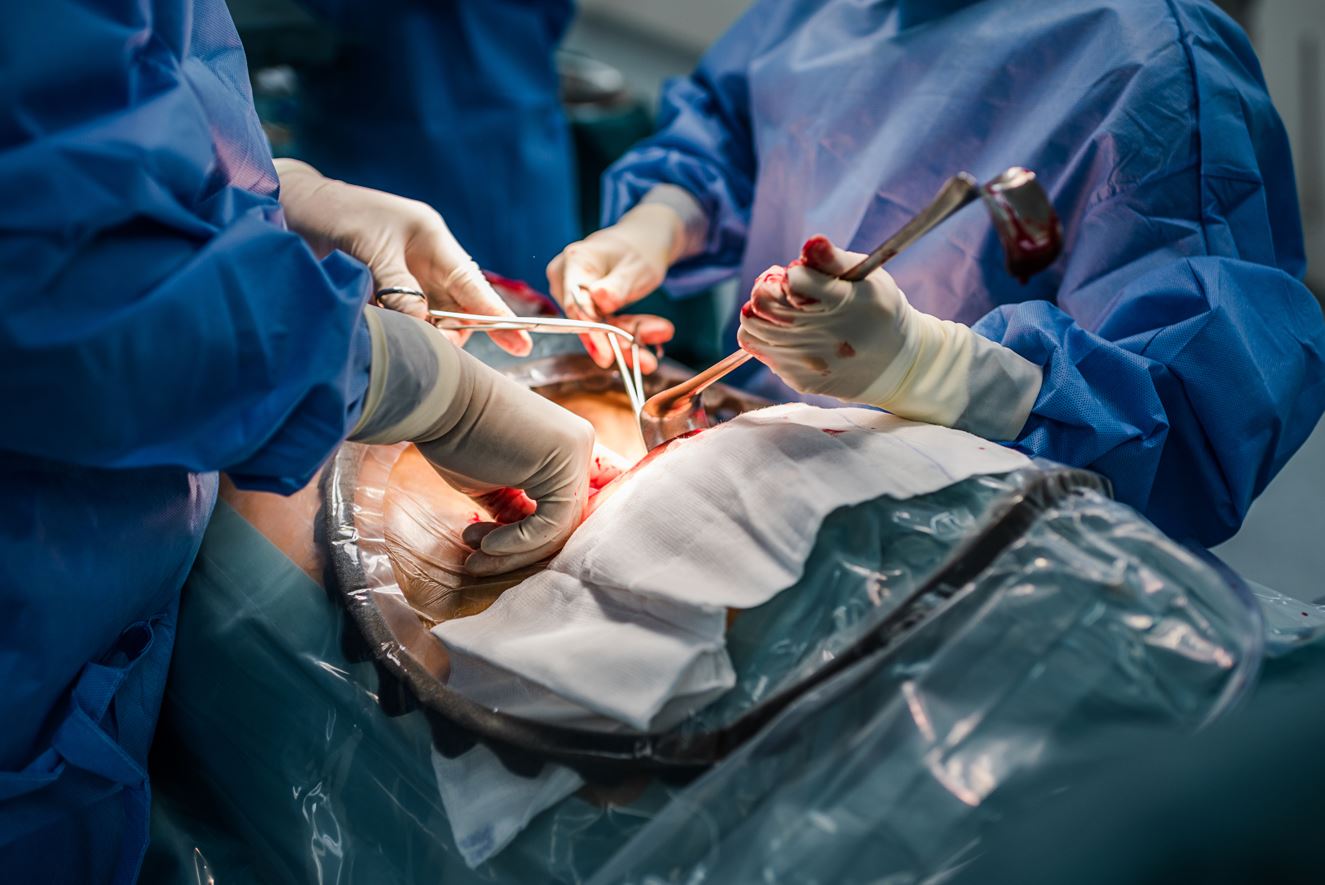 Despite a global decrease in SSI risk, the incidence of SSI is predicted to grow as the rate of caesarean births continues to rise [Image: Shutterstock].

The World Health Organization (WHO) recommends that caesarean sections be performed in no more than 10% to 15% of deliveries. However, fear of labour pains, along with concerns for the baby’s safety, are contributing to an increase in the number of women opting for a caesarean delivery. Despite massive worldwide efforts aimed at reducing the number of mothers and children dying because of problems during pregnancy and delivery, maternal mortality remains high, particularly in Sub-Saharan Africa.

Around 99 percent of the estimated 303 000 maternal fatalities that occur each year occur in developing nations, where access to prenatal care, family planning, postnatal care, and emergency obstetric services has been described as inadequate. In low-resource settings, the role of caesarean section is difficult to explain. C-section has been underutilized in many low- and middle-income nations, particularly among disadvantaged groups, and overused by the affluent group, with little thought given to ensuring broad access.

C-section is a major abdominal surgery that is frequently performed in critical situations such as foetal distress, haemorrhage, cephalopelvic disproportion, and eclampsia. Unfortunately, inexperienced and undertrained personnel are occasionally used to execute this surgery in low-resource settings.

IMPACT OF OBESITY ON DELIVERY

In 2008, for the first time in Homo sapiens‘ lengthy history, the number of fat individuals on the planet surpassed the number of people who suffer from hunger and famine in. Overweight individuals aged 18 and above currently account for more than 1.9 billion people worldwide. Obesity during pregnancy has been linked to both short- and long-term health consequences for both mothers and their kids, thus this high prevalence of obesity among women of reproductive age is a major public health concern.

Obesity in women before and throughout pregnancy raises the risk of morbidity and death in both the mother and the child. In addition, maternal obesity is linked to a higher chance of miscarriage. Obesity in the mother is linked to an increased risk of caesarean section and surgical site infection. Surgical site infection develops in around 10% of obese women who have a caesarean section, despite antibiotics and other preventative measures. This can be explained in part by reduced blood flow in adipose tissue and obesity-related inflammation, which leads to vascular dysfunction and a local hypoxic response. Hypoxia inhibits bacterial oxidative killing and increases the likelihood of surgical site infection.

In the last three decades, the risk of contracting SSI has reduced considerably, thanks to advancements in hygiene, antibiotic prophylaxis, sterile procedures, and other measures. Despite this decrease, the incidence of SSI is predicted to grow as the rate of caesarean births continues to rise. SSI after a caesarean delivery has been linked to an increase in maternal morbidity and death. Furthermore, SSI can be aggravating for the mother who is attempting to recuperate from the operation while also caring for the infant. It has the potential to lengthen maternal hospitalization, raise health-care expenditures, and have other socioeconomic consequences.

There are three types of risk factors for getting SSIs following a C-section: host-related factors, factors relating to pregnancy and intrapartum, and procedure-related factors.

In most trials comparing antibiotic doses, single-dose treatment was equally effective as multiple doses. A therapeutic level of cefazolin is maintained for 3–4 hours after a single 1 g intravenous dose. Obese women with a BMI of 30 kg/m2 or a weight of more over 100 kg may require a larger dose. Several recent trials comparing preoperative 2 g vs 3 g cefazolin in morbidly obese gravid women before caesarean delivery revealed no change in the rate of SSI or antibiotic concentration in adipose tissue between the two regimens.

A wound dressing is generally chosen based on the characteristics of the wound. In addition, a good wound dressing must have certain qualities such as the capacity to maintain a moist environment, absorb exudate, minimize maceration to the wound’s margins, allow for physiological gas exchanges, be simple to remove, and reduce discomfort from the wound. To avoid maceration, wounds with a lot of exudate need absorbent wound dressings with a lot of absorption capacity and quick dehydration.

Furthermore, wound dressings with adequate gas exchange between the outside and inside of the dressing, as well as an ideal water vapour transfer rate (WVTR), can maintain an optimal wound healing environment. Because a wound dressing clings to the skin, it can cause damage during removal, which can be unpleasant because nerve endings are exposed. As a result, good wound dressings should reduce wound discomfort and trauma.

Hydrocolloid dressings include absorptive compounds (usually plant-based materials like carboxymethylcellulose or pectin) that function as a barrier to water, oxygen, and germs while also creating an acidic environment beneath the dressing that has antibacterial characteristics. They’re said to be more pleasant and adhesive in high-friction regions, and they’re transparent, so you can see the wound directly. A 2016 study found that hydrocolloid decreased the risk of SSI when compared to simple wound contact dressings, but that no inferences could be taken because the data was of “extremely low” quality.

In the case of caesarean sections, a prospective UK study of 2382 women found a 1.3 percent absolute reduction in SSI rates with the use of hydrofibre and hydrocolloid dressings (following the introduction of a wound care package that lowered infection rates by 3.3 percent).

The efficacy of negative pressure wound treatment (NPWT) in the decrease of postsurgical wound problems in the obstetric population has been studied retrospectively in several studies. NPWT has multiple mechanisms of action that can help improve the speed, strength and quality of incisional wound healing. This can help minimise wound complications such as oedema, seroma, haematoma formation as well as dehiscence.

Incisional negative pressure wound therapy (iNPWT) has been proven to improve blood flow and minimize the incidence of surgical site infection after surgery. In addition, iNPWT decreases the likelihood of haematoma/seroma due to enhanced lymphatic drainage and wound dehiscence by reducing lateral and shear stress on sutures. However, as compared to conventional postoperative dressings, iNPWT is more costly.

In 2016, the World Health Organization guidelines for prevention of surgical site infection included a recommendation of prophylactic iNPWT in high-risk closed surgical incisions. Increased microvascular blood flow introduced by iNPWT may lead to a decreased hypoxia response and thus an improved oxidative bacterial killing mechanism in the adipose tissue, resulting in a lower risk of surgical site infection.

In a cost-effectiveness analysis to evaluate the cost-effectiveness of incisional negative pressure wound therapy (iNPWT) in preventing surgical site infection in obese women after caesarean section, data was used from a randomised controlled trial of 876 obese women who underwent elective or emergency caesarean section and were subsequently treated with iNPWT (n = 432) or a standard dressing (n = 444).

This cost-effectiveness was based on incremental cost per surgical site infection avoided and per quality-adjusted life-year (QALY) gained. The analysis found that incisional NPWT appears to be cost effective compared with standard dressings, although this finding was not statistically significant. The cost savings were primarily found in women with a pre-pregnancy BMI ≥35 kg/m2.

In a meta-analysis to assess the effect of prophylactic negative pressure wound therapy on surgical site infections and other wound complications in women after caesarean delivery, six randomized controlled trials and 3 cohort studies in high-risk mostly obese women were included. It was determined that the risk of surgical site infection was significantly lower with use of prophylactic negative pressure wound therapy compared with standard wound dressing. There was no evidence of significant statistical heterogeneity or publication bias. Of the secondary outcomes, only composite wound complications were significantly reduced in patients receiving prophylactic negative pressure wound therapy compared to standard dressing.