Differences in temperature and rainfall affect the pollination periods of plants and the growth of mould spores, which are common allergy triggers. Knowing what allergens dominate each season can help parents understand what may be causing their child’s allergic reaction and how to better prepare them for different times of the year. 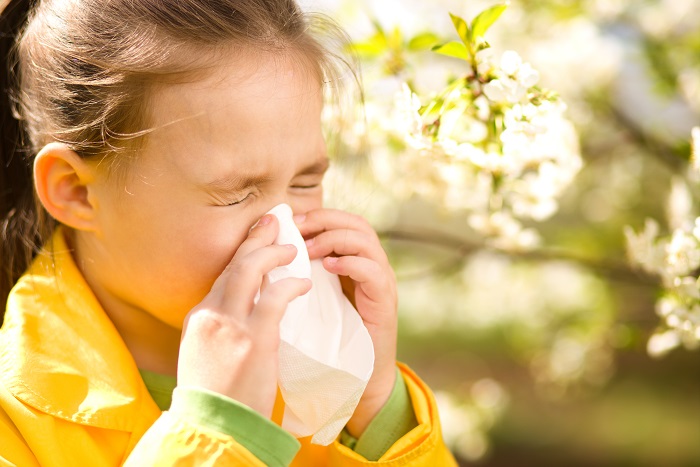 Knowing what allergens dominate each season can help parents understand what may be causing their child’s allergic reaction and how to better prepare them for different times of the year.

“One thing that is common to seasonal allergies is that particular pollens increase at particular times of the year, usually coinciding with season,” said Prof Claudia Gray allergist at the UCT Lung Institute and director of the Allergy Foundation of South Africa (AFSA).

SEASONAL GUIDE TO THE MOST COMMON ALLERGENS & TIPS TO AVOID THEM

Pollen counts are higher in spring if the winter was especially mild or wet. Certain days, however, are worse than others for allergy sufferers. “Warmer days tend to cause more pollination,” says Prof Mike Levin, CEO of AFSA and head of Allergology at Red Cross Children’s Hospital. “Windy days are problematic because pollen will get disseminated a lot more.”

“Pollen counts tend to be higher earlier in the morning, then settle during the day, and increase again around dusk,” Prof Gray advised. “Therefore there will be certain times of the day when children will be less affected than other times of the day.”

Grass pollens are by far the most abundant of pollens and a great problem for allergy sufferers in SA. Pollen levels peak in summer but – unlike elsewhere in the world – grass pollens are present almost all year especially in some parts of the country. “Different grass species flower at different times of the year, so that’s why you have these long grass seasons,” Prof Levin said.

Pollen problems don’t end when the kids get home from playing outdoors because particles cling to hair, skin, and clothing. “When you’ve been outside, it’s important to get rid of the pollen that you might be taking with you,” said Prof Gray, “Take off shoes that might be tracking pollen all over the carpet. Take a shower.” Prof Gray advised parents to protect their children from allergens just as they would from the sun – hats, sunglasses, long sleeves, and pants can reduce their exposure to pollen.

“Autumn season can be especially tough for children who are allergic to moulds,” said Dilys Berman SA pollen specialist. Rain can spell relief, since moisture in the air weighs down pollen and prevents it from becoming airborne. But rain also fosters the growth of mould spores, a common autumn allergen. Though outdoor mould typically appears in the summer as the temperature rises, “it often peaks in autumn after rain in March-April.” Berman said.

For anyone with seasonal allergies, winter can be the best time of year. Once temperatures are very low “the plants hibernate and that’s it,” said Prof Levin. “But that doesn’t mean allergies stop for the season. Reasons people continue to have symptoms during the winter include that the allergen that they are allergic to might be a perennial, year-round allergen, that the allergen might persist into the winter because of a long pollen season or even because the allergen is only present during winter.”

Winter won’t provide much relief for children who have non-seasonal or perennial allergies to things like dust mites, cockroaches, animal dander, and indoor moulds or mildews. In fact, these allergens “might cause more problems in the winter when people are indoors more and windows are closed,” Prof Gray advised. To reduce allergens in the home, AFSA suggests washing bedding every two weeks in water heated to at least 60 degrees, avoiding carpeting and upholstered furniture, and keeping pets out of certain rooms like children’s bedrooms.

While you can’t cure allergies there are several treatments to relieve symptoms. These include oral syrups and tablets, nasal sprays and washes, eye drops, and creams. As with all medications, it’s important to check the age from which the medications can be taken. Most eye drops for example are only recommended for children over three years old.

There are several choices of allergy eye drops depending on the symptom being treated – burning, itching, tearing, red eyes, and even swollen eyelids. These include antihistamine, anti-inflammatory (NSAIDs and corticosteroids), decongestant, mast cell stabiliser, and multiple action eye drops. Most eye drops are only recommended for children over three years old.

Skin allergies can cause red, itchy rash, hives, and even swelling deep in children’s skin. OTC hydrocortisone cream helps to reduce pain, itching, and swelling. Calamine lotion relieves itching, stinging, and burning, and can also help dry out oozing skin irritations as a result of scratching.