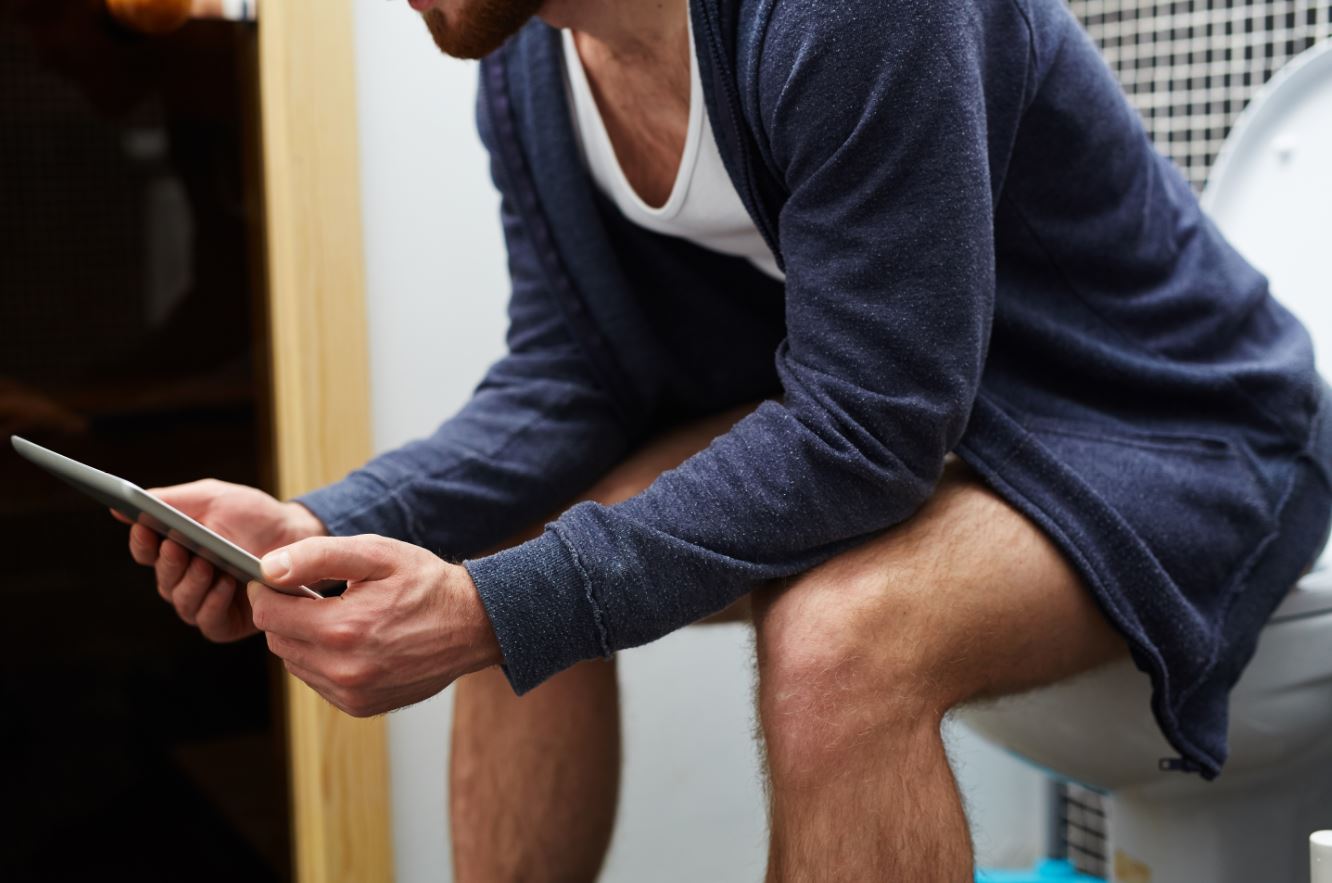 IBS is often described as a psychosomatic disorder [Image: Shutterstock].

Furthermore, studies show that 39.1% of patients with IBS have major depression and about 29% have anxiety disorders.1,2

* Note: Only one item required in children.

The Rome IV criteria define IBS as a functional bowel disorder in which recurrent abdominal pain is associated with defecation or a change in bowel habits. Disordered bowel habits are typically present (eg constipation, diarrhoea or a mix of constipation and diarrhoea), as are symptoms of abdominal bloating/distension. Symptom onset should occur at least six months prior to diagnosis and symptoms should be present during the last three months.4

Recurrent abdominal pain on average at least one day/week in the last three months, associated with two or more of the following criteria:

IBS is subtyped according to the predominant symptoms into:

The aetiology of IBS is unclear.  Studies have proposed that it might be caused by the disturbance of function along the brain-gut axis. However, to date, no specific biological abnormality has been identified that could explain the symptoms with specific exceptions such as post-infectious IBS.5

A biopsychosocial disease model in IBS

In 1977, American internist and psychiatrist, Dr George Engel, formulated the so-called biopsychosocial disease model. He believed that in order to understand and respond adequately to patients’ suffering and to give them a sense of being understood, clinicians must take the biological, psychological, and social dimensions of illness into consideration.9

Genetic factors that have been implicated in IBS include serotonin transporter, IL-1017 and other genetic polymorphisms.

Emotions and behaviour are often dictated by personality traits. The majority of studies supports the idea that IBS patients have higher levels of neuroticism (tendency to experience negative emotions, such as anger, anxiety or depression) compared to the general population, and patients with similar GI complaints.7

A lot of patients with IBS believe that their chronic gut symptoms indicate a serious illness or even cancer. In addition, patients describe IBS not only as symptoms but mainly as it affects daily function, thoughts, feelings and behaviours.7

Parental attitudes may also be important to the development or clinical expression of IBS. Levy et al indicated that children of patients with IBS had significantly more healthcare visits than those without IBS.6,8

Long-term or chronic stress can lead to long-term anxiety. The latter is the most common comorbid psychiatric disorder in IBS patients. A study found that environmental factors that played a role in the onset of IBS at an early age (15 years) include:6,7

Childhood trauma (eg witnessing a murder, death or illness of a parent) has also been associated with an increased vulnerability for multiple somatic symptoms of which IBS. Therefore, noted Surdea-Blaga et al, childhood deprivation may have an important influence on the etiology of IBS.7

The role of physical and sexual abuse in IBS is unclear, but evidence has shown that is does lead to increased psychological distress. Most probably, as a consequence, abuse is associated with greater impairment of functioning in daily lives, more visits to the doctor and a poorer health outcome.7

The severity of abdominal pain was found to be higher in patients exposed to emotional stress. Stress exacerbated abdominal distension in up to 33% of IBS patients. In addition, data showed that environmental factors and psychosocial stressors (for example history of being psychologically abused, less than six hours of sleep and irregular diet) influenced the progression from an IBS non-consulter to an IBS patient.7

Obtaining a detailed history with a few additional questions is warranted to confirm the suspected diagnosis of IBS. It is important to start by ruling out any warning signs. These include:13

o   Age over 50 without prior colon cancer screening; the presence of overt GI bleeding

o   Presence of a palpable abdominal mass or lymphadenopathy.

If these warning signs are absent, further history should be obtained to quantify the frequency of symptoms and determine whether the patient meets the Rome IV diagnostic criteria.

More specifically, the patient should be asked if his/her pain is present at least one day a week on average for the last three months. The rationale behind the latter two questions is to ensure that the symptoms are recent, and that there is no organic disease manifesting itself over at least six months.

The final component to applying the criteria involves associating the abdominal pain to bowel habits. A careful history should be obtained to confirm whether abdominal pain is related to defecation, a change in stool frequency, or a change in the appearance of stool. In order to clarify the latter characteristic, the Bristol stool chart should be employed as previously described.

Because of the interaction between physiological and psychological factors, the management of IBS is complex. Most guidelines recommend pharmacotherapy and non-pharmacotherapy interventions.  The latter include psychotherapy (eg cognitive behavioural therapy) and lifestyle interventions (dietary and complementary and alternative interventions).

There is no cure for IBS. As a symptom-based disorder, treatment goals are aimed at resolving symptoms such as pain, bloating, cramping, and diarrhoea or constipation.

The 2019 American Gastroenterological Association (AGA) recommends the following agents, which have been shown to be effective in the management of specific symptoms:11

Pharmacotherapy for IBS and anxiety

Combination therapy of anti-anxiety and smooth muscle relaxants may be useful. If patients’ symptoms are leading to limiting activities of daily living, low dose tricyclics (eg amitriptyline at doses from 10mg-25mg at night) may be considered.  If the patient experiences significant anxiety or underlying mood disorders, selective serotonin reuptake inhibitors (SSRIs) (eg escitalopram 10mg-20mg) may also be needed, according to Barrow.12

The efficacy of a number of psychotherapy (eg cognitive behavioural therapy, dynamic psychotherapy, hypnotherapy. biofeedback, and relaxation therapy) has been investigated in patients with IBS.13

Psychotherapeutic interventions should be reserved for severe forms of IBS that show high incidence of a comorbid psychological disorder or if a known comorbidity with a depressive or anxiety disorder exists, according to guidelines of the National Institute for Health and Care Excellence, British Society of Gastroenterology and the AGA.13

A 2005 meta-analysis showed that there is a 25% chance that a patient will benefit from any type of psychotherapy, while hypnotherapy and stress management had a higher rate of success with 52% and 67%, respectively.

Lifestyle and diet interventions sometimes are considered before pharmacological treatment. Lack of exercise, food deficiencies, lack or excess of dietary fibre intake, and lack of suitable times for defecation could contribute to the development of IBS, specifically constipation-predominant IBS. An increase in dietary fibres and regular exercise might benefit constipated IBS patients.13

Excessive caffeine consumption, indigestible carbohydrates and high lactose intake have been found to contribute to diarrhoea-predominant IBS. A stepwise food exclusion approach might be effective if the symptoms are mild to moderate.

A meta-analysis has demonstrated significant benefit of the low fermentable oligosaccharides, disaccharides, monosaccharides, and polyols or FODSMAP diet in improving functional GI symptoms in IBS patients.

Probiotics showed modest improvements for bloating, abdominal pain and bowel movement difficulties. No specific probiotic strain was found to be superior to another.

According to the World Gastroenterology Organisation Global Guidelines for IBS, complementary and alternative therapies (CAM) are increasingly being used by patients with IBS.13

A Cochrane review of herbal medicines for the treatment of IBS identified several well-designed clinical studies that showed improvement of IBS symptoms. One study employing a variety of Chinese herbal medicines, given alone or in a fixed combination, showed significant improvement of various IBS symptoms over a placebo treatment that extended beyond the end of the study.

Other alternative treatments frequently used by patients suffering from IBS are peppermint oil and acupuncture. A Cochrane review found that the effects of acupuncture on IBS symptoms were variable and did not differ significantly from the sham acupuncture treatment or any other interventions. This may be due to inconsistencies in study designs and possible inclusion of patients who were not thoroughly diagnosed with IBS prior to treatment.

IBS is the most common functional GI disorder with worldwide a prevalence rate of about 10%.  IBS is commonly associated with anxiety and depression and in some patients, onset can be traced back to stress or trauma. Diagnosis is complicated as a result of the lack of consistent biological markers, the non-specificity of the cardinal symptoms of abdominal pain or discomfort, as well as the heterogeneity of patients. Rome IV recommends a biopsychological approach to diagnosis. Clinicians involved in the management of IBS patients should consider psychological factors when initiating a management plan. Management includes pharmacotherapy and non-pharmacotherapy interventions.