Scarring is often perceived by the media and the general public to be horribly disfiguring and disabling. However, over the past few decades, advances in burn care have not only led to greater survival among those who sustain large burns, but in the majority of cases, to excellent functional and aesthetic outcomes. 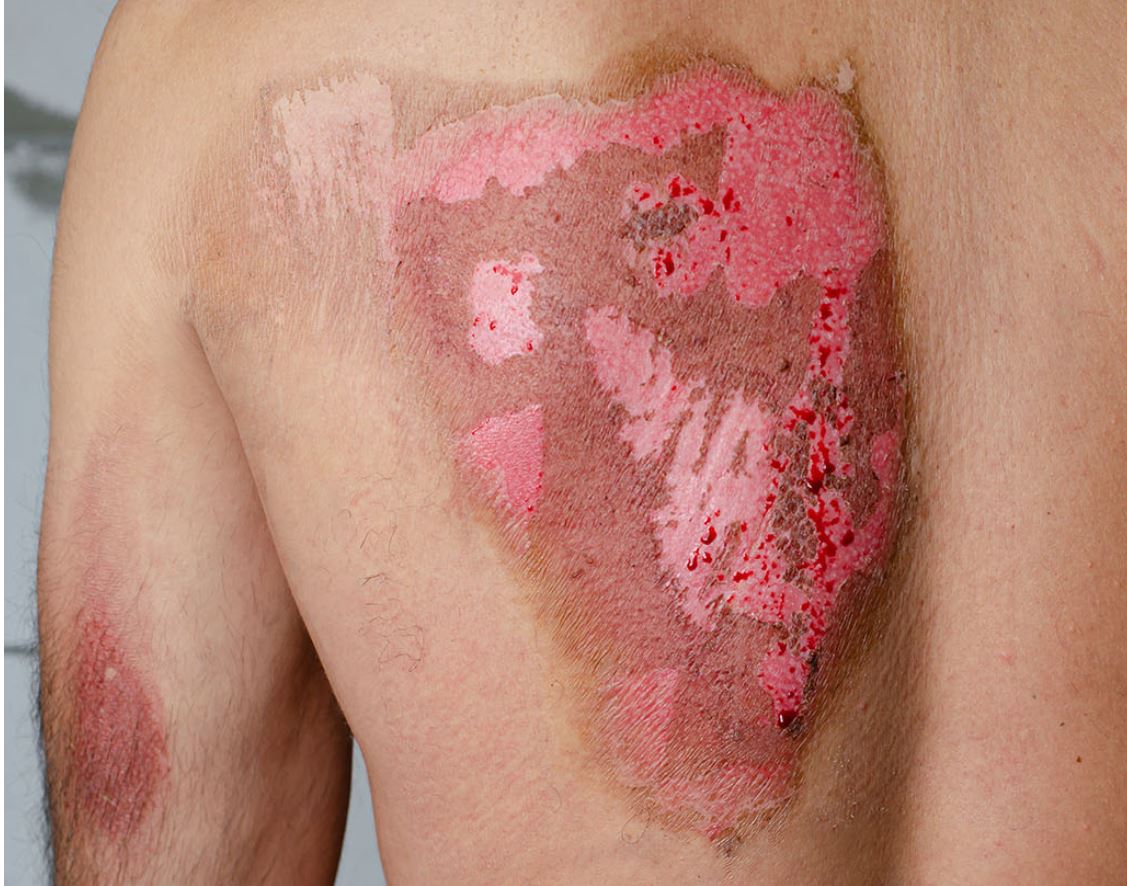 Over the past few decades, advances in burn care have not only led to greater survival among those who sustain large burns, but in the majority of cases, to excellent functional and aesthetic outcomes.

Unfortunately, in some instances, poor outcomes are inevitable. These include for examples injuries caused by high-voltage-driven electrical current conduction, or house fires.

In the former, injuries may result in major limb amputations, which markedly diminish outcomes. In the latter, a large proportion of the total body surface area (TBSA) is affected, especially when clothing catches on fire.

Scarring, a natural response to injury

The scarring process is part of the wound healing response, which always starts with inflammation, followed by proliferation, and remodelling. It is important to keep in mind that scars can take up to 24 months to mature.

Scar modulation can be effective and should persist in some form throughout this period. In addition to optimal surgical management, effective scar modulation measures, which include reducing tension across the scar, the provision of taping, hydration, and ultraviolet protection of early scar tissue, can improve outcomes.

Functional and aesthetic outcomes depend on the depth, size, and the area where the burn occurs. These three aspects will determine the timing and approach to management.

The majority of burn injuries are superficial enough and heal spontaneously, quickly and with excellent outcomes. Superficial burns are classified as:

These injuries are deep, resulting in prolonged healing (granulation tissue formation and wound contraction). While partial thickness burns can heal spontaneously with minimal scarring, deep partial thickness and full thickness burns require more than three weeks to close and are often associated with significant scarring and functional limitations, unless excised and grafted within the first few days.

These burns are more complex to treat because of recurrent wound infection and have a negatively impact on patients’ functionality. Scars are referred to as hypertrophic and dysaesthaetic (abnormal sensation), often causing itching and pain.

The treatment priorities in these burns are to:

The second most important step to consider is the size or surface area of the burn injury. This is estimated as a percentage of the %TBSA.

A small area of full-thickness burn (localised to the affected area) can be treated with early excision and immediate skin grafting. Donor site for the skin graft should be taken from a non-cosmetic area. Early scar therapy can begin once the graft has taken and is robust.

More than 50% of burn injuries involve the head and neck areas.  Deep second and third-degree burns in this region often result in hypertrophic scar formation. These injuries require immediate or early reconstruction.

If reconstruction requires grafting, the best functional and cosmetic outcomes are generated by thicker, unmeshed (sheet) split skin grafts. In the patient with significant burns, this requires a large proportion of the available donor sites to cover relatively small surface area/s. Bigger areas are left un-grafted.

Reconstruction of the eyelids and lips is challenging. Small full-thickness grafts or flaps are often used. It is crucial during to identify areas capable of healing spontaneously, bearing in mind that the deeper adnexal structures in facial skin often allow even burns, which appear deep, to heal without intervention. The best course of action is often to allow the face to heal spontaneously as much as possible and then plan appropriate reconstruction for scarred areas.

The neck is prioritised for early grafting not only for function but also to allow for tracheostomy placement as severely burned patients may require prolonged intensive care and ventilation.

Full-thickness burns on the dorsal aspect of the hands are grafted to allow early mobilisation and return to function. Early intervention by occupational and physiotherapists will improve outcome.

The glabrous skin on the palm and areas of partial thickness burn are routinely allowed a ‘trial of life’ to allow preservation of this highly specialised skin.

When a graft is placed over a joint, in particular the elbow and knee, contracture reduce the range of movement. This contracture is less significant than if the burn had been left to heal by secondary intention.

Subsequent scar management requires intensive occupational therapy and physiotherapy to regain and maintain range of motion. Contractures are more likely to occur in the more severe burns, those caused by flame and those in children and females and burns affecting the neck skin (due to the presence of the platysma) and the upper limb.

Silicone sheeting, or gel, is universally considered the gold standard in prophylactic treatment for hypertrophic or keloid scars. The efficacy and safety of this approach have been demonstrated in numerous studies.

Hypertrophy is managed by aggressive scar modulation, which include the use of  pressure garments, silicone therapy and moisturising and massage.

Moisturising and massage are often described as ‘softening’ scars, most likely due to the reorientation of collagen fibres. An ideal moisturiser should be one that is conducive to scar maturation, is non- or minimally irritant, prevents skin drying, minimises trans-epidermal water loss and has no negative effect on barrier function.

The symptomatic manifestations of suboptimal scarring are difficult to manage, particularly pain and itch. Itch is challenging as the symptoms are subjective and the treatment is multimodal with no ‘magic bullet’ to prevent or ameliorate it.

Pain control and analgesia is vitally important – particularly during dressing changes. Pain control should be managed by experts. Pain control is also essential for effective rehabilitation.