According to projections by the US Centers for Disease Control (CDC), there will be more deaths from antimicrobial-resistant bacteria than from all types of cancers combined by the year 2050. The problem of antibiotic resistance is such that the Organisation for Economic Co-operation and Development (OECD) projects the death of over 2.4 million people in Europe, North America and Australia from infections with resistant microorganisms in the next 30 years, at a healthcare cost of up to $3.5 billion (R61 billion) per year. 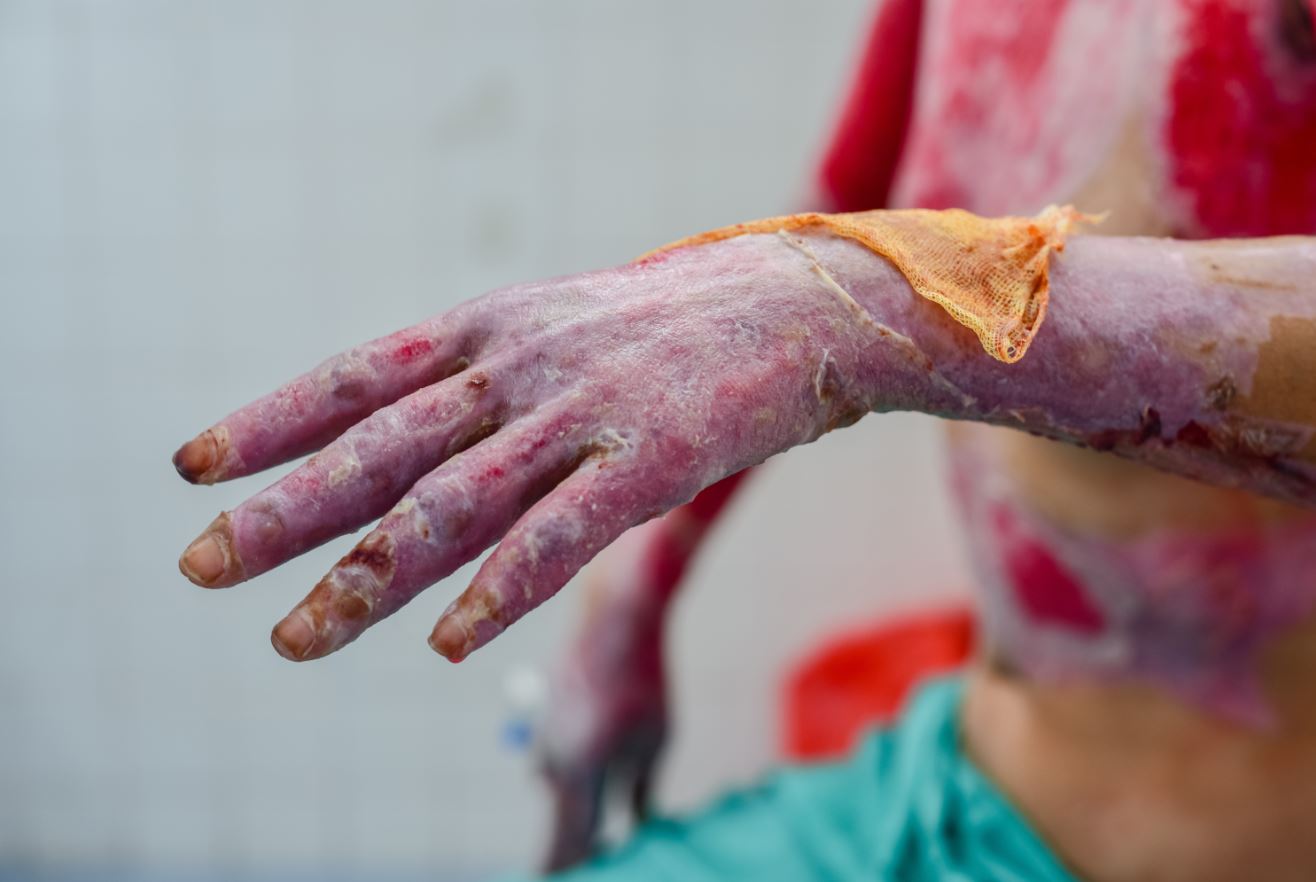 Nanocrystalline silver wound dressings are a potent first-line choice to help curb the danger of resistant bacteria and infection in the wound bed [Image: Shutterstock].

The medical profession has known about the grave threat of antimicrobial resistance for a few decades but little has been done to stem the threat, as evidenced by a study of Europe’s burden of resistant infections during 2015, which concluded that 39% of all resistant infections were caused by bacteria that are resistant to last-line antibiotics, making them very difficult or impossible to treat. Furthermore, the study found that the burden of European resistant infections is comparable to that of influenza, tuberculosis and HIV/AIDS combined and is highest in infants and the elderly.

In many countries in Asia, Africa, and Latin America, antibiotics are readily available from local pharmacies, hospitals, drugstores, roadside stalls, and hawkers without a prescription. In rural Bangladesh, a study of 2000 participants showed that 95% of the medications consumed came from local pharmacies, and only 8% of these were prescribed by physicians. The South African situation is similar, with a high burden of infectious diseases consisting of a significant population that are of bacterial origin.

In South Africa, a prominent increase in extended-spectrum beta-lactamase (ESBL) production and emergence of carbapenemase production in Klebsiella pneumoniae and Enterobacter spp., multidrug resistance and an increase of carbapenemase production in Acinetobacter baumannii and Pseudomonas aeruginosa, an increase in multidrug-resistant Escherichia coli and resistance in Gram-positive isolates with a decline in methicillin-resistant Staphylococcus aureus (MRSA) and a steady increase in vancomycin-resistant enterococci (VRE) have been noted in various reports.

It has in recent years become abundantly clear that reducing antibiotic consumption alone will be insufficient to control antimicrobial resistance as the spread of resistant bacteria and of resistance genes also play a dominant role in the problem. It is therefore up to the frontline clinicians to not only focus on reducing their reliance on antimicrobial agents when prescribing, but also to actively pursue methodologies that will counter resistant bacteria.

Burns and thermal injuries are physically and psychologically destructive and potentially fatal. They are some of the most important medical emergencies and are one of the major causes of fatality and disability worldwide. The rate of infection depends on the extent of the burn injury, general wound care and various host factors such as nutritional status, age, immune status, and comorbidity conditions.

Bacterial contamination of burn wounds is responsible for a very high rate of morbidity and mortality globally, with resistant bacteria causing a growing number of these fatal episodes. To address this health issue, different labs around the world have developed antimicrobial wound dressings to prevent wound contamination. The wound dressings developed up to now have been produced with different materials (synthetic or natural) and with various physical forms, with distinct properties that make them suitable for the treatment of a particular wound type.

To improve dressing antimicrobial properties different agents have been incorporated within their structure. Those antimicrobial agents comprise essentially antibiotics (such as tetracycline, ciprofloxacin, gentamicin and sulfadiazine), silver nanoparticles and natural products, including honey, essential oils and chitosan. Antibiotics incorporated into wound dressings can interfere with a function/feature of bacterial structure or on their metabolic pathways through one of the following mechanisms:

Despite several antibiotics being available to treat skin infections, their recurrent use can trigger bacterial resistance and various studies report that an improper use of antibiotics leads to the development of new resistance mechanisms by bacteria, thus causing their global dissemination. More than 70% of the bacteria that are responsible for wound infections display resistance to at least one of the antibiotics commonly used in burn wound dressings.

According to a study performed on 470 samples of wound secretions with bacteriological identification, S. aureus and P. aeruginosa strains were both significantly resilient to antibiotics application. In addition, infectious strains are starting to acquire resistance to almost all classes of antibiotic, leading to an imperative need for finding new healing substitutes.

Nanoparticles are regarded as promising alternatives to conventional antibiotics, since they display bactericidal activity against a large number of strains and are able to minimise the undesirable side effects of drugs and do not trigger microbial resistance. Due to the intrinsic properties displayed by NPs, they have been used in different therapeutic approaches that aim to circumvent the problems associated with the acquisition of resistance to antibiotics by bacteria.

Silver is known to have a broad spectrum of activity against bacteria, yeasts and fungi and has been used in modern day wound healing since the early 1960s when 0.5% silver nitrate aqueous solution was used as an alternative to antibiotics in the management of major burns. However, rapid inactivation by protein and chloride in the burn wound meant application frequencies could be up to 12 times per day to ensure that sufficient levels of silver ions were available to reduce the bacterial load.

Silver sulphadiazine (SSD) was introduced in the late 1960s, and this combination of silver linked to a sulphadiazine carrier reduced the frequency of application to once/twice daily as the effective release and replenishment of bactericidal levels of ionic silver were considerably improved. Alternatively, the use of silver compounds has been evaluated in multiple studies and considerable positive impacts of this element in the prevention of burn site infection have been reported. Ionised silver dressings have different benefits as compared to creams containing silver sulfadiazine, including slow releasing, further-half-life, less frequent dressing change and thus less pain during replacement, and low rate of wound infection.

Silver has both intracellular and extracellular antimicrobial effects, but the exact mechanisms have not been fully elucidated. The main property of silver that confers antibacterial activity appears to be its ability to bind weak bases such as sulphur and phosphate, disrupting intramolecular disulphide bonds within proteins, which are often crucial for their stability, secondary structure formation and activity.

The use of silver nanoparticle-loaded dressings has now become commonplace for the prevention of infection in burn patients and those with open wounds. The smaller the particles of silver, the greater the wound surface area that will be in contact with silver, thus increasing bioactivity and silver solubility. Research has demonstrated that sustained-release silver products have a bactericidal action providing effective management of odour and exudate, thus reducing the risk of colonisation and preventing infection.

In a study which examined the in vitro fungicidal efficacy of a variety of topical agents, fungal isolates were inoculated onto mafenide acetate, silver nitrate, silver sulfadiazine cream and nanocrystalline silver dressings, then incubated, and the fungi survival rate was evaluated. All the antimicrobial dressings were found to be effective against fungi. Unsurprisingly, the nanocrystalline dressing provided the fastest kill rate and the broadest spectrum activity against fungi.

Multiple studies have demonstrated that sustained-release silver products have a bactericidal action providing effective management of odour and exudate, thus reducing the risk for colonization, and preventing infection. The action is accomplished by the silver ions binding to tissue proteins causing a structural change in the bacterial cell membranes.

The silver then binds and denaturises the bacterial DNA and RNA, thus inhibiting replication. Nanocrystalline silver dressings have been found to be less painful than SSD cream dressings, and also, compared with SSD cream, reduces burn wound cellulitis. Research has revealed that nanocrystalline silver has an anti-inflammatory effect through metalloproteinases, allowing optimal epithelialization. SSD cream, on the other hand, has been found to have pro-inflammatory properties and shown to cause leucopaenia.

A recent study on chronic wounds colonised with MRSA showed that the application of a nanocrystalline silver dressing reduced transfer of this organism in 95% cases. Seven patients with a total of 10 MRSA colonised wounds were sampled for MRSA at each dressing change (after 1, 24, 48, and 72 h). Swabs were taken from the upper side of the dressing and the wound bed. None of the dressings showed heavy MRSA load breakthrough on the upper side over the 72-hour observation period.

Furthermore, no bacterial penetration through the dressing was shown in seven wounds. Of the remaining three wounds, two dressings had a MRSA colonisation, and one wound had minor colonisation of the upper side. Nanocrystalline silver dressings were found to provide a complete, or almost complete, barrier to the penetration/spread of MRSA in 95% of readings. In addition, 67% of all wound observations showed a decrease in the MRSA load with an eradication rate of 11%.

A retrospective analysis of infection prevention and treatment in hospitalised burn patients before and after the introduction of a new burn wound management strategy to reduce the use of systemic antibiotics and increase the use of topical antimicrobial products (silver-containing dressings and antiseptics), focused on assessment reports of 2000 patients (mean age 45.7 years) with an 18.4% mean body surface area affected by burn who were treated between 2014 and 2016 at a single centre in Poland. A sharp increase in antibiotic-resistant isolates at this burn centre in Poland, most likely due to extensive antibiotic use in 2014, necessitated a new strategy for prevention and treatment of infections using topical antimicrobials.

A burn wound management strategy incorporating topical antiseptic cleansers and nanocrystalline silver dressings can be cost effective and help to optimise the treatment of infections and decrease the use of antibiotics therefore helping to reduce the development of drug resistance in P. aeruginosa.

There is an abundance of quality evidence demonstrating the efficacy of nanocrystalline silver, even when measured against such standard treatments for burn wound care such as SSD cream. The demonstrable effect of nanocrystalline silver against such problematic resistant bacteria such as MRSA and P. aeruginosa proves its efficacy as a first-line antibacterial therapy which does not cause further antimicrobial resistance.