Malnutrition in the ICU patient can be the result of acute and chronic illness, trauma, and inflammation, which induce stress‐related catabolism, thus increasing the metabolic rate at which the body breaks down food. In addition to this, drug‐related side-effects may affect ingestion, leading appetite loss, nausea or vomiting.  Critically ill people, who may be unconscious, unable to feed themselves or unable to receive oral nutritional support, or both, are at increased susceptibility to malnutrition. 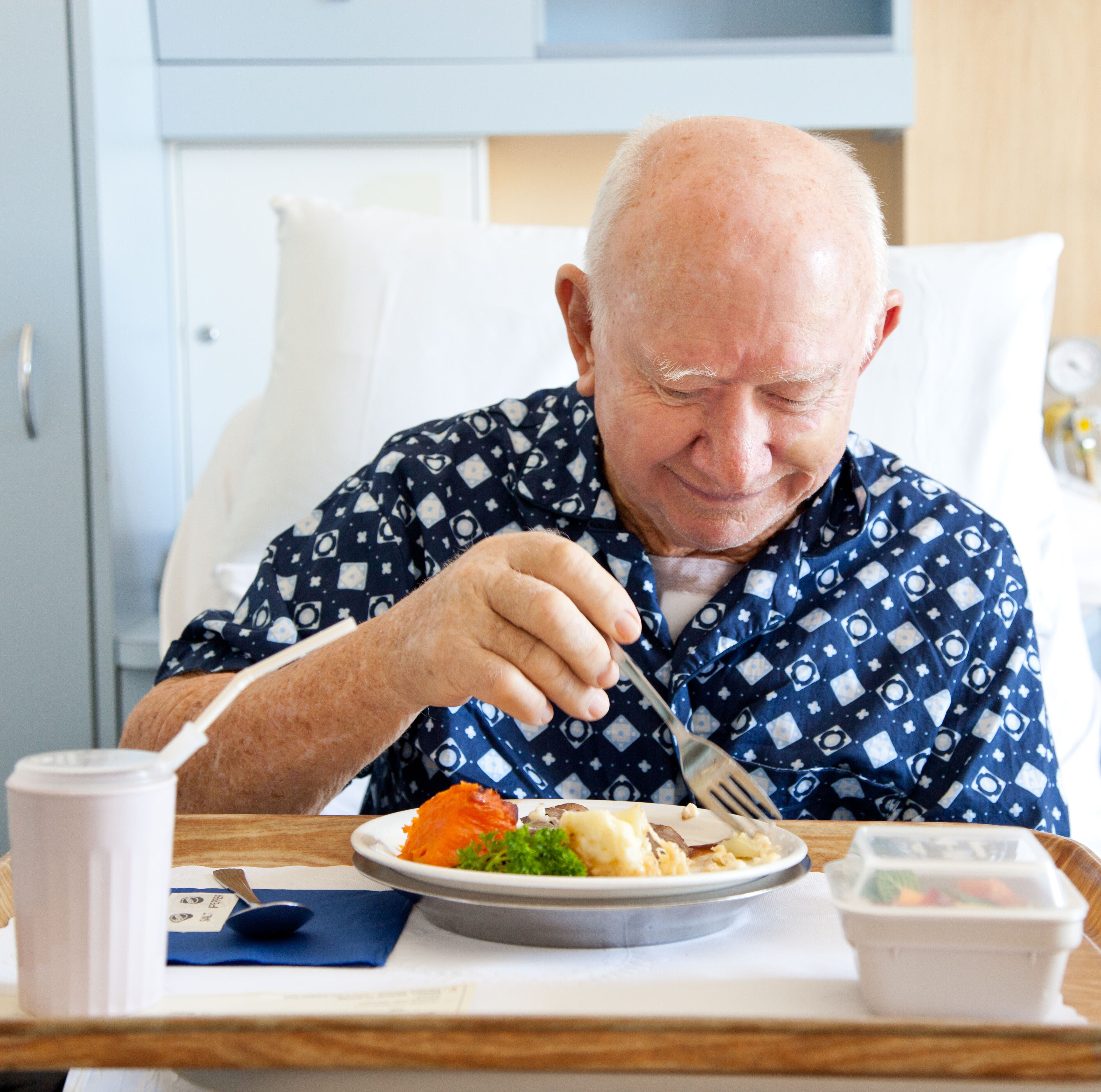 Identifying patients with malnutrition early in the ICU admission is key to preventing poor long-term outcomes.

In addition, studies have shown that there is a lack of knowledge and awareness amongst healthcare professionals about the importance of nutritional care as part of the ICU patient’s road to recovery.

Current guidelines recommended starting eternal nutrition (EN) early in ICU admittance, followed by paternal nutrition (PN) if goals are not met with the former. EN is the delivery of a nutritionally complete feed via a tube into the stomach, duodenum, or jejunum. This method is suitable for people who have inadequate oral intake but a functional gastrointestinal tract, and some evidence suggests that it is an effective method of providing nutrition to particular patient groups e.g. those with sepsis or acute pancreatitis).

EN may help to maintain the function and integrity of the gut barrier, and is associated with increased immunoglobulin A production, which in turn may provide increased protection against airway infections.

However, critically ill people may not tolerate enteral feeding well, and side-effects such as nausea and vomiting may occur, and non‐occlusive bowel necrosis. In addition, high volumes of gastric residual may allow bacteria to colonize, and increase the risk of aspiration and complications, such as ventilator‐associated pneumonia, although one study assessing monitoring of gastric residual volume showed no difference in ventilator‐associated pneumonia with absence of monitoring.

Furthermore, EN can be disturbed by patient care and diagnostic interventions, particularly among people receiving respiratory support, and this may affect the capacity for EN to maintain nutritional goals. Some benefit has been found from placing the tube into the duodenum or jejunum rather than the stomach.

PN is unphysiological and bypasses the gastrointestinal (GI) tract and portal venous system. It delivers a nutritionally complete feed intravenously (IV) via a central or peripheral venous catheter and may be used as an alternative for people in need of nutritional support. It confers the advantage of ease of administration to the person, often with no further intervention needed to provide nutritional support when all components are administered via an ‘all in one bag’ system.

Whilst interrupting feeding during patient care is not necessary, PN may increase the risk of overfeeding. PN is associated with a higher rate of hyperglycaemia, subsequently, people may require glycaemic control alongside PN. Earlier studies have reported increased susceptibility to infectious complications, such as catheter‐related bloodstream infections.

The American Society for Parenteral and Enteral Nutrition (ASPEN) introduced a nutrition bundle in its updated 2016 guidelines for the assessment and implementation of nutrition support in critically ill patients. The guidelines recommend use of EN over PN.

According to the ASPEN’s guidelines, nutrition therapy has three main objectives:

Basic principles of nutrition therapy should be maintained when the nutrition bundle is implemented. The first step in determining nutrition for a critically ill patient is to determine the patient’s energy requirements in the form of calories.

ASPEN guidelines suggest indirect calorimetry as the gold standard to estimate energy needs, but this method is not always available in all ICUs. If indirect calorimetry is not available, an evidence-based predictive equation, such as the Modified Penn State Equation, or the simple value of 25kcal/kg to 30kcal/kg per day can be used to estimate energy needs to help healthcare providers determine nutritional adequacy.

The guideline emphasises adequate protein delivery to critically ill adults. Protein is the most important nutrient to support wound healing and immune function and to maintain lean body mass. A weight-based equation can be used to determine the appropriate daily amount of protein. The value of 1.2g/kg to 2g/kg per day is appropriate for estimating protein needs for most critical care patients.

A thorough nutrition assessment, including a physical examination, is important, because serum markers of protein consumption are inadequate and inaccurate in the critical care setting. Any history of nutrition-related problems, gastrointestinal disease, alcohol or drug abuse, or elevated metabolic rate should be considered to determine appropriate protein and caloric needs.

The nutrition bundle takes these concepts and incorporates strategies for nutrient delivery to provide the basis for the assessment and provision of appropriate nutrients to improve patients’ outcomes.

For the list of guideline recommendations, go to www.medicalacademic.co.za.

The 2018 European Society for Parental and Enteral Nutrition guideline recommends:

1. Every critically ill patient staying for more than 48 h in the ICU should be considered at risk for malnutrition.

3. Oral diet shall be preferred over EN or PN in critically ill patients who are able to eat

4. If oral intake is not possible, early EN (within 48 h) in critically ill adult patients should be performed/initiated rather than delaying EN

5. If oral intake is not possible, early EN (within 48 h) shall be performed/initiated in critically ill adult patients rather than early PN

6. In case of contraindications to oral and EN, PN should be implemented within three to seven days

7. Early and progressive PN can be provided instead of no nutrition in case of contraindications for EN in severely malnourished patients

8. To avoid overfeeding, early full EN and PN shall not be used in critically ill patients but shall be prescribed within three to seven days

9. Continuous rather than bolus EN should be used

10. Gastric access should be used as the standard approach to initiate EN

11. In patients with gastric feeding intolerance not solved with prokinetic agents, post-pyloric feeding should be used.

12. In patients deemed to be at high risk for aspiration, post-pyloric, mainly jejunal feeding can be performed.

15. If calorimetry is not available, using VO2 (oxygen consumption) from pulmonary arterial catheter or VCO2 (carbon dioxide production) derived from the ventilator will give a better evaluation on EE than predictive equations.

17. Hypocaloric nutrition (not exceeding 70% of EE) should be administered in the early phase of acute illness

20. In patients who do not tolerate full dose EN during the first week in the ICU, the safety and benefits of initiating PN should be weighed on a case-by-case basis.

21. PN should not be started until all strategies to maximise EN tolerance have been attempted

22. During critical illness, 1.3 g/kg protein equivalents per day can be delivered progressively.

23. The amount of glucose (PN) or carbohydrates (EN) administered to ICU patients should not exceed 5mg/kg/min. Recommendation 24 The administration of intravenous lipid emulsions should be generally a part of PN.

24. IV lipid (including non-nutritional lipid sources) should not exceed 1.5g lipids/kg/day and should be adapted to individual tolerance.

27. In ICU patients except burn and trauma patients, additional enteral GLN should not be administered.

28. In unstable and complex ICU patients, particularly in those suffering from liver and renal failure, parenteral GLN-dipeptide shall not be administered.

29. High doses of omega-3-enriched EN formula should not be given by bolus administration.

30. EN enriched with omega-3 FA within nutritional doses can be administered.

31. High doses omega-3 enriched enteral formulas should not be given on a routine basis.

33. To enable substrate metabolism, micronutrients (eg trace elements and vitamins) should be provided daily with PN.

34. Antioxidants as high dose monotherapy should not be administered without proven deficiency.

36. In critically ill patients with measured low plasma levels (25-hydroxy-vitamin D < 12.5ng/ml, or 50nmol/l) a high dose of vitamin D3 (500 000 UI) as a single dose can be administered within a week after admission.

38. Low dose EN should be administered in patients:

39. Early EN should be performed in patients:

40. In non-intubated patients not reaching the energy target with an oral diet, oral nutritional supplements should be considered first and then EN.

41. In non-intubated patients with dysphagia, texture-adapted food can be considered. If swallowing is proven unsafe, EN should be administered

42. In non-intubated patients with dysphagia and a very high aspiration risk, post-pyloric EN or, if not possible, temporary PN during swallowing training with removed nasoenteral tube can be performed.

44. In patients after abdominal or oesophageal surgery, early EN can be preferred over delayed EN.

45. In critically ill patients with surgical complications after abdominal or oesophageal surgery and unable to eat orally, EN (rather than PN) should be preferred unless discontinuity or obstruction of GI tract, or abdominal compartment syndrome is present.

46. In the case of an unrepaired anastomotic leak, internal or external fistula, a feeding access distal to the defect should be aimed for to administer EN.

47. In the case of an unrepaired anastomotic leak, internal or external fistula, or if distal feeding access is not achieved, EN should be withheld and PN may be commenced.

48. In case of high output stoma or fistula, the appropriateness of chyme reinfusion or enteroclysis should be evaluated and performed if adequate.

51. In obese patients, energy intake should be guided by indirect calorimetry.

53. Blood glucose should be measured initially (after ICU admission or after artificial nutrition initiation) and at least every four hours, for the first two days in general.

54. Insulin shall be administered, when glucose levels exceed 10mmol/L.

55. Electrolytes (potassium, magnesium, phosphate) should be measured at least once daily for the first week.

56. In patients with refeeding hypophosphatemia (<0.65mmol/l or a drop of >0.16mmol/l), electrolytes should be measured two to three times a day and supplemented if needed.

57. In patients with refeeding hypophosphatemia energy supply should be restricted for 48 hours and then gradually increased.

Combining EN and PN: What does the evidence show?

Because it is cheaper, safer, and more physiologic, EN remains the preferred choice, according to Shi et al. However, EN alone usually is not able to meet the energy targets owing to GI intolerance, which can lead to malnutrition.

PN has been shown to address this issue, but it also increases the risk of infectious complications and mortality had been reported in many current guidelines. This has led to the much-debated question about whether there are benefits of combining these approaches. Two recent large-scale reviews looked the benefits and risks of doing just that.

The review by Shi et al explored the overall effects of nutrition support. The researchers compared combination PN and EN with EN alone in adult critically ill patients, while a Cochrane review by Lewis et al looked specifically at the route of delivery that will optimise uptake of nutrition.

Their results also show that combination of PN and EN has an ‘encouraging’ trend on reducing mortality and duration of ventilatory support, increases protein delivery and decreases malnutrition.

They concluded that one feeding regimen rather than another may make little or no difference to mortality in hospital or within 30, 90 or 180 days.

Lewis SR, Schofield-Robinson OJ, Alderson P and Smith AF. Delivery of nutrition (food) to critically ill adults other than by the person eating and swallowing the food/nutrition. Cochrane Review, 2018.