Ocular allergy affects up to 40% of the general population and has become increasingly prevalent in the last four decades. The symptoms include intense itching, photophobia (discomfort of light) and lacrimation (secretion of tears). Such symptoms affect daily leisure and work activities of adults and children and, consequently, overall wellbeing and quality of life. The most common clinical form of ocular allergy is conjunctivitis (inflammation of the conjunctiva), which is usually associated with allergic rhinitis. 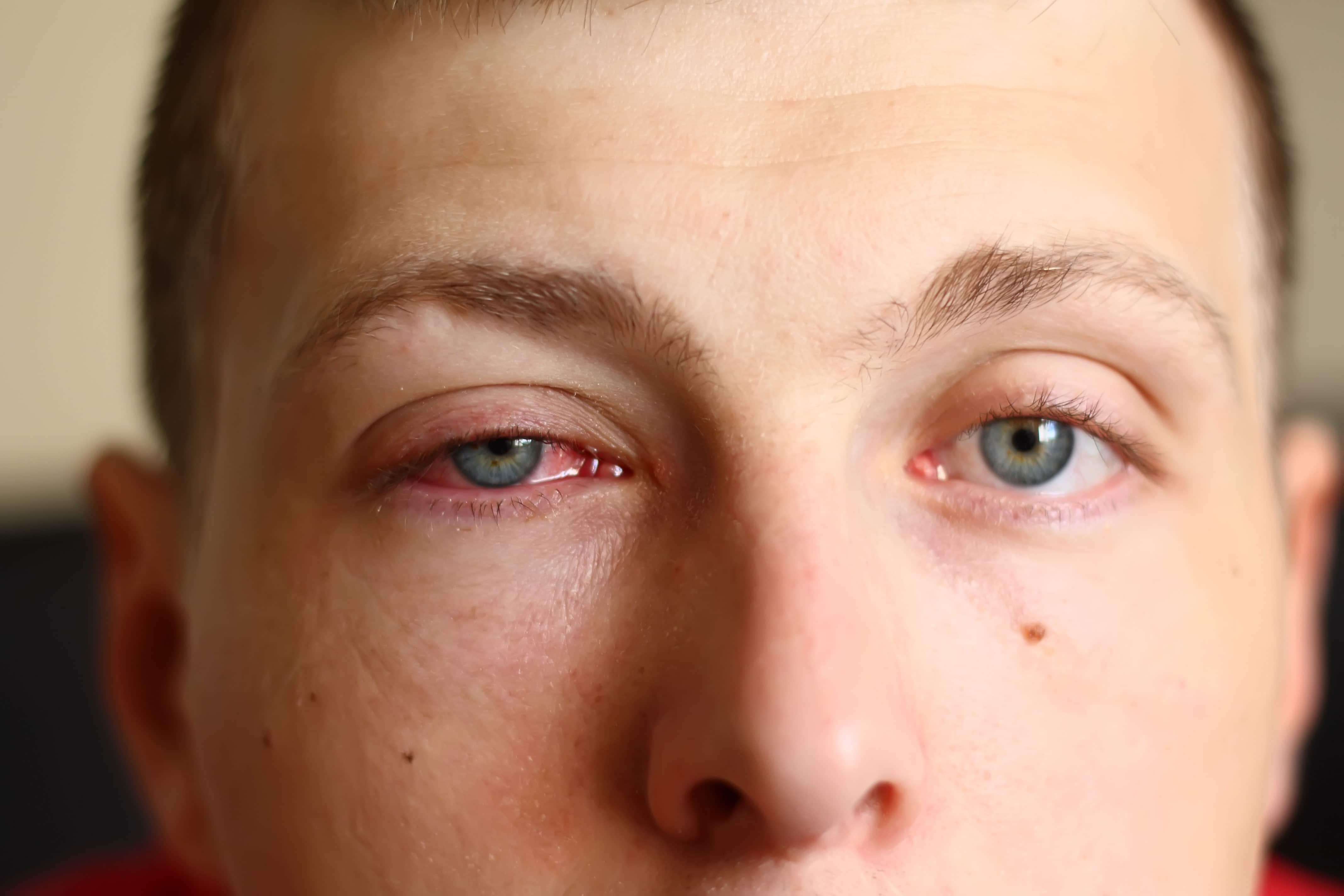 SAC-related symptoms occur following a cascade of inflammatory responses when a sensitised individual is exposed to an allergen. This allergic cascade includes the release of a number of preformed and newly synthesised inflammatory mediators.

Allergic conjunctivitis is classified as seasonal (SAC), perennial (PAC), atopic (AKC) and vernal (VKC). SAC is the most common form of eye allergy and is characterised by acute unilateral or bilateral itching, tearing and conjunctival hyperaemia (increased blood in the eyes) during the pollination periods of the year. SAC occurs in previously sensitised individuals when exposed to aeroallergens, such as grass and ragweed pollens.

It is estimated that about six million South Africans suffer from allergies to pollen. Pollen profiles may be typical of Mediterranean, subtropical, savannah, grassland, semi-desert and arid regions, many of which are characteristic of South Africa’s biodiversity in climatic conditions. Furthermore, South Africa is home to 957 of the known grass species worldwide. People living in the Highveld of South Africa are particularly prone to this condition. Seasons also affect sufferers considerably, with spring often being a particularly difficult time. This is due to the increased amount of pollen being released by trees, grass and flowers.

Practitioners should elicit a personal history of allergies and atopy, as well as a history of similar episodes in the past. Practitioners should ask about specific symptoms from the current and any past episodes. Itchiness and diffuse bulbar and tarsal conjunctival injection are the most commonly reported symptoms and are present in all subtypes of allergic conjunctivitis. As a result of the discomfort from ocular symptoms, patients with ocular allergies may limit or completely restrict daily activities including reading, computer use and going outside.

In response to re-exposure to a specific antigen, the sensitised mast cells found in abundance in the conjunctiva degranulate and release histamine and other inflammatory chemical mediators. This process promotes vasodilation, oedema, and recruitment of eosinophils, which further stimulates and propagates the allergic response. Patients suffer classic symptoms of itching, eyelid swelling, burning, stinging, conjunctival hyperaemia, chemosis, and mucoid or watery discharge. Attacks are usually short-lived and episodic but can be longer and often recur frequently depending on the allergen and the patient’s susceptibility to it.

Simple allergic conjunctivitis (acute, seasonal and perennial) is an immunoglobulin E (IgE) mediated hypersensitivity reaction (type I) and resultant mast cell degranulation secondary to direct contact with an allergen to the ocular surface. As such, there is an immediate and delayed phase of the reaction mediated by different inflammatory modulators. Allergic conjunctivitis frequently accompanies seasonal allergy symptoms, specifically known allergy exposures or a history of atopy. As such, recurrent episodes are commonly seen.

It can be a challenge to accurately diagnose and manage this condition – a sentiment that is shared by specialist ophthalmologists. Allergic conjunctivitis is therefore often underdiagnosed and consequently undertreated. Diagnosis is made clinically with a thorough history and classic physical examination findings. If there is any concern based on the history and physical examination, fluorescein staining of the cornea can be used to ensure that there is no corneal abrasion. Laboratory testing is generally not needed, although skin prick or serum allergy testing can be helpful for mitigating the disease process by identifying the offending allergens so that they can be avoided if possible.

Signs and symptoms associated with SAC include redness, periocular itching (pruritus), tearing (epiphora), burning, stinging, photophobia, watery discharge and swollen or dry eyes in differing degrees of severity with variable duration. Of these, redness and itching are the most consistent symptoms of allergic conjunctivitis. The pathognomonic symptom is itching, without which the ocular condition is likely not ocular allergy.

SAC-related symptoms occur following a cascade of inflammatory responses when a sensitised individual is exposed to an allergen. This allergic cascade includes the release of a number of preformed and newly synthesised inflammatory mediators, such as histamine, leukotrienes and prostaglandins, as well as activation and recruitment of inflammatory cells to the site of allergen exposure.

Neutrophils and macrophages recognise antigens by cell surface receptors that are specific for allergen structures or patterns. Toll-like receptors (TLRs) are a family of innate immune receptors that enable the host immune system to recognize and respond to antigens by triggering the earliest immune responses that lead to inflammation. The presence of proinflammatory mediators, prostaglandins and leukotrienes in the tear fluid is associated with the itching, redness, watering and mucous discharge that occur with SAC.

Allergic conjunctivitis is characterised by the infiltration of inflammatory cells into the conjunctiva in approximately 25–43% of patients with SAC. This infiltration of inflammatory cells into the conjunctiva occurs because of release of inflammatory mediators such as tumour necrosis factor alpha (TNFa), which up-regulates adhesion molecules such as intercellular adhesion molecule (ICAM)-1. Similarly, the cytokine IL-4 plays a key role in continued inflammation during the late phase of the ocular allergic response through the promotion of T-cell growth, induction of IgE production from B cells, upregulation of adhesion molecules and regulation of T-helper type 2 (Th2) cell differentiation.

Topical decongestants reduce some signs and symptoms of SAC through vasoconstriction via a-adrenoreceptor stimulation. There is some amelioration of ocular itching associated with the use of topical decongestants. The discontinuation of these agents following prolonged use can lead to rebound hyperaemia (‘conjunctivitis medicamentosa’). To minimise this potential side-effect, exposure to topical decongestants should be limited through less frequent dosing or shorter treatment durations.

Antihistamines act via histamine receptor antagonism to block the inflammatory effects of endogenous histamine and to prevent or relieve the signs and symptoms of SAC that are associated with histamine. In addition, some topical antihistamines may have general anti-inflammatory effects that occur because of the prevention of the late phase of the allergic response. The use of systemic antihistamines may potentially lead to side-effects, including sedation, ocular drying and cardiotoxicity. As a result, systemic antihistamines are not usually recommended for the treatment of SAC unless it is accompanied by other rhinoconjunctivitis symptoms.

As a result of this required long regular dosing before exposure to seasonal allergens, patient compliance may decrease. Topical mast cell stabilisers have minimal ocular side-effects, although there may be some tolerability concerns, because transient burning or stinging may occur upon application.

By inhibiting upstream phospholipase A2, they block both the cyclooxygenase and lipoxygenase pathways of the inflammatory cascade and thus prevent formation of all eicosanoids. corticosteroids reduce synthesis of histamine, stabilise cell membranes, and inhibit degranulation of mast cells, making topical corticosteroids an effective treatment for ocular allergic inflammatory conditions.

However, safety remains a concern for clinicians, particularly with long-term use. Though highly effective at suppressing inflammatory and allergic responses, topical ophthalmic corticosteroids carry an inherent risk of side effects, including elevated intraocular pressure (IOP), a risk factor for the development of glaucoma. The corticosteroid loteprednol etabonate (LE) contains an ester rather than a ketone at the C-20 position, minimising the potential for side effects, including IOP elevation.

Multiple studies evaluating the safety and efficacy of LE for inflammatory conditions have been reported, including those requiring longer-term treatment such as photorefractive keratectomy, corneal transplantation, and dry eye disease. LE is unique among corticosteroids in that the drug molecule incorporates a metabolically labile moiety which allows rapid metabolism and degradation following glucocorticoid receptor activation, thereby imparting a lower risk of side effects.

LE also retains the high potency of prednisolone, with an anti-inflammatory efficacy 20-fold higher than hydrocortisone. These attributes enable LE to penetrate the ocular tissues including the conjunctiva, cornea, and iris-ciliary body, bind to the glucocorticoid receptor, and exert potent anti-inflammatory effects, with minimal propensity for side effects.

Evidence from published data indicates that topical treatment with LE has minimal effect on IOP when used in the treatment of a wide range of ocular surface and intraocular inflammatory disorders, including ocular allergy, DED, anterior uveitis, penetrating keratoplasty, endothelial keratoplasty, and postoperative pain and inflammation following ocular surgery. In all studies, LE consistently demonstrated a low propensity to elevate IOP, regardless of formulation, dosage regimen, or treatment duration, including in known steroid responders.

The topical C-20 ester corticosteroid has consistently demonstrated a low propensity to increase IOP even in known steroid responders. This improved safety profile makes LE therapy an advantageous treatment option for ocular inflammation, especially in cases where chronic use of a topical corticosteroid is necessary but limited by a higher risk for ocular hypertension.

Only a small fraction of systemically administered drugs will distribute to the eye from the general circulation, and an even smaller fraction thereof will cross the blood-retinal barrier to reach the eye. Thus, topical administration of corticosteroids is the preferred route for anterior segment inflammatory conditions as it maximises drug delivery to the anterior segment and minimises systemic exposure. Topical administration also helps avoid systemic ADRs such as hypothalamic-pituitary-adrenal (HPA-axis) suppression.

The process begins with identifying a metabolite of the reference compound that has no apparent pharmacologic activity and structurally modifying that molecule into an isosteric/isoelectronic analogue. Thus, drugs can be purposefully designed to have a lower risk for AEs, while retaining a potency that is comparable to the reference compound.

The most promising drug candidate among cortienic acid-based derivatives synthesized by Bodor and colleagues was LE. LE is highly lipophilic—its lipophilicity is 10 times greater than that of dexamethasone, a characteristic that may increase its efficacy by enhancing penetration through biological membranes. A vasoconstriction test in humans used to assess bioavailability showed that LE produced a blanching response similar to that of betamethasone 17α-valerate, thereby confirming good penetration properties and strong potency. But more importantly, initial studies by Bodor showed that the therapeutic index of LE was more than 20- fold better than that of other corticosteroids including hydrocortisone 17α-butyrate, betamethasone 17α-valerate, and clobetasone 17α-proprionate based on the cotton pellet granuloma test and thymolysis potency.

Despite the high prevalence of ocular allergies such as seasonal allergic conjunctivitis, the available treatments are often limited in their effects and provide sub-optimal clinical outcomes. However, retrometabolic drug design principles have led to the development of LE, a C-20 ester corticosteroid. LE appears to achieve the necessary balance between solubility/lipophilicity, tissue distribution, GR receptor binding, and metabolic deactivation to be effective as a topical ophthalmic steroid. LE is effective in treating a wide variety of ocular inflammatory conditions including giant papillary conjunctivitis, seasonal allergic conjunctivitis. ADRs such as cataract formation and IOP elevation were minimised with LE owing to its retrometabolic design and their absence confirmed in clinical studies.