Basal cell carcinoma (BCC) is the most common cancer, accounting for nearly 75% of all skin cancers worldwide. Although it rarely results in death or metastatic disease, BCC can cause significant morbidity due to destructive local spread. Luckily, the accessibility of skin and the high prevalence of BCC have allowed a thorough characterisation of its pathogenesis, clinical presentation and histopathology and the course of BCC treatment is generally well understood. Rates of BCC have been reported to be increasing in many countries around the world as a result of the increasing longevity of the general population and sun exposure behaviours. 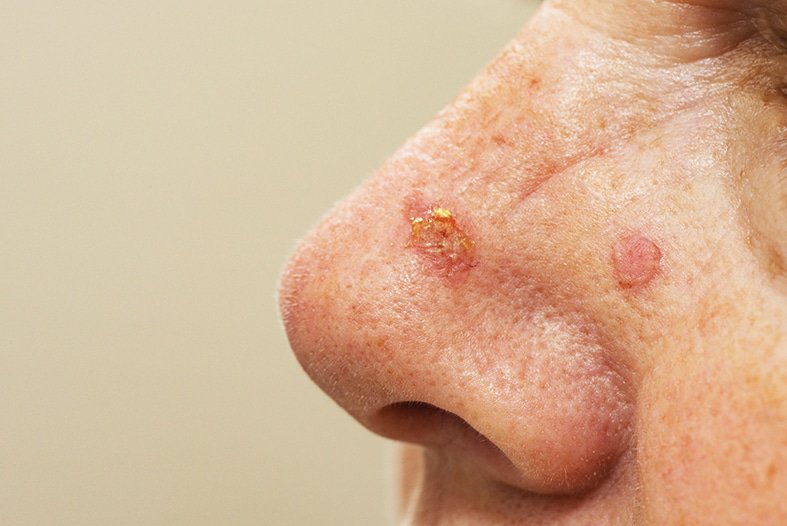 A similar affliction, the chronic skin condition actinic keratosis (AK), also known as solar keratosis, is characterised by the formation of keratotic lesions of variable thickness that are poorly delimited. These represent focal areas of abnormal keratinocyte proliferation and differentiation. AK occurs on areas of the skin that have had long‐term exposure to the sun or UV radiation, predominantly on skin of the head and dorsa of the hands, in fair‐skinned individuals. Although AKs may regress, they usually persist and can progress to squamous cell carcinoma (SCC). Most patients with AK can be diagnosed and managed in primary care.

AKs are generally considered to be premalignant lesions with low individual potential for invasive malignancy and potential for spontaneous regression. AKs present as discrete, sometimes confluent, patches of erythema and scaling on predominantly sun‐exposed skin, usually in middle‐aged and elderly individuals.

The disease progression of BCC is usually that of a slow-growing skin cancer starting from a tiny, hardly visible papule, growing usually for years without any aggressiveness into a nodule or a plaque, sometimes ulcerated, leaving time to be diagnosed and managed correctly. A few forms of common BCC, such as superficial, nodular, morphoeic and ulcerated, are clinically recognised.

More than 95% of BCCs are easy to treat through standard surgery or a range of alternative blind treatments at least during the initial months or years after diagnosis. Difficult-to-treat BCCs include all locally advanced BCCs and also common BCCs which, for any reason, pose specific management problems. These reasons may be:

All difficult-to-treat BCCs are at high risk of recurrence mainly because of difficulty in the management that often leads to compromise with regard to ideal treatment and recommended safety margins of excision. All BCCs managed by ablative procedures without histopathological control instead of surgical excision are at high risk of recurrence. It must however be mentioned that not all recurrences have the same implications. A recurrence of an invasive BCC on eyelids, nose, lips and ears significantly increases the risk of deleterious consequences, while a recurrence of a superficial BCC (sBCC) on the back will be easily managed.

In the case of AK, the presence of a single lesion is a marker of excessive sun exposure and is associated with the development of further lesions. Point‐prevalence studies demonstrate that lesions regress and relapse over time (especially in the case of so-called grade 1 and 2 lesions). Figures range wildly between 25% and 70% for apparent resolution of AKs over a period of one to four years. This is cause for concern since AKs could, in some circumstances, be seen as a precursor condition to SCC.

Most primary BCCs can be easily treated by surgery or by non-surgical methods for certain subtypes, but BCCs with a high risk of recurrence need to be treated more aggressively. Risk of recurrences increases with tumour size, poorly defined margins, aggressive histological subtype or previous recurrences.

Surgical removal by destructive (blind) treatments and non-surgical modalities including topical treatments or photodynamic therapy (PDT), either alone or combined, may be used for low-risk BCCs when surgery is contraindicated or impractical. Histological examination of damaged tissue is not possible using topical or destructive treatment techniques.

In terms of AK, the main patient‐centred considerations are the symptoms and cosmetic burden of the AK, the efficacy and burden of treatment, and the threat of evolution of the AK into a more bulky lesion or invasive SCC. Healthcare professional considerations overlap with these, but include others such as efficacy, a flexible regimen, availability in primary and secondary care and cost. An additional aspect of management is consideration of the patient’s overall risk of skin cancer and the wider skin examination.

In summary, data suggests the possibility of regression and a low risk of malignant progression for any given AK. The presence of AK (particularly in high‐risk patients with multiple AKs or field change) predicts an excess risk for subsequently developing melanoma compared with a matched population.

Given the variety of nonsurgical treatment options available, physicians must take into account numerous factors in order to determine which therapy, or combination of therapies, would best meet the goals of the patient.

As a general rule of thumb, nonsurgical modalities, such as topical creams and phototherapies, are superior to surgical therapies for non-advanced BCCs in cosmetically sensitive areas, albeit at the cost of higher recurrence rates and longer treatment times. Additionally, nonsurgical therapy is usually more effective for superficial BCCs than nodular BCCs. In cases of deep or infiltrating BCC, nonsurgical modalities should be used with caution and clinicians may want to consider a combination of therapies to minimise recurrence.

Imiquimod functions as an immuno-modulatory drug that stimulates both the innate and cell-mediated arms of the immune system while simultaneously exhibiting direct pro-apoptotic effects on tumour cells. It has also been shown to inhibit the Hedgehog signalling pathway whose activation is crucial for the development and propagation of BCCs.

A non-inferiority, randomised controlled trial (RCT) compared 5% 5-fluorouracil (5-FU) (twice daily for four weeks) with imiquimod 5% cream (once daily, five times a week for six weeks) and methyl aminolevulinate photodynamic therapy (MAL-PDT) (two sessions with an interval of one week) in patients with sBCC followed up for five years.

The overall estimate of treatment success at one year was 72.8% for MAL-PDT, 83.4% for imiquimod and 80.1% for 5% 5-FU, supporting that topical 5-FU was non-inferior and imiquimod was superior to MAL-PDT for treatment of sBCC. Tumour thickness and adnexal extension of sBCC appeared not to predict treatment failure. Five years after treatment, the probability of tumour-free survival was 70.0% for 5% 5-FU, 62.7% for MAL-PDT and 80.5% for imiquimod, confirming that 5% imiquimod is superior to both MAL-PDT and 5% 5-FU in the treatment of patients with primary sBCC. Imiquimod therefore represents a clinically useful alternative to surgery in the treatment of low-risk, single or multiple sBCC.

There is a risk of recurrence with both AK and sBCC. While surgical treatments are clinically optimal and with low recurrence rates, they leave much to be desired in terms of their cosmetic effect on a patient’s skin and are invasive. Non-surgical therapies are often a better choice, and among these imiquimod 5% cream has a demonstrably positive effect on short-term and long-term clearance rates. Imiquimod is considered as the first choice for non-invasive treatment in most primary sBCCs.

Stockfleth, E, 2017. The importance of treating the field in actinic keratosis. European Academy of Dermatology and Venereology. Volume 31, Issue 2, Pages 8-11.