Cough, an important physiological reflex that protects the airways from aspiration of foreign materials, is commonly divided into productive and non-productive types. Although fatal complications are rare, persistent coughing may cause considerable distress in a patient’s daily life. 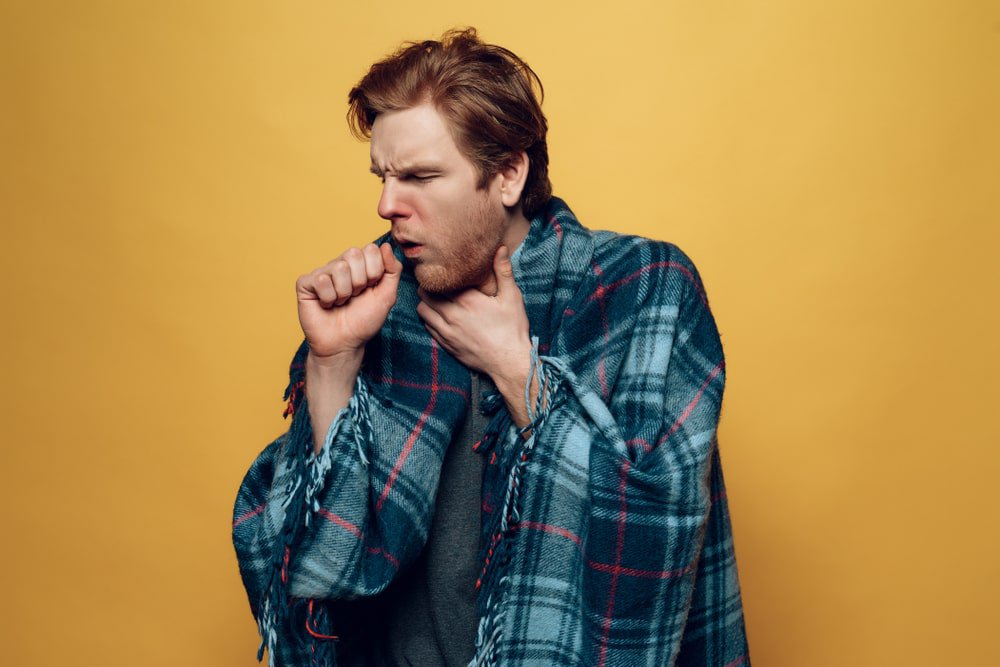 Diagnosing the cause of wet cough can be challenging and is generally dependent on clinical assessment and response to treatment, as there are few non-invasive diagnostic tests.

A cough is defined as productive when it produces mucous or some sort of fluid, including blood, and as non-productive when this is not the case. A productive or wet cough is produced by a bacterium or virus causing secretion in the lower airways, as is the case during bronchitis, asthma, flu, common cold, pneumonia and similarly respiratory conditions.

The unifying symptom of conditions that produce a wet cough is the production of excessive mucous and sputum. However, despite the adverse impact of productive cough, there is a paucity of guidance on its evaluation and treatment, and in the absence of fixed airway obstruction, it has been excluded from professional COPD guidelines. Generally speaking, the severity of productive cough can be graded based on the duration and presence of symptoms and airflow obstruction into groups of progressively greater impairment. Greater severity of productive cough is associated with greater wood smoke and cigarette smoke exposure, greater airway wall thickness, and lower plasma CC16 levels.

Diagnosing the cause of wet cough can be challenging and is generally dependent on clinical assessment and response to treatment as there are few non-invasive diagnostic tests. Generally speaking, a wet cough sounds soupy and may be accompanied by a wheezing or rattling sound and a sensation of tightness in the chest. Interestingly, multiple studies have found that there is an increased prevalence of cough among those of the female sex and those regularly exposed to environmental tobacco smoke, factors which are not often considered during a cough diagnosis.

Even though cough is such a common complaint, it is recommended that physicians examine each patient thoroughly, since the use of terms such as wet and dry by parents or patients is subjective and not a robust indicator of pathology. Since cough is a non-specific symptom indicating inflammation of the airways, it cannot be used as a sole determinant to indicate which disease is present.

Acute viral and bacterial infections and chronic diseases such as primary ciliary dyskinesia, non–cystic fibrosis bronchiectasis (which is often caused by atypical mycobacterial infection), panbronchiolitis, and immunodeficiency states (e.g. hypogammaglobulinemia, human immunodeficiency virus infection, organ transplantation, and hematologic malignant conditions) all have a component of mucous dysfunction. In addition, retained mucous is a problem in intubated patients and those in whom lung mechanics are disrupted as a result of paralysis, immobilisation, or surgery; atelectasis and pneumonia are common complications in such patients.

Mucous is an important defence against perturbations from the outside world at wet epithelial surfaces throughout the body, including the eyes, airways, gastrointestinal tract, and genitourinary tract. Its importance is revealed when the mucous barrier malfunctions in disorders such as dry eyes or inflammatory bowel disease. Mucous is a remarkable and versatile substance, with properties on the border between a viscous fluid and a soft elastic solid.

Airway mucous is a heterogeneous mixture of secreted polypeptides, cells and cellular debris that is present in the fluid lining the airway surface sub-phase or is tethered together at the fluid surface by oligomeric mucin complexes. Elevated mucin production increases the number of intracellular mucin stores contained within airway secretory cells; in addition, increased mucin exocytosis increases the thickness and viscosity of the extracellular mucous gel positioned above the surface epithelium.

Although a deficient mucous barrier leaves the lungs vulnerable to injury, excessive mucous or impaired clearance contributes to the pathogenesis of all the common airway diseases. Effective mucous clearance is essential for lung health, and airway disease is a consistent consequence of poor clearance. Healthy mucous is a gel with low viscosity and elasticity that is easily transported by ciliary action, whereas pathologic mucous has higher viscosity and elasticity and is less easily cleared. The conversion from healthy to pathologic mucous occurs by multiple mechanisms that change its hydration and biochemical constituents; these include abnormal secretion of salt and water, increased production of mucins, infiltration of mucous with inflammatory cells, and heightened bronchovascular permeability.

In general, the hydration of mucosal surfaces determines the efficiency of mechanical transport, for example, during drinking and swallowing. While both ciliary activity and mucin secretion are major determinants of airway mucous clearance, the balance of evidence from the clinical literature suggests that hydration is the dominant variable governing mucous clearance.

The principal symptoms of impaired mucous clearance are cough and dyspnoea. Physical signs of impaired mucous clearance include cough, bronchial breath sounds, rhonchi, and wheezes. Retained mucous and inflammatory exudates may appear as localized atelectasis or linear or branched opacities on plain radiographs of the chest, and as luminal filling in proximal airways or tree-in-bud opacities in peripheral airways on computed tomographic examination.

Treating a cough is not at all equivalent to treating the illness causing it. However, since airway inflammation, mucous hypersecretion and impaired mucociliary clearance are often major characteristics of most conditions that produce a wet cough, any treatment approach that takes these into account will be at least partially successful.

Cough-suppressant therapy, also known as antitussive therapy, incorporates the use of pharmacologic agents with mucolytic effects. When administered in combination with a cough suppressant such as dextromethorphan (the “DM” in some medication names) there is a potential risk of increased airway obstruction.

The intent of this type of therapy is to reduce the frequency and/or intensity of coughing on a short-term basis. Numerous mucoactive agents with a variety of actions on the airways or secretions have been discovered and utilised. Patients who are most likely to benefit from mucoactive therapy usually have a history of increased sputum expectoration and a preserved airflow. However, the effectiveness of therapy in an individual patient can be difficult to assess.

Common mucoactive medications include expectorants, mucolytics, and mucokinetic drugs. Expectorants are meant to increase the volume of airway water or secretion in order to increase the effectiveness of cough. Although expectorants, such as guaifenesin, are sold over the counter, there is no evidence that they are effective for the therapy of any form of lung disease.

Expectorants are defined as medications that are taken to improve the ability to expectorate purulent secretions. This term is now taken to mean medications that increase airway water or the volume of airway secretions. The most commonly used of these are simple hydration including both bland aerosol administration and oral hydration, iodide containing compounds such as SSKI or iodinated glycerol, glyceryl guaiacolate or guaifenesin, and ion channel modifiers such as the P2Y2 purinergic agonists. Most of these medications or manoeuvres are ineffective at adding water to the airway and those that are effective are also mucous secretagogues increasing the volume of both mucous and water in the airways. Despite widespread use, iodinated compounds, guaifenesin, and simple hydration are ineffective as expectorants.

Mucolytics are medicines that modulate mucous production and decrease mucous viscosity. Their mucous thinning effects may improve mucociliary transport and thereby facilitate expectoration of mucous out of the distal bronchial tree. Improved clearance and expectoration of mucous can prevent mucous plugging of small airways and may theoretically improve gas exchange and lessen the probability of post-obstructive infection. Through these complementary effects, mucolytics could potentially play a role in reducing exacerbations in chronic obstructive pulmonary disease (COPD).

Mucolytic medications depolymerise either the mucin network (classic mucolytics) or the DNA-actin polymer network (peptide mucolytics) and in so doing reduce the viscosity and elasticity of airway secretions. Mucous has viscoelastic properties of both liquids (viscosity) and solids (elasticity). Thus it is a gel and both the viscous (energy loss) and elastic (energy storage) properties are essential for mucous spreading and clearance. Mucolytics such as bromhexine are often used in combination with bronchodilators such as salbutamol (β2 selective), theophylline (xanthine), and orciprenaline (β2 -adrenoceptor (AR) agonists) as their modes of action are considered to be complimentary.

Bromhexine (BHC) is a derivate of the Adhatoda vasica plant used in some countries for the treatment of various respiratory diseases. Bromhexine has been found to enhance the secretion of various mucous components by modifying the physicochemical characteristics of mucous. These changes, in turn, increase mucociliary clearance and reduce cough.

BHC is a widely prescribed mucoactive over-the-counter drug used to treat a range of respiratory conditions, mainly conditions associated with mucous secretion disturbances. These conditions are predominantly associated with augmented inflammation and vulnerability to the development of infections.

Studies in animals and humans have reported actions that influence the production of mucosubstances, sputum quality and quantity, ciliary activity, antibiotic penetration and cough severity and frequency. These actions characterise the basic mucoactive activity of BHC and differentiate it from other drugs.

A recent study investigated the effect of BHC on sputum fibre systems during exacerbations of pulmonary disease in 53 patients between 15 and 86 years old with asthmatic bronchitis and acute or chronic bronchitis. Morning sputum was collected three times weekly and fixed smears were stained and observed under fluorescent and polarised light to examine DNA or mucopolysaccharide (MPS) fibre systems, respectively.

In patients treated with BHC, the MPS fibres usually disappeared within 7–12 days (average 10 days). Moreover, patients in the BHC group demonstrated clinical progress in that they were more able to expectorate and sputum production markedly decreased. The authors concluded that antibiotics did not affect the MPS fibres, but BHC therapy could reduce or entirely remove these fibres from the sputum.

In a comparison of the available literature on BHC, it was proven to be safe in all studies. In most of the research reports, only gastrointestinal intolerance and headache were reported as side effects and were probably related to dosage. In all available studies, BHC treatment is associated with favourable improvements in mucous clearance and is indicated in various respiratory disorders with abnormal mucous secretion and impaired mucous transport.

Ambroxol, a metabolite of bromhexine, has been used in the prevention of neonatal respiratory distress syndrome with no reported maternal or foetal/neonatal side effects. Additionally, ambroxol and bromhexine have been shown to be scavengers of both superoxide and hydroxyl radicals as determined by pulse radiolysis experiments. The dismutation of superoxide was accelerated 3-fold by bromhexine and 2.5-fold by ambroxol over the rate of spontaneous dismutation. These effects may be clinically relevant in the treatment of oxidant-associated lung damage induced by inflammatory agents and/or environmental pollutants.

Zanasi, A, et al 2017. A reappraisal of the mucoactive activity and clinical efficacy of bromhexine. Multidisciplinary Respiratory Medicine, 12:7.