While it is often assumed that patients who regain weight do so because of a lack of willpower, there are plenty of metabolic factors that compel the body to maintain weight and regain it once it has been lost. 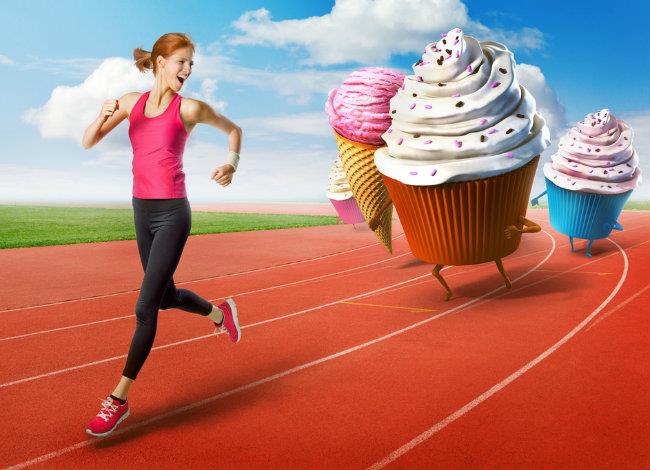 Weight loss and gain is not linear and depend in part on metabolic adaptation.

Obesity has become an international public health problem (Mendieta-Zeron et al 2008). Every year, millions of people – as diverse as obese and lean, teenagers and older adults, sedentary and elite athletes, commoners and celebrities – attempt to lose weight on some form of diet (Dulloo and Montani 2015).

They are often encouraged by their parents, friends, health professionals, training coaches, a media that promotes a slim image and a diet‐industry that in Europe and United States alone has an annual turnover in excess of R2.2 trillion (Dulloo and Montani 2015). Despite the adverse health problems associated with obesity, not a single country in the world had a significant decrease in obesity prevalence in the past three decades (Vink et al 2016).

While a dietary intervention (DI) can achieve significant weight loss, the greatest challenge is the seemingly inevitable weight regain in the following years (Vink et al 2016). One-third to two-thirds of weight lost by dieting is often regained within 1 year and almost all is regained within 5 years (Dulloo and Montani 2015).

With studies of the long-term outcomes showing that at least one-third of dieters regain more weight than they lost, together with prospective studies indicating that dieting during childhood and adolescence predicts future weight gain and obesity, there is concern as to whether dieting may paradoxically be promoting exactly the opposite of what it is intended to achieve (Dulloo and Montani 2015). Furthermore, many of the reasons for weight regain seem to be biologically driven, indicating that it is simplistic to view weight regain in the context of a lack of willpower on the patient’s part (Blomain et al 2013).

On the contrary, the strong heritability of body fatness and physiological/behavioural responses to alterations in body weight, coupled with the relative long-term constancy of body weight in adults despite substantial fluctuations in energy intake, indicate that body weight is “regulated” (Rosenbaum et al 2010). Almost anyone who has ever lost weight can attest that it is harder to sustain weight loss than to lose weight (Rosenbaum et al 2010).

Maintenance of a 10% or greater reduced body weight is accompanied by decreases in energy expenditure to levels significantly below what is predicted solely on the basis of weight and body composition changes (Rosenbaum et al 2010). Individuals maintaining a reduced body weight after non-surgical weight loss are also inclined towards greater rather than diminished energy intake (Rosenbaum et al 2010).

The adaptation that causes slowing of weight reduction in the weight loss phase also causes weight regain in the longer term (NHMRC 2013). The changes in energy balance regulation in the body that lead to reduced energy expenditure persist for at least one year (NHMRC 2013). Increasing evidence indicates that changes in appetite-regulating hormones also occur after diet-induced weight loss, including decreased levels of leptin, insulin, cholecystokinin, triiodothyronine (T3) and an increased level of ghrelin (NHMRC 2013). Many of these changes would be expected to reduce feelings of fullness after eating (satiety) and increase hunger (NHMRC 2013).

However, rapid weight loss diets create a larger energy deficit and contain lower absolute amounts of protein compared to a more gradual weight loss approach, which increases the risk of muscle mass loss (Vink et al 2016). Muscle mass is a key contributor to resting energy expenditure and could play a role in long‐term weight management (Vink et al 2016). Maintenance of a 10% or greater reduced body weight is accompanied by decreases in energy expenditure to levels significantly below what is predicted solely on the basis of weight and body composition changes (Rosenbaum et al 2010).

This disproportionate decline in energy expenditure would not be sufficient to account for the over 80% recidivism rate to pre-weight loss levels of body fatness after otherwise successful weight reduction if there were a corresponding reduction in energy intake (Rosenbaum et al 2010). In fact, reduced body weight maintenance is accompanied by increased energy intake above that required to maintain reduced weight (Rosenbaum et al 2010).

There is a marked decline in metabolic rate associated with reductions in food intake and body weight, which appears to be designed to maintain a stable body weight at various levels of energy intake (Tremblay et al 2007). This suggests that compensations in energy expenditure have the potential to prevent deviations in energy balance when energy intake is changing (Tremblay et al 2007).

Weight loss is not linear and depends in part on metabolic adaptation; at a low level of food intake, this was calculated to be equivalent to maintenance of 2.5 MJ (or about 600 kcal) of body energy per day and may help the organism to survive (Muller and Bosy-Westphal 2013). The process by which this occurs is referred to as adaptive thermogenesis (AT) with weight loss, which is an underfeeding‐associated fall in resting and non‐resting energy expenditure (REE, non‐REE), independent of body weight and body composition (Muller and Bosy-Westphal 2013). 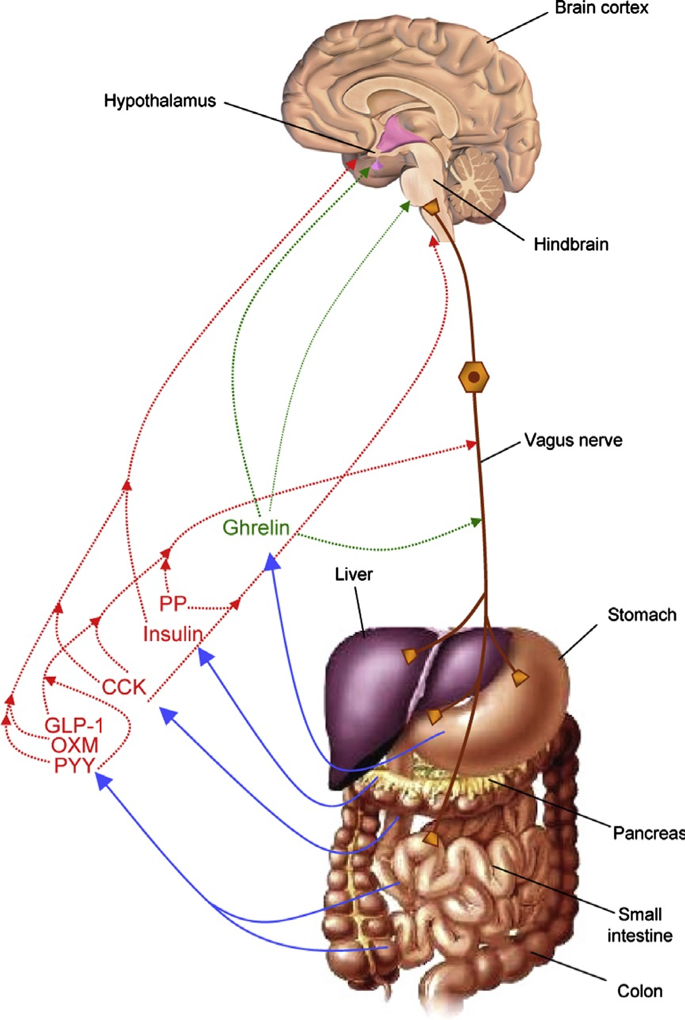 GLP-1 and OXM are released from distal intestinal L cells in the mucosa of the ileum and colon in response to free fatty acids (FFAs) and carbohydrates (Hirasawa et al 2005). Both peptides inhibit feeding when they are centrally or peripherally administrated (Murphy and Bloom 2006). Furthermore, chronic administration of GLP-1 and OXM decreases weight gain and adiposity in humans (Wynne et al 2005).

Ghrelin administration stimulates food intake and body weight gain when administered centrally and peripher­ally (Yu and Kim 2012). Moreover, plasma ghrelin concentrations are elevat­ed during a fast. Thus, ghrelin is considered to be a physiologi­cal hunger hormone (Yu and Kim 2012).

In recent years, neuroendocrine pathways have been identified that are involved in both drug- and food-seeking behaviors (Meule 2011). The hypothalamus, a small area of the brain located just below the thalamus, is the regulating center of appetite and energy homeostasis (Yu and Kim 2012). Defective satiety generation in the hypothalamus and brainstem appears to lead to overeating and progression of obesity (Yu and Kim 2012). The arcuate nucleus (ARC) of the hypothalamus is adjacent to the median emi­nence, a circumventricular organ having defective blood-brain barriers (BBB) (Yu and Kim 2012).

Thus, circulating hormones and nutrients can access the ARC without passing the BBB. Moreover, the ARC surrounds the third cerebroventricle, so hormones and nutrients in the cerebrospinal fluid can diffuse into the extracellular flu­ids of the ARC (Yu and Kim 2012). Due to these anatomical features, the ARC is considered to be a hypothalamic area primarily sensing pe­ripheral metabolic signals (Yu and Kim 2012).

The role of leptin

Much of this biological opposition to sustained weight loss is mediated by the adipocyte-derived hormone leptin (Rosenbaum et al 2010). Activation of hypothalamic leptin signaling causes an increase in neuronal activity of POMC/CART neurons while it decreases activity of NPY/AgRP neurons, resulting in reduced food intake and enhanced energy expenditure (Yu and Kim 2012).

The obese gene coding leptin is exclusively produced in white adipocytes and released to systemic circula­tion and plasma leptin concentrations increase in proportion to body fat mass and thus can be used as biomarker of adiposity (Yu and Kim 2012). Data suggests that the weight-reduced state is one of relative leptin deficiency, characterised by leptin-mediated behavioural and neuronal activity responses that favour energy conservation and increased food consumption (Rosenbaum et al 2010).

Data from the National Longitudinal Survey of Youth 1979 Cohort indicates that adult body mass trajectories are relatively predictable and that four trajectory groups, namely ‘normal weight’, ‘overweight’, ‘late adulthood obesity’ and ‘early adulthood obesity’ can be identified (Ostbye et al 2010). Males, people of African origin and those born later had higher odds of being in the three latter groups, while more education and years married lowered the trajectory within each group (Ostbye et al 2010).

The prevalence of most health outcomes was lowest in the ‘normal weight’ group, somewhat greater in the ‘overweight’ group, greater again in the ‘late adult obesity group’ and highest in the ‘early adulthood obesity’ group (Ostbye et al 2010). Regular body mass index screening and monitoring in early adult life may identify a person as belonging to one of these four groups early, and allow the individual and healthcare providers opportunities to initiate behavioural or other interventions better tailored to the specific group (Ostbye et al 2010).

Fifty percent or more of members in the ‘overweight’ group had a BMI of <25 kg/m2 until around age 30 years, beyond which most were overweight (Ostbye et al 2010). Although there was a gradual increase in the proportion of those obese, especially after age 35 years, it did not exceed 30% at any age (Ostbye et al 2010). For at least some people, then, weight and BMI is likely to increase with age in many adults without a doctor’s intervention (Ostbye et al 2010).

Figure 2: A schematic representation of the multiple systems reg­ulating appetite (Yu and Kim 2012).

Increasing evidence suggests that binge eating-related disorders could be related to addiction-like eating patterns due to the addictive potential of hyper-palatable foods (Meule 2011). The prevalence of food addiction is increased in obese individuals and even more so in obese patients with binge-eating disorder (Meule 2011). Over 50% of patients with binge-eating disorder are food addicts (Gunnars 2015).

The most common food addiction symptoms include consuming large amounts for a long period, repeated attempts to cut down, and continued use despite adverse consequences (Meule 2011). In one study, 15% of overweight/obese individuals seeking weight loss treatment were classified as food addicts (Gunnars 2015). Another study found that that addiction-like behaviour, even in the absence of downright addiction, was a major driver of overeating and weight gain (Gunnars 2015).

Treating overweight/obesity in the context of weight regain

Acceptance of personal responsibility for all aspects of weight control, negative self-image, a critical medical incident, frequent vigorous exercise, prior experience reaching a weight goal, less eating in response to emotions, and better nutrition are some of the factors cited as important by people who have been successful at losing weight and maintaining weight loss (Levy and Williamson 1988). For those who are following some form of obesity-related treatment programme, it has been demonstrated that compliance leads to goal attainment, which in turn results in patient satisfaction (Dellande et al 2004).

There are individual differences in reactions to food (due to genetic predisposition or to prior experience) and some people can consume food in moderation more easily than others (Pelchat 2009). The rewarding properties of alcoholic beverages and sweet (or palatable) foods are thought to be mediated by the release of certain transmitters which leads to higher levels of striatal dopamine, that is, to what we think is rewarding (Pelchat 2009).

In a survey of members of the American Society of Bariatric Physicians (ASBP), ninety-eight percent of the physician respondents indicated that they used medications in their treatment of obesity, and 97% of those that used medication used phentermine (Hendricks et al 2009). In addition, although phentermine is only approved for use up to 12 weeks, more than half of the obesity specialists responding to the survey (56%) used phentermine as long as they and their patients felt it was helpful in achieving weight-loss or weight-maintenance goals (Hendricks et al 2009).