Epidemiological studies have long suggested a correlation between hyperglycaemia and higher rates of cardiovascular disease (CVD). Meta-analysis of these studies shows that a 1% increase in Hba1c increases CVD risk by 18%. 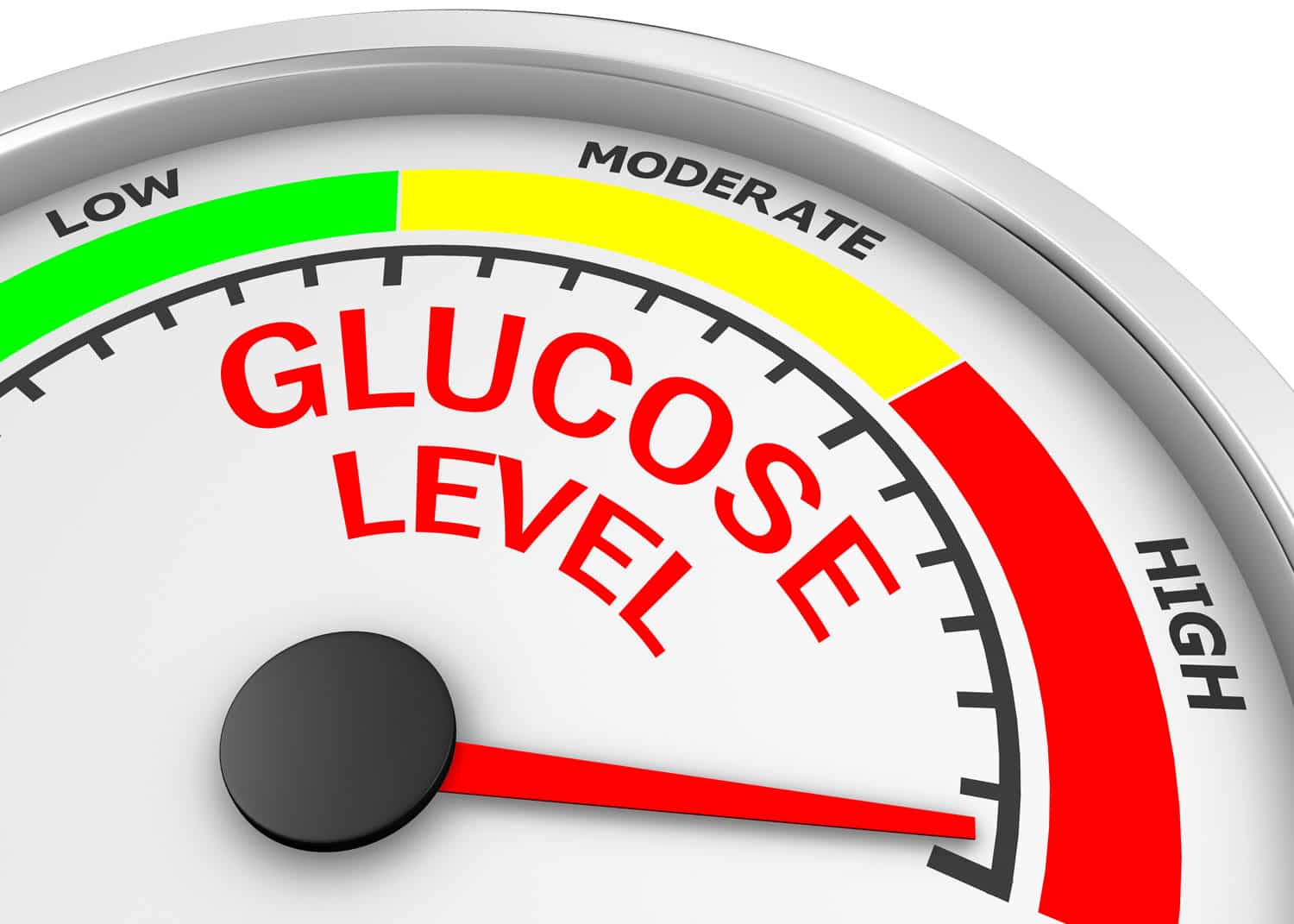 Most guidelines recommend targeting an Hba1c of 7% or less early in the course of diabetes.

The corollary of this is that reducing hyperglycaemia should reduce CVD risk. This seemingly logical assumption has however been particularly difficult to demonstrate.

UKPDS looked at the benefits of tight glycaemic control in newly diagnosed diabetic patients and in the post-intervention study showed benefit in initial tight glycaemic control. Some (VADT, ACCORD and ADVANCE) were designed to show CVD risk reduction in patients with long-standing diabetes (8-12 years). None of them demonstrated benefit and ACCORD actually showed a significant increase in both total and CVD mortality.

Role of hypoglycaemia in CVD

Attempts to explain these results, which seemed to defy logic have looked into the role that hypoglycaemia may have played. The assumption that the gentler approach to reaching Hba1c targets in the ADVANCE trial, may have explained the differences between hypoglycaemia and the negative outcomes seen in the ACCORD trial.

This resulted in an avalanche of false assumptions about the effects of hypoglycaemia on cardiovascular risk. This was eventually shown not to be true is a series of post-hoc analyses. Once the dust settled and people came to their senses the focus shifted to the individual drugs involved.

Just prior to this, concerns that some hypoglycaemic agents while being effective at lowering Hba1c, increased the risk of heart failure (HF) with concerns about myocardial infarctions (MIs). This class of agents (thiazolidinediones) suffered a dramatic reduction in popularity as a result of what turned out to be another example of ‘lies, damn lies and statistics’.

However, the consequence of this concern was that regulatory authorities mandated that all new hypoglycaemic agents first prove CVD safety with adequately powered randomised controlled trial before launch.

This led to an avalanche of CVD trials with the launch of the new classes of hypoglycaemic agents; namely the dipeptidyl peptidase 4 (DPP4) inhibitors, glucagon-like peptide-1 (GLP1) analogues and sodium-glucose cotransporter-2 (SGLT2) inhibitors.

The first of the class of new drugs to do these CVD safety trials were the DPP4 inhibitors. There was much optimism about these trials given the low risk of hypoglycaemia and weight neutral hypoglycaemic effect. It was therefore disappointing that despite the Hba1c reductions, these trials once again showed no CVD risk reductions.

Admittedly the trials were powered only to demonstrate safety, but reassuringly no increase in adverse CVD events, CVD mortality or all-cause mortality was demonstrated. One agent, saxagliptin, did however slightly increase the risk of hospitalisation for HF. 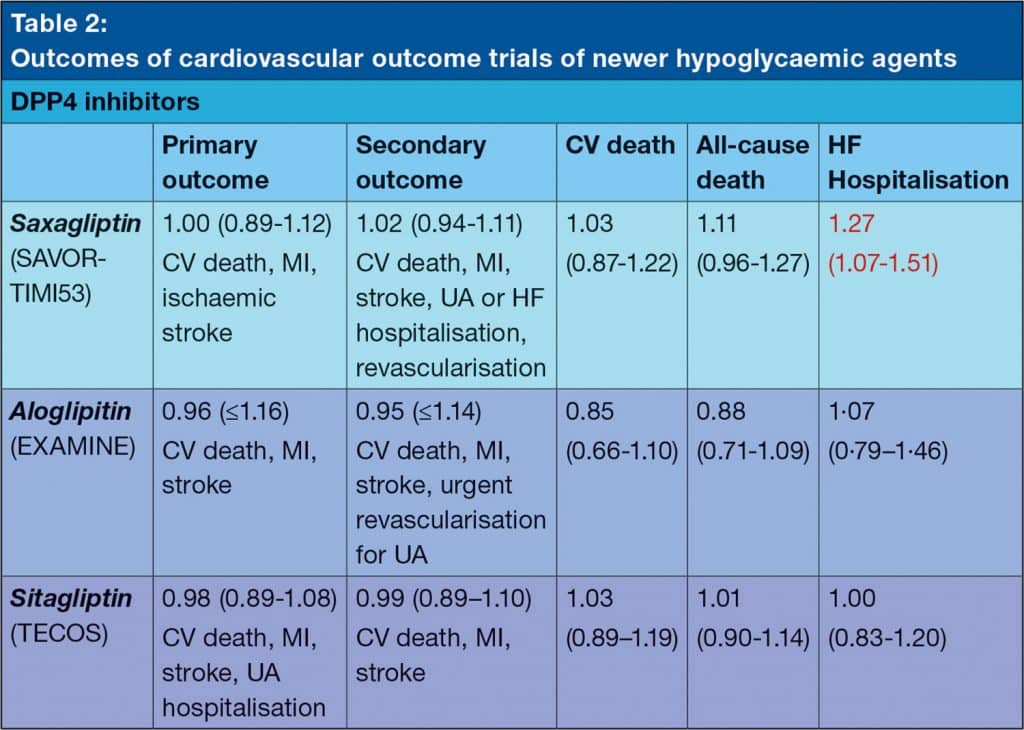 The second class of drugs to produce CV safety data was the GLP1 analogues. These agents more effective at reducing Hba1c, also marginally improve lipid profiles and marginally reduced Hba1c. They are also result in modest weight loss. Once again expectations were high that they may be the key to showing CVD risk reduction through improvements in glycaemic control. 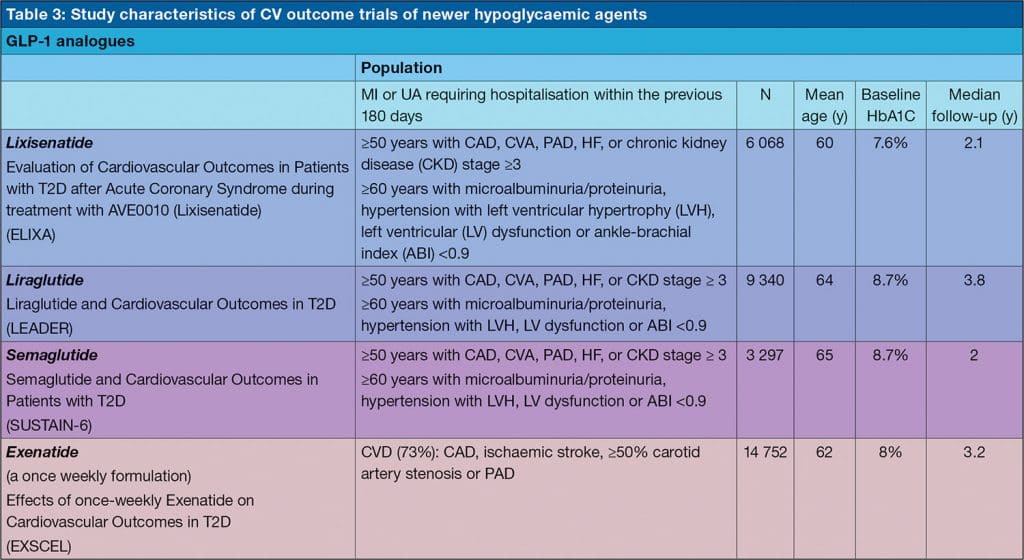 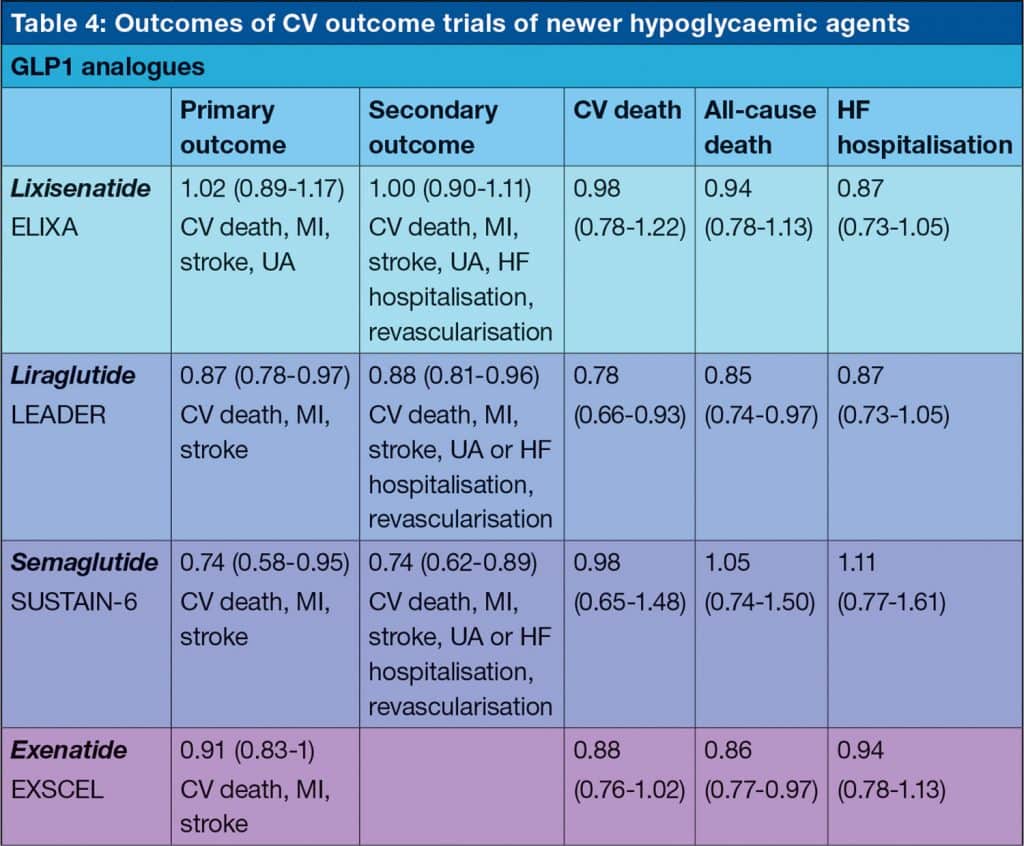 In this respect, the GLP1 analogues did not disappoint. The LEADER trial and SUSTAIN-6 both demonstrated CVD risk reduction.

The third class of agents producing CVD safety data are the SGLT2 inhibitors. A novel category that exert their modest glucose lowering effect by inhibiting renal tubular reabsorption of glucose. The resulting glycosuria in turn has a modest diuretic effect on blood pressure.

The loss of sodium and water has a modest blood pressure lowering effect. The glucose loss from the body causes a small weight reduction of a kilogramme or two and they do not cause hypoglycaemia. Although there was no expectation of CVD risk there was also little expectation of CVD benefit due to their rather modest effects on all parameters.

The results of the EMPA-REG trial were perhaps then somewhat of a surprise – especially the clear separation of benefits in the active treatment group almost from the onset in contrast to the much later onset of benefit seen in the LEADER trial with liraglutide. The CVD risk reductions seen in the EMPA-REG trial were driven largely by lower CVD death without significant differences in MI or stroke.

In a rather large paradigm shift from older hypoglycaemic medications (rosiglitazone and saxagliptin), empagliflozin reduced HF admissions by 35%. This result was echoed in the CANVAS, which produced almost identical rates of reduction of admission for HF, however without the reduction in CVD and all-cause mortality seen in EMPA-REG.

Similar results were seen in the more recently published DECLARE-TIMI 58 trial. Once again, the positive CVD risk reduction was driven by significantly lower rates of hospital admission for HF.

This is understandable as a breakthrough hypoglycaemic drug, which reduces CVD risk and is clearly superior to others in its class. With this in mind, the trial needs to be carefully evaluated in a way that actively tries to avoid this potential bias.

One conclusion could be that these CV safety trials, designed to prevent potential harm from newer hypoglycaemic agents, have inadvertently unearthed a set of drugs with proven CVD benefit in patients with diabetes and potentially even in patients without diabetes, but CVD disease.

Some of the newer agents (empagliflozin and liraglutide) have even had specific labels approved by the American Food and Drug Administration to reduce the risk of CVD death in patient with diabetes and CVD.

Before reaching any final conclusions, it is necessary to take a step back and look at the bigger picture of the burden of disease caused by hyperglycaemia and see how these drugs may assist in reducing this.

John Ioannidis has published and written extensively on the problems with current clinical research and has proposed simple solutions to address this. It is perhaps important to use some of his ideas on evaluating the usefulness of this current batch of clinical studies. 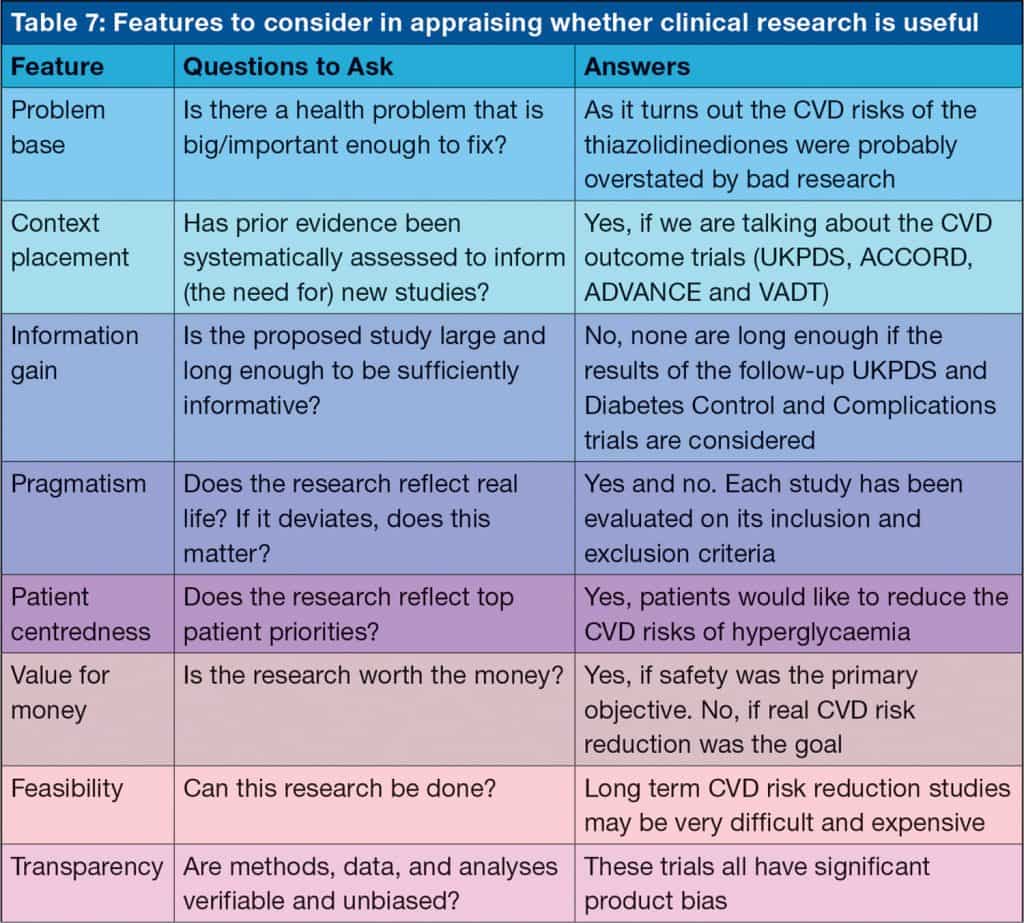 The long-term observation follow-up results of the UKPDS show that intensive glucose lowering strategies (Hba1c <7%), with the aim of reducing CVD complications are most effective when instituted as early as possible in the course of diabetes.

The positive results of these newer trials suggest that there may be CVD benefit from tight glycaemic control in selected patients with CVD and type 2 diabetes by using specific hypoglycaemic agents.

Cost has to be considered with these newer agents and with this in mind, it is worth reviewing the cost-effectiveness studies done based on the UKPDS findings. One of these showed that intervention was most cost-effective when applied to patients with higher Hba1c levels.

In summary, most guidelines recommend targeting an Hba1c of 7% or less early in the course of diabetes. This should be the target for most patients. In patients with CVD or with specific risk factors for CVD doing this some of the newer agents (GLP-1 receptor agonists [liraglutide/semaglutide] and the SGLT2 inhibitors [dapagliflozin/empagliflozin/canagliflozin]) may add additional CVD risk reduction benefit. Clinicians treating these patients need to understand where and in whom these benefits may apply to more effectively reduce CVD risk in their diabetic patients.