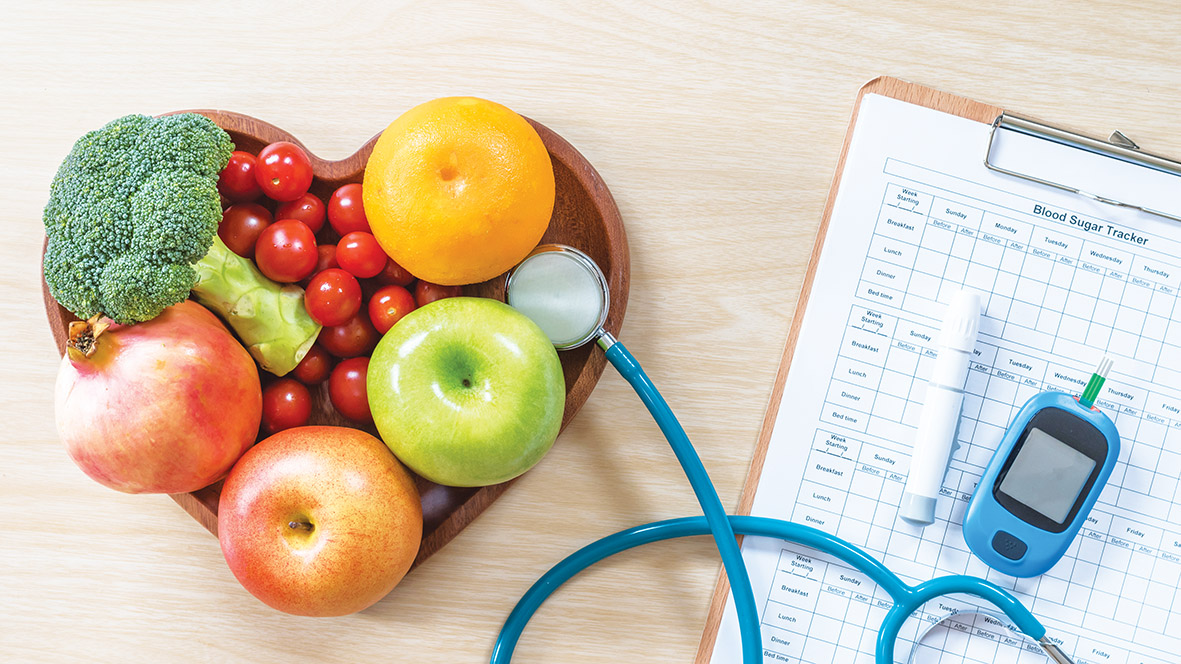 Many of the micronutrients, vitamins and elements required to manage diabetes can be found in common food sources

Diabetes prevalence has nearly doubled since 1980, from 4-8%. Approximately 3.7 million deaths are as a result of diabetes and the subsequent increase in cardiovascular risk. More than 90% of diabetic patients present with type 2 diabetes mellitus (T2DM).

DM AND THE EFFECTS OF METFORMIN

Metformin is a well-established first-line medication in type 2 diabetes, lowering glucose production in the liver and improving glucose utilisation. These are important factors in achieving glycaemic control.

Metformin is not the only antihyperglycaemic agent associated with improvements in cardiovascular morbidity and mortality, which is a major cause of death in T2DM patients. However, long-term metformin treatment is well known to cause vitamin B12 (cobalamin) deficiency. This side effect was discovered within the first 10-12 years after metformin came into clinical use. Furthermore, metformin treatment is also associated with decreased serum folate concentration, but not resulting in folate deficiency (Mazokopakis and Starakis, 2012).

Co-enzyme Q10 (CoQ10) was identified more than 50 years ago as an electron carrier in the mitochondria and as a primary antioxidant (Crane, 2008). It is present in all membranes and it appears to exceed other antioxidants in quantity and efficiency (Bentinger et al, 2007).

CoQ10 levels can be used as a marker of antioxidant capacity (Hasegawa et al, 2005), and is decreased in diabetic patients (Dhanasekaran and Ren, 2005, El-ghoroury et al, 2009). CoQ10 supplements are regarded as safe (Bhagavan and Chopra, 2006, Galpern and Cudkowicz, 2007) with very few side effects or drug interactions and was found to play a positive role in DM providing mild to significant symptomatic benefits (Bonakdar and Guarneri, 2005) (Villalba et al, 2010) (Lance et al, 2012).

An in vitro test in 2007 for the first time presented proof that CoQ10 has a beneficial effect in protecting against endothelial dysfunction induced by high glucose (Tsuneki et al, 2007). Oral supplementation of CoQ10 increased levels of ubiquinol-10 within circulating lipoproteins and had a direct anti- atherogenic effect. It also showed several positive effects in respect to endothelial function (Littarru and Tiano, 2007). The effect on the microcirculatory endothelial function was also investigated (Lim et al, 2008). DM patients are at risk of vascular injury (Lim et al, 2006), which increases the importance of an antioxidant such as CoQ10 for these patients.

The supplementation of CoQ10, like most vitamin and natural substances remain controversial with not all reviewers agreeing as to the significance of the results (Golbidi et al, 2011). Supplementation of 200mg CoQ1O per day seemed to improve glycemic control by improving insulin secretion with no obvious side effects (Mezawa et al, 2012). CoQ10 at 400mg per day improved clinical outcome of diabetic polyneuropathy (Hernandez-Ojeda et al, 2012). In a double-blind, placebo-controlled study with 64 T2DM patients, CoQ10 improved glycemic control as well as total and low density lipoprotein (LDL) cholesterol levels (Takeda et al, 2011, Kolahdouz Mohammadi et al, 2013).

CoQ10 also seems to have a positive effect on the immune system of the DM patient in that it induced changes in activation markers in peripheral natural killer cells (Brauner et al, 2014). Not only DM, but neurodegenerative disorders, cancer, fibromyalgia and cardiovascular diseases have also been associated with low CoQ10 levels (Sanchez et al, 2014).

Vitamin B1 (thiamine) is marginally deficient in diabetes mellitus (Tamai, 1999). it does not seem to play a role in glucose lowering or directly impacting the diabetes, but could play a role in improving endothelial function and thus slow development and progression of atherosclerosis (Arora et al, 2006). Low vitamin B1 levels, even if it is marginally low, are prevalent in DM (Thornalley et al, 2007). It thus seems as if vitamin B1 has a role specifically in contra-acting diabetic complications (Beltramo et al, 2008), mainly through preventing the formation of harmful by products of glucose metabolism, improving endothelial function and reducing oxidative stress (Page et al, 2011). 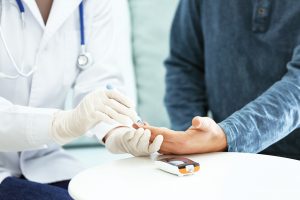 Proper supplementation can help to manage the effects of diabetes mellitus

Chromium is a universal metal, which can be found in water, soil and biological systems. The three most stable forms of Cr that occur in the environment are: 0 (metal and alloys), +3 (trivalent Cr) and +6 (hexavalent Cr) valence states. Trivalent Cr3 is considered to be an essential element, both in animal feeding and human nutrition.

The importance of Cr in human nutrition was suggested when it was found that Cr supplementation reversed glucose intolerance in hospitalised patients receiving long-term total parenteral nutrition. However, the ‘essentiality’ of Cr was questioned due to its universal or ubiquitous nature and its low dietary requirement. Nonetheless, several clinical studies have documented a beneficial effect of Cr in insulin resistance and T2DM (Hua et al, 2012).

Chromium is absorbed together with other metal ions in the gut through unsaturated passive transport. The efficiency of this process is very low and the average absorption ranges from 0.4%-2.5%. The absorption process depends on the Cr content in the diet and on its chemical form as well as the presence of other food components. Studies in rats indicated the increased absorption of Cr nicotinate (1.3%) and Cr picolinate (1.1%) salts compared to Cr chloride (0.9%) (Lewicki et al, 2014).

However, the presence of various foods and constituents in the diet has a significant impact on the amounts of Cr absorbed form the gastrointestinal tract. Starch, simple sugars, ascorbic acid, oxalic acid, nicotinic acid, some amino acids and aspirin increase Cr absorption, whereas high concentrations of phosphate, calcium, magnesium, titanium, zinc, vanadium and iron reduce its absorption (Lewicki et al, 2014).

Following absorption from the intestine, Cr3 is released into the bloodstream and bound by proteins involved in iron metabolism. This Cr- transferrin complex is transported to the cells and the efficiency of Cr transfer through the cell membrane depends on insulin concentration (Clodfelder and Vincent, 2005). The highest concentrations are found in the liver, kidneys and spleen, while slightly lower levels are observed in heart, muscle, pancreas, lungs, bones and brain (Lewicki et al, 2014).

More than 80% of Cr is excreted in the form of urine, while the remaining part is excreted as faeces and sweat in humans, large amounts of sugar, exhaustive physical exercise, pregnancy and lactation also increase the amount of Cr excreted in the urine (Lewicki et al, 2014). Taken together, regardless of the exact mechanisms, Cr both in vivo and in vitro enhances the membrane translocation of the insulin-dependent glucose transporter-4 (Glut4) under insulin-resistant conditions, which may partly explain the beneficial effects attributed to Cr. Evidence also suggests that Cr indeed down-regulates the proteins involved in insulin resistance and that (similar to vitamin D) it alleviates endoplasmic reticulum stress in the cells, although the exact mechanism by which it does so is unclear.

ZIP members facilitate zinc influx into the cytosol, whereas CDF members facilitate its efflux from the cytosol. Zinc metabolism is mainly regulated through Zn-dependent control of transcription, translation and intracellular trafficking of these transporters (Kambe et al, 2004). Abnormalities of Zn homeostasis such as its deficiency may be associated with various pathogeneses of chronic diseases such as DM (Song et al, 2005). Epidemiological studies have also indicated that exposure to low concentrations of Zn in drinking water is associated with an increase in T1DM (Haglund et al, 1996).

Diabetes in itself also significantly impairs Zn homeostasis eg in a study by Terres-Martos and colleagues, serum Zn concentrations of 18 diabetic patients were significantly lower compared to healthy, age-matched controls, whereas copper levels were not significantly different (Terres-Martos et al, 1998).

Therefore, all these observations strongly support the notion that Zn deficiency occurs in diabetic subjects and that Zn supplementation will benefit or correct the DM-induced Zn status and systemic antioxidant capacity (Song et al, 2005).

There is a high prevalence of vitamin D deficiency in people with DM and an independent association between this deficiency and the presence of nephropathy could also be shown (Diaz et al, 2009). There are, however, a lot of factors ie sex, age and sun exposure that play a role (Hidayat et al, 2010).

In a study of 33 people without DM, the correction of their vitamin D deficiency did not affect their glucose or insulin levels or sensitivity during their glucose tolerance test (Tai et al, 2008). Another small study with 12 health subjects also proved negative (Simha et al, 2012). Vitamin D supplementation does thus not seem to have a protective effect in healthy/non-diabetic patients (Pilz et al, 2013).

Although more and larger studies are warranted, there is sufficient evidence that vitamin D levels of at least 30ng/ml needs to be maintained as it has been shown to prevent glucose increases, prevent insulin resistance, enhance sensitivity and reduce blood pressure in DM patients (Cavalier et al, 2011). Vitamin D replacement also has beneficial effects on the risk factors for cardiovascular disease in DM patients, decreasing cholesterol and diastolic blood pressure (Bonakdaran et al, 2013).

A vitamin D deficiency might as much as double the risk of cardiovascular disease in DM. It is postulated that this has to do with cellular activation of monocytes and or macrophages (Riek et al, 2014). A low vitamin D level is also associated with arterial stiffness in DM patients (Lee et al, 2012). An interesting study among the Saudi population showed that vitamin D levels remained below expected or normal levels even 18 months after receiving 2000IU vitamin 03 per day, yet there were still significant improvements in their lipid profile and insulin resistance (measured according to a homeostasis model) (AI-Daghri et al, 2012).

The dosage and interval of treatment seems to play an important role. The presence of chronic kidney disease is associated with resistance to the correction of vitamin D deficiency in DM (Alshayeb et al, 2013). Vitamin D deficiency is also independently associated with progression and/or outcome of diabetic nephropathy (Fernandez-Juarez et al, 2013).

To answer the CPD questions for this article, go to the Medical Chronicle July CPDs page.