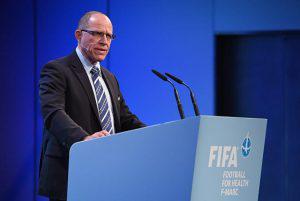 Prof Kramer’s appointment marks the first time in over 20 years that someone new will be presiding over the medical operations of these iconic major football tournaments.

Prof Efraim Kramer of the Faculty of Health Sciences at the University of Pretoria (UP), has been appointed as the new FIFA Tournament Medical Officer for the FIFA Confederations Cup in Russia 2017 and the FIFA World Cup Russia 2018.

Prof Kramer specialises in Sports Medicine and has been passionately involved in emergency medicine for the last 30 years, including involvement in mass gathering medicine, which resulted in him being called upon for the 2010 FIFA World Cup that took place in SA. Since then, he has been actively involved with FIFA Medical in helping to establish international norms and standards for football medical services and football emergency medicine, with a particular focus on the prevention and management of sudden cardiac arrest on the football field. Most recently, he provided emergency medical services for the 2016 FIFA U20 Women’s World Cup that took place in Papua New Guinea from Sunday, 13 November, to Saturday, 3 December 2016.

Prof Kramer says that it was with humility and gratitude, yet also a sense of national pride and academic gratification, that he accepted the invitation by Baron Dr Michel D’Hooghe, Chairman of the FIFA Medical Committee and known as the ‘father of Football Medicine’, to replace Prof Jiri Dvorak, the outgoing FIFA Chief Medical Officer and Chairman of FIFA’s Medical Assessment and Research Centre, for the abovementioned events.

Prof Kramer’s appointment marks the first time in over 20 years that someone new will be presiding over the medical operations of these iconic major football tournaments. ‘For this position to be held by a simple South African, out of the Free State, from Sports Medicine at Tukkies to the stadiums in Moscow and St Petersburg, is sure evidence that if one aims for the moon, perseverance, passion, performance and committed, caring colleagues can actually catapult one there’, he says.