Professor Mennen retired last year after having practised at Netcare Jakaranda Hospital in Pretoria for 25 years. “Professor Mennen is undoubtedly one of the finest and most pioneering hand surgeons in the world, and we at Netcare would like to congratulate him on being acknowledged with this well-deserved award and thank him for his outstanding contribution to the advancement of hand surgery,” comments Dr Erich Bock, director of Netcare’s North East region. 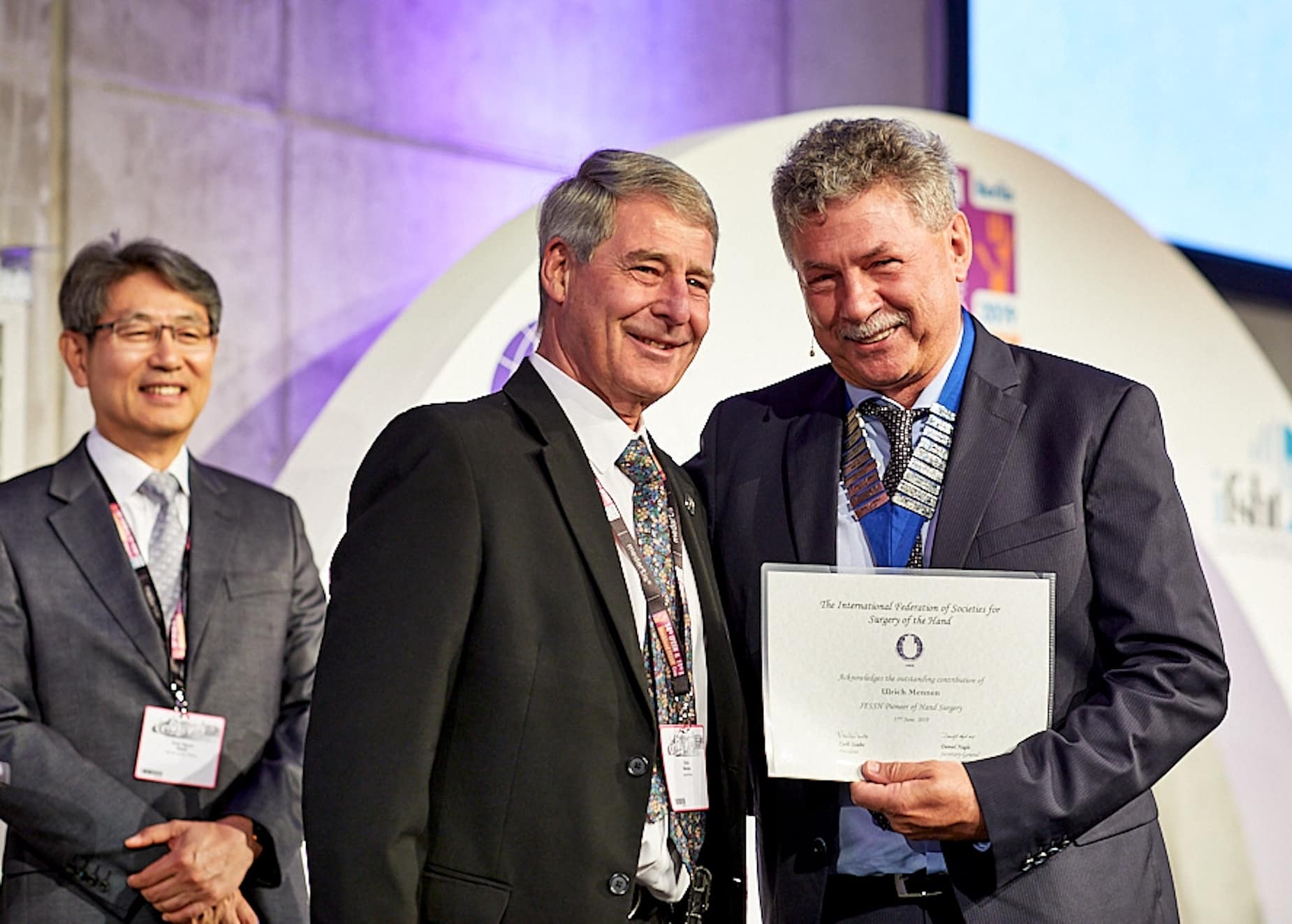 : The president of the International Federation of Societies for Surgery of the Hand (IFSSH), Professor Zsolt Szabo (right), presented Professor Ulrich Mennen (centre) with the prestigious Pioneer of Hand Surgery award at the IFSSH congress held in Berlin, Germany, recently. Looking on is Professor Goo Hyun Baek (left), secretary-general of the IFSSH.

“Professor Mennen not only made an outstanding contribution to Netcare Jakaranda Hospital where he assisted so many patients during the time he practised there, but also to the field of hand surgery internationally. It is therefore most appropriate for him to have been recognised by his profession and peers internationally with his accolade,” explained Dr Bock.

Some 4 000 hand surgeons and other healthcare professionals from around the globe attended the IFSSH Congress, which was held together with the 11th Triennial Congress of the International Federation of Societies for Hand Therapy (IFSHT) in June 2019.

“Professor Mennen served on the IFSSH Executive Committee for many years and was elected the 16th President of the IFSSH in 2010, the only hand surgeon from the African continent to have ever been bestowed this honour. He served in that role with great distinction until 2013,” added Dr Bock.

“It was a great privilege, and an experience of a lifetime, to receive the IFSSH Pioneer of Hand Surgery award,” said Professor Mennen, who recently celebrated his 72nd birthday.

“I have had the privilege of building on the sterling work done by predecessors who inspired me to follow in their footsteps. We are most fortunate to currently have outstanding hand surgeons and hand therapists in South Africa, as well as excellent hospital facilities,” he added.

“As all of us rely on our hands for activities of daily living and to earn a living, I am proud that my peers in South Africa are innovative and eager to further develop this important aspect of medicine.”

Professor Mennen graduated as a medical doctor from the University of Pretoria in 1970. He worked and studied in Germany, the United Kingdom and Canada for a number of years, qualifying abroad as a general surgeon in 1978. He completed his degree as an orthopaedic surgeon in 1980, and undertook a Fellowship in Hand and Micro-vascular Surgery at Duke University Medical Centre in the United States in 1983.

The Medical University of Southern Africa (MEDUNSA) near Pretoria requested that Professor Mennen establish and head the Department of Hand and Microsurgery in 1985. This active department has hosted numerous international hand surgeons, trained surgeons from all disciplines in the art of microsurgery, taught many registrars and local and international hand fellows, and has been involved in the teaching of thousands of local medical students.

Professor Mennen started a private hand surgery practice at Netcare Jakaranda Hospital in 1992, where he served until his retirement from clinical practice in 2018. Professor Mennen has over 230 publications, books and book chapters to his credit, has lectured in 39 countries, and visited numerous hand surgery units internationally, some as visiting professor.

The general manager of Netcare Jakaranda Hospital, Priscilla Botha, says that Professor Mennen left an indelible mark on the facility, where he established one of the country’s leading hand surgery departments.

“Professor Mennen is greatly missed by the management and staff at the hospital. We congratulate him on his well-deserved award and wish him all the very best going forward in his retirement,” she concludes.