The goal of achieving a seizure-free status in patients is accomplished in more than 60% of patients who require treatment with anticonvulsants.

Many patients experience adverse effects from these drugs, however, and some patients have seizures that are refractory to medical therapy.

Epilepsy is a chronic disorder, the hallmark of which is recurrent, unprovoked seizures. Many people with epilepsy have more than one type of seizure and may have other symptoms of neurological problems as well.

Sometimes EEG testing, clinical history, family history and outlook are similar among a group of people with epilepsy. In these situations, their condition can be defined as a specific epilepsy syndrome.

The human brain is the source of human epilepsy. Although the symptoms of a seizure may affect any part of the body, the electrical events that produce the symptoms occur in the brain. The location of that event, how it spreads and how much of the brain is affected, and how long it lasts all have profound effects. These factors determine the character of a seizure and its impact on the individual. Essentially, anything the brain can do, it can do in the form of a seizure.

Having seizures and epilepsy can affect one’s safety, relationships, work, driving and so much more. Public perception and treatment of people with epilepsy are often bigger problems than actual seizures.

A person is diagnosed with epilepsy if they have one or more seizures that were not caused by some known and reversible medical condition like alcohol withdrawal or extremely low blood sugar. The seizures in epilepsy may be related to a brain injury or a family tendency, but often the cause is completely unknown. The word epilepsy does not indicate anything about the cause of the person’s seizures or their severity.

According to the authors, “Monotherapy is desirable because it decreases the likelihood of adverse effects and avoids drug interactions. In addition, monotherapy may be less expensive than polytherapy, as many of the older anticonvulsant agents have hepatic enzyme–inducing properties that decrease the serum level of the concomitant drug, thereby increasing the required dose of the concomitant drug.”

People with seizures experience psychosocial adjustments after their diagnosis; therefore, social and/or vocational rehabilitation may be needed. Many physicians underestimate the consequences that an epilepsy diagnosis may have on patients.

“For example, patients with epilepsy may live in fear of experiencing the next seizure, and they may be unable to drive or work at heights,” states Ko.

Refer patients with intractable spells to a neurologist or an epileptologist for further workup, including video-electroencephalographic (EEG) monitoring, to characterise the etiology of their seizures. A neurosurgical consult is recommended when the possibility of surgical management is considered.

For patients who have had more than one unprovoked seizure, treatment with an anticonvulsant is recommended, states the study.

“However, the standard of care for a single unprovoked seizure is avoidance of typical precipitants (e.g., alcohol, sleep deprivation); anticonvulsants are not recommended unless the patient has risk factors for recurrence.”

“On brain magnetic resonance imaging (MRI), a focal abnormality in the cortical or limbic regions that indicates a possible substrate for an epileptogenic zone is the finding that most often suggests increased risk for seizure recurrence. Diffuse abnormalities, such as hydrocephalus, may increase the risk by injuring the cerebral cortex,” Ko said.

Abnormalities on an EEG may include any of the following:

Epileptiform abnormalities and focal slowing are the EEG findings associated with the highest risk of seizure recurrence. Nevertheless, even a normal EEG does not eliminate recurrence risk.

The risk of recurrence in a person with one generalised tonic-clonic seizure, a normal EEG, a normal brain MRI, and no evidence of focal onset is about 15%; in this case, the patient is not treated. If a patient has all risk factors, the risk is approximately 80%, and the patient is treated.

“The major unresolved question is how to treat patients with one abnormality, whose recurrence risk is 30-50%. One approach is to base the decision on a discussion with the patient that includes the risk of seizure recurrence, the risk of toxic effects from the anticonvulsant, and the benefits of avoiding another seizure.

“The clinician should also describe seizure precautions, including not driving for a specific time. Treatment with anticonvulsants does not alter the natural history of seizure recurrence; it only reduces the risk for the duration of treatment.

“The First Seizure Trial Group randomly selected 397 patients with an unprovoked, generalised tonic-clonic first seizure to either receive prophylaxis with a conventional anticonvulsant (i.e., carbamazepine, phenytoin, valproic acid) or to receive no treatment and reported that about 18% of treated patients had seizure recurrence within one year, compared with 39% of untreated patients,” Ko said.

Therefore, patients must be told that anticonvulsants can reduce their risk of having another seizure, but will not eliminate that risk.

The mainstay of seizure treatment is anticonvulsant medication. The drug of choice depends on an accurate diagnosis of the epileptic syndrome, as response to specific anticonvulsants varies among different syndromes. The difference in response probably reflects the different pathophysiologic mechanisms in the various types of seizure and the specific epileptic syndromes.

Some anticonvulsants (e.g., lamotrigine, topiramate, valproic acid) have multiple mechanisms of action, and some (e.g., phenytoin, carbamazepine, ethosuximide) have only one known mechanism of action. Anticonvulsants can be divided into large groups based on their mechanisms, as follows: 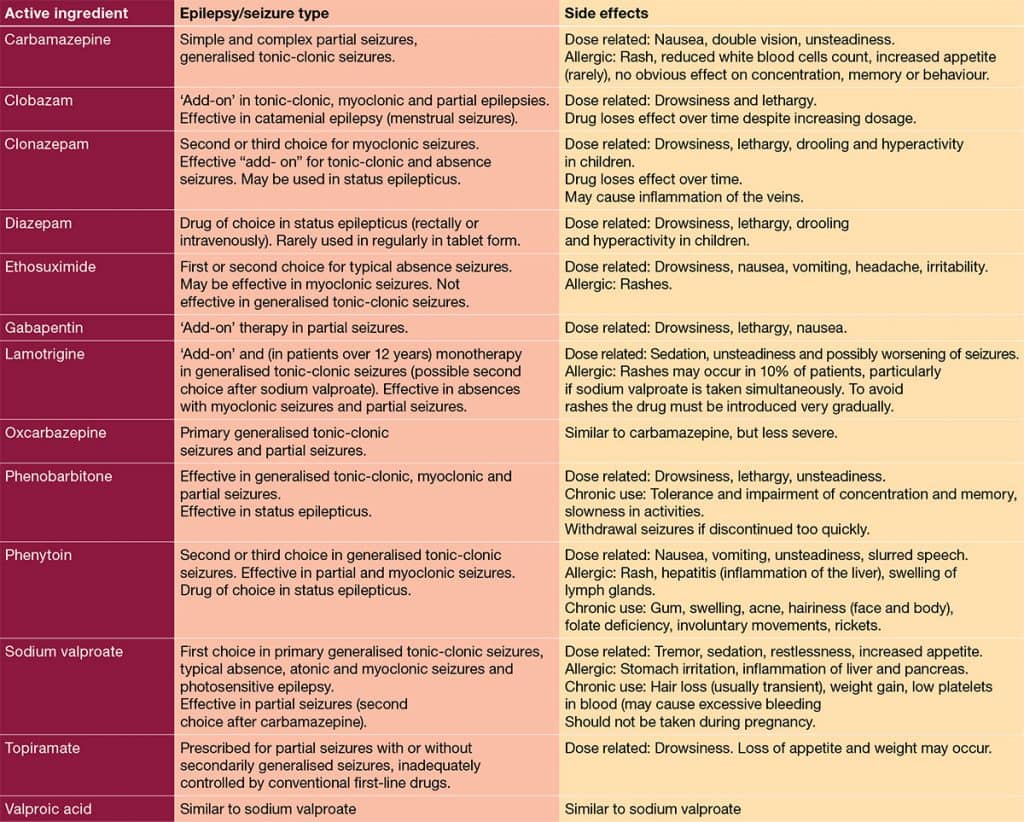