Iodine is a critically overlooked nutrient that could play a crucial preventative and treatment role in many diseases, especially of the breast. Unfortunately, iodine deficiency is a growing concern, even in developed countries. 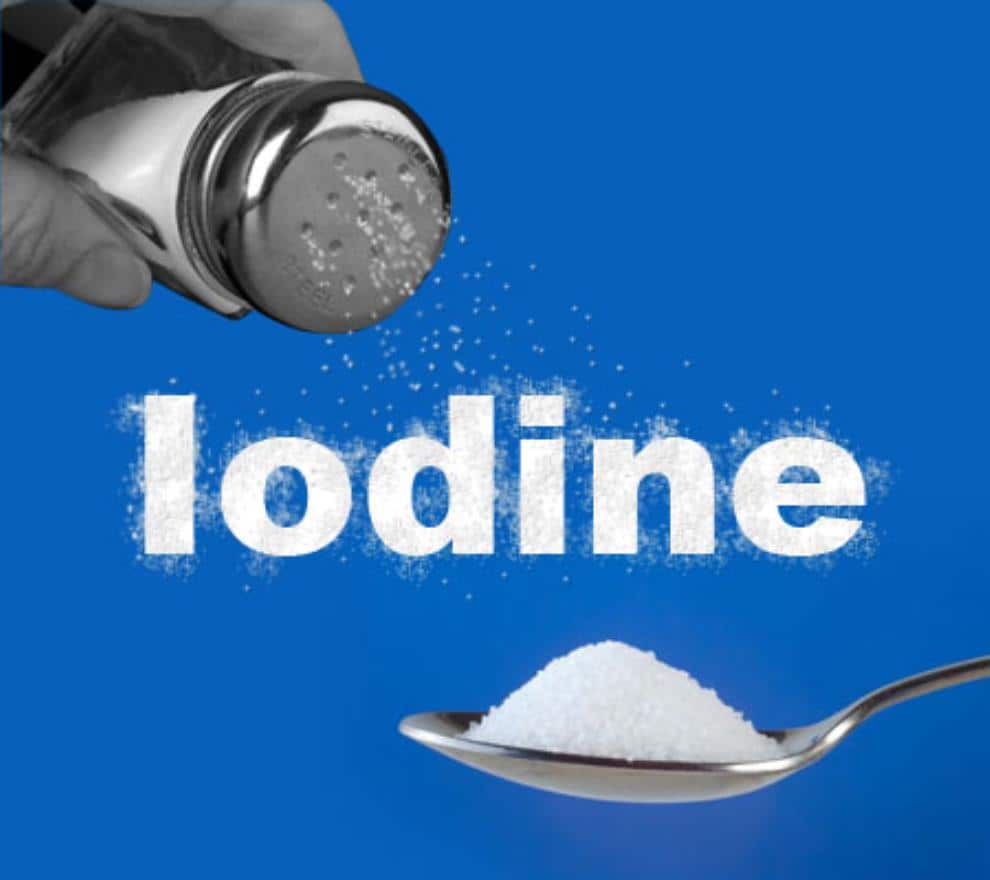 The optimal daily dose of iodine for a person is approximately 12.5 mg.

According to an update on the popular Breast Cancer Choices website, the therapeutic use of iodine for treating breast cancer is proving to be very effective. Furthermore it was reported that after 50 years of research and cross examination, abnormal iodine metabolism needs to be considered as a causative factor in many of our common ailments. An iodine deficiency has wormed its way into our modern constitutions due to a bromide overload, thanks to dietary and environmental sources.

A dietary deficiency of iodine they say, must be addressed as part of a “preventive and or a therapeutic strategy”. Iodine supplementation is not straightforward, as we know and some people are allergic to it. Often the iodine restoration sets off bromide-based reactivity that needs to be counteracted with literally – a pinch of salt in order to correct a patient’s iodine status.  But there is no excuse for not investigating the iodine status of patients who have thyroid problems, let alone breast cancer.

Iodine is a popular antiseptic, something our grandmothers kept in their medicine chests to use on cuts and grazes (ouch!) As a topical antiseptic, iodine is capable of killing pathogens that include gram-positive and gram-negative bacteria, mycobacteria, fungi, yeasts, viruses and protozoa. Most bacteria will die within 15 to 30 seconds of contact. But these days most people are wary of taking iodine supplements or using it topically as an all-powerful germ buster and endocrine facilitator.

In the early 19th century iodine saved the lives of people who would otherwise have died from common infectious diseases such as cholera or typhoid. These days we tend to overlook the vital role that iodine plays in just about every part of the human body – not just the thyroid gland. Iodine is an essential trace element and to the degree we lack iodine, we will continue to manifest iodine deficiencies regardless of surgery, hormone replacements and patent medications.

Breast cancer, microbial infections, hormone imbalances and thyroid problems are all related to iodine deficiencies in some way or another. An iodine deficiency is also considered to be the most common preventable cause of global mental retardation. According to the orthomolecular paradigm, the simplest way to address such a problem is to first correct the underlying deficiency – that of iodine because prescribing drugs for symptomatic relief of a condition does not address its initial cause.

The common blood test is not an accurate indicator of your iodine status.  Iodine that circulates in the bloodstream usually shows up as being adequate according to the standard test but it does not show how well iodine interacts at a cellular level or how well it engages on hormonal receptor sites. The iodine loading test is the best way to determine the extent of a patient’s iodine deficiency. 50mg of iodine is given in a single dose and a subsequent urine analysis measures the excreted amount.

The amount of iodine that is taken up and used from the 50mg dose reveals your level of iodine deficiency. Severe iodine deficiencies, ranging from 50% to as much as 80% showed up in all 60 of the breast cancer patients who were thus tested. More iodine is present in breast tissue than the thyroid gland, so one wonders why the iodine loading test is not included in a regular medical examination. Even in animal studies, scientists found that iodine deficiencies are not only responsible for problems with the thyroid gland but also adrenal glands, the thymus gland, the ovaries, the hypothalamus and the pituitary gland.

For the relief of fibrocystic breast disease it has been demonstrated that when iodine is sprayed on the mucous lining of a woman’s vagina it will be absorbed, taken up in the bloodstream and the patient’s breasts will soften within a few minutes.  Doctors also discovered that a small dose of iodine can relieve intestinal cramping and irritability.

When used as an antibiotic at doses of less than 50mg iodine destroys pathogenic bacteria yet it leaves the valuable probiotic gut flora intact – another built – in advantage of iodine therapy as opposed to regular antibiotics. Iodine is also valuable for breaking down biofilms that cause antibiotic resistance in the first place.

We need to appreciate the role that iodine plays in helping to prevent as well as treat cancer.

In the 1820’s the French physician Jean Lugol formulated a solution made out of:

According to iodine expert Dr Brownstein many patients who are routinely put on thyroid hormone for hypothyroid conditions could easily normalize their thyroid hormone output by supplementing with extra iodine and L-tyrosine instead of taking thyroid medications.  During the 1880’s to early 1900’s Lugol’s iodine was used to successfully treat Grave’s disease (hyperthyroidism) instead of radioactive iodine, surgery or drugs.

They achieved complete remission. Patients suffering from thyroid abnormalities such as hypothyroidism (under active), hyperthyroidism (overactive) and autoimmune inflammation of the thyroid (Hashimoto’s Disease) were all shown to be deficient of iodine when tested. During treatment, when all iodine levels were restored, their thyroids once again functioned normally and the swelling and inflammation subsided.

Iodine can be used to help treat most types of cancer as a systemic medicine and topically for skin and breast cancer. For the same reason that iodine is effective for skin cancers (often caused by microbes like mycotoxins) it would be effective in helping combat cancers caused by these pathogens.

“You cannot give breast cancer to rats that have sufficient iodine.” Is what Dr Brownstein concluded. Chemotherapy is a strange way to treat an iodine deficiency. Patients who lose their hair and possibly their breasts may still be suffering from a lack of plain old iodine. According to Dr. Blaylock: “A decrease in iodine intake coupled with an increased consumption of competing halogens, fluoride and bromide, has created an epidemic of iodine deficiency in America and this seems to be in part responsible for skyrocketing rates of breast cancer. It makes total sense that iodine, one of the nutrients that when deficient leads to breast cancer, would also help to cure it.”

According to Dr Abraham’s research: “the optimal daily dose of iodine for a person is approximately 12.5 mg.” This amount of iodine is very close to the 13.8 mg average intake of mainland Japanese. “12.5mg is equivalent to 2 drops of Lugol’s iodine, taken in a little water. The regular RDA of 200 micrograms is not sufficient, especially when the presence of bromide, fluoride and chlorine interfere with your iodine levels.

Side effects from a 2mg dose of iodine: Side effects are not common unless the patient is very deficient in iodine. These effects are usually temporary and patients recover after a few days.

Safety of iodine supplementation and topical use:

“Iodine is LIKELY SAFE for most people when taken by mouth at recommended amounts or when applied to the skin appropriately using approved products.”

Overdose: Patients, even if they are not allergic to iodine, who are given large doses of a few grams of iodine as a contrast medium for cat scanning may be affected by the following: a metallic taste, mouth sores, swollen salivary glands, diarrhoea, vomiting, headache, or a rash.

They may have difficulty in breathing. The thyroid may swell up to remove excess iodine from the blood and the throat may become sore. A fatal iodine dose begins at 2 to 3 grams. Give milk to treat emergency ingestion.

Iodine. Why You Need It, Why You Can’t Live Without It By: Dr. David Brownstein

This book will show you Dr. Brownstein’s latest research about iodine. Each chapter has been updated! Ensuring adequate iodine levels is essential to helping you achieve your optimal health. Dr. Brownstein will provide you with all new information on the importance of iodine.

https://www.webmd.com/vitamins/ai/ingredientmono-35/iodine    Iodine safety and side effects.