The doctor is faced with knowing information about a patient that may put others at risk of harm. The doctor must consider their competing obligations – a patient’s right to confidentiality balanced against their duty to act in the public interest. A recent such enquiry involved a patient who was previously a medical officer and recently moved to the area to begin as a registrar in anaesthetics. 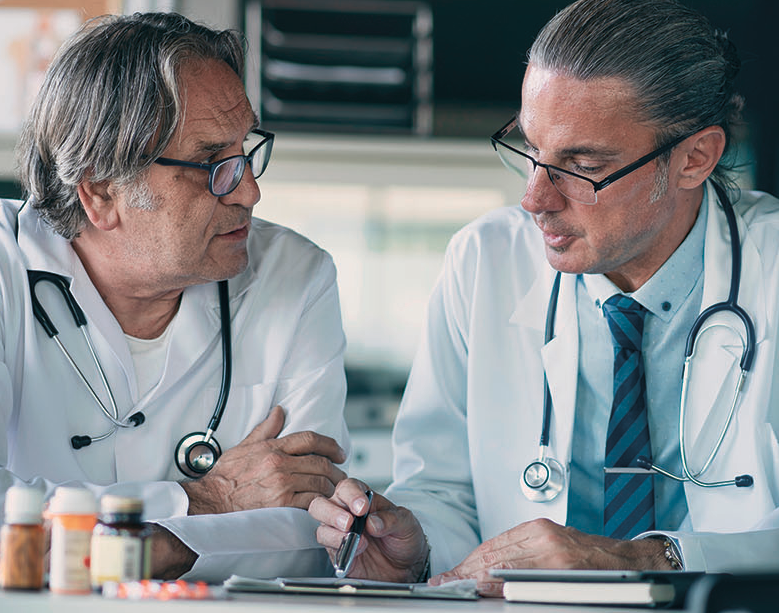 Ethical dilemmas may arise when doctors have to treat each other, especially if information disclosed under doctor-patient confidentiality could impact the wellbeing of other patients

The patient was brought to hospital by a friend after a fall and head injury. At the time she was clearly intoxicated and she disclosed to the casualty doctor that she had previously been addicted to opiate medication. She denied taking opiates on that occasion and said she had just had alcohol with some friends. The patient told the doctor that her addiction had been many years before and that she had recovered with support from her GP and counsellor.

Upon further questioning, the patient outlined that she had moved to the area to specialise and therefore could no longer see her counsellor. While attending to her head wound the patient continued talking, disclosing to the doctor that she was worried that the ease of access to opiate medication in her new job might lead to a relapse.

The patient explained that she had approached a local GP and asked to be referred to a counsellor. The doctor was concerned and spoke a colleague, who also spoke to the patient. It was suggested that they speak to her new employer about the issue but the patient refused consent for them to do this and left the department. Understandably the doctor was alarmed that she had not told her new employers.

The next day the doctor called Medical Protection for advice. He spoke to one of the medicolegal advisers, discussed the situation and considered the relevant sections of the Health Professionals Council of South Africa’s HPCSA guideline (Confidentiality: protecting and providing information [Booklet 10]) for good practice in the healthcare professions in particular disclosure to protect the patient or others:

9.3.1 Disclosure of personal information without consent may be justified where failure to do so may expose the patient or others to risk or death or serious harm. Where third parties are exposed to a risk so serious that it outweighs the patient’s right to confidentiality, healthcare practitioners should seek consent to disclosure where practicable. If it is not practicable, they should disclose information promptly to an appropriate person or authority. They should generally inform the patient before disclosing the information.

9.3.2 Such circumstances may arise, for example:

9.3.1.1 A colleague who is placing patients at risk as a result of illness or some other medical condition (eg an impaired colleague): If healthcare practitioners are in doubt about whether such disclosure is justified, they should consult an experienced colleague, or seek advice from a professional organisation. The safety of patients must come first at all times.

The HPCSA’s guidelines on ethical and professional rules (Booklet 2) states:

(c) Report any unprofessional, illegal or unethical conduct on the part of another student, intern or practitioner.

The doctor knew there was a potential risk to this patient (and to her patients) but noted the health issue appeared to be historic. He acknowledged that her previous employer/placement knew about the issues and they had allowed her to work with support. He also noted there was no immediate risk. The patient had explained she was not due to start her new job for two weeks.

The discussion also touched upon the doctor’s competing duties, particularly around the issue of patient confidentiality. In considering the guidance paragraphs above, the doctor was encouraged to reflect on whether he has justification to breach confidentiality and inform the relevant authorities and who this might be. As there was no immediate risk, it was agreed the doctor would speak to the patient again and failing that, would follow up with her GP.

The doctor spoke again to Medical Protection a few days later, he felt a lot happier after further discussion with the patient. He had been able to explore the situation with the patient the following day, once she had sobered up. He stated that he felt more confident as he had a better understanding of his professional obligations. It turned out this patient had informed the HPCSA of her becoming an anaesthetic registrar.

While her new employer did not know about this, the patient explained that they were to be informed prior to her starting the placement. The patient agreed to provide the member with an email confirming this and also for him to liaise with her GP for follow-up. This example serves as a reminder of the challenging situations that a doctor can face. Medical Protection offers support and advice with such ethical or medicolegal dilemmas to our members.