In 2012 alone, diabetes was the direct cause of some 1.5 million deaths, with more than 80% of those occurring in low- and middle-income countries. 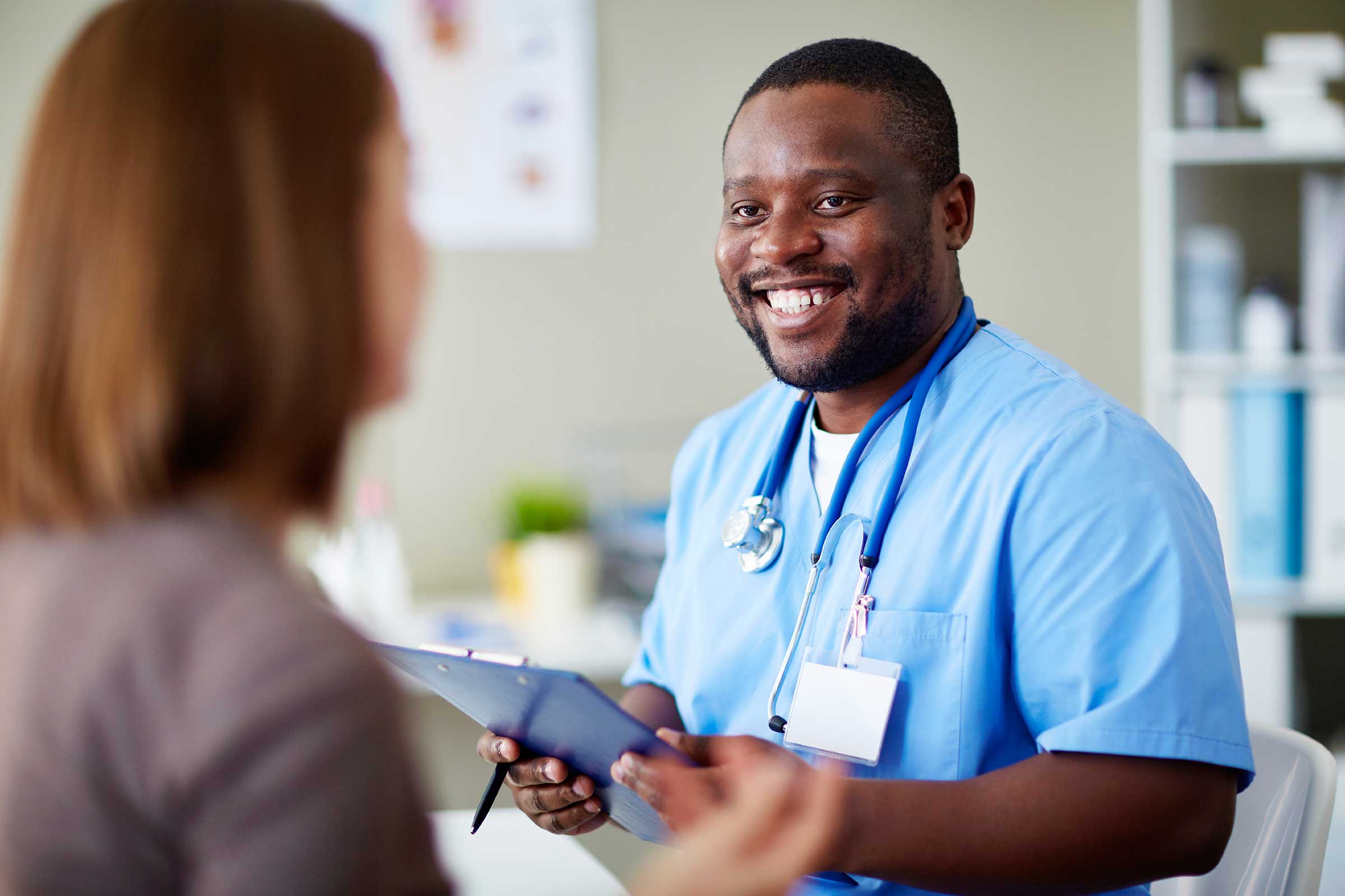 The rate at which diabetes is growing poses a big challenge to governments, health services, communities and individuals.

Some of the key challenges in the management of diabetes include:

The rate at which diabetes is growing poses a big challenge to governments, health services, communities and individuals. The disease not only leads to poor health, disability and premature death, but also has economic impacts – healthcare costs and loss of productivity.

The optimal management of diabetes play a key role in addressing some of these challenges. In their updated standards in medical care (2016), the American Diabetes Association (ADA) highlight individualised care to manage the disease, prevent or delay complications and ultimately to improve outcomes.

The guideline recommends the following in terms of the:

Correct diagnosis: The approach to the management of diabetes depends on whether a patient is diagnosed with T1DM or T2DM.

Diabetes and pregnancy: Women with risk factors should be tested for undiagnosed T2DM at the first prenatal visit. Using the ‘1-step’ Women without a history of diabetes should be screened at 24 to 28 weeks using the ‘1-step’ strategy with a 75g oral glucose tolerance test or the ‘2-step’ approach with a 50g (non-fasting) screen. If the woman tests positive, this should be followed by a 100g oral glucose tolerance test. In addition, women diagnosed with gestational diabetes, should be screened for persistent diabetes at six to 12 weeks after delivery and for diabetes or prediabetes at least every three years using non-pregnancy diagnostic criteria.

Maturity-onset diabetes of the young (MODY): This is caused by a defect in insulin secretion inherited in an autosomal dominant pattern. MODY should be considered in patients with mild stable fasting hyperglycaemia and a family history of diabetes that is atypical for either type. Children diagnosed with diabetes in the first six months of life should have genetic testing and should be referred to a specialist. Some medications including glucocorticoids, thiazide diuretics, and atypical antipsychotics, may increase the risk for diabetes.

Self-monitoring of blood glucose (SMBG) of HbA1c levels is recommended to assess glycaemic control. A useful adjunct to SMBG in selected patients on intensive insulin regimens is continuous monitoring of interstitial glucose.

Several studies have shown that SMBG is integral to effective therapy. SMBG allows patients to evaluate their individual response and assess whether glycaemic targets are reached. The frequency and timing of SMBG depend on specific treatments, needs and goals.

There is insufficient evidence of when SMBG should be prescribed and its frequency of in patients not on an intensive insulin regimen. However, noted the authors, SMBG on its own does not decrease blood glucose levels. The information is only useful if it is integrated into clinical and self-management plans.

Average glycaemia measured over several months are reflected by HbA1c levels and has strong predictive value for diabetes complications. The frequency of HbA1c testing depends on the clinical situation, the treatment regimen, and the clinician’s judgment. The ADA recommends that patients who meet treatment goals and who have stable glycaemic control, should be tested at least twice a year. The test should be done quarterly in patients whose therapy has changed or in those who do not meet glycaemic goals.

The efficacy of HbA1c testing is affected by conditions that affect erythrocyte turnover (haemolysis or blood loss). Haemoglobin variants must be considered (sickle cell anemia), particularly when the HbA1c result does not correlate with the patient’s blood glucose levels. The ADA cautions that HbA1c testing alone does not provide a measure of glycaemic variability or hypoglycaemia. The best way in which to evaluate glycaemic is to combine the results from SMBG and HbA1c testing.

According to the ADA, the HbA1c goal for most non-pregnant adults is less than 7%. Studies have shown that glycaemic control reduces microvascular complications of diabetes in patients with T1DM and T2DM as well as mortality in those with T1DM. A target of less than 7% is associated with long-term reduction in macrovascular disease if it is implemented soon after the diagnosis.

More stringent HbA1c goals (such as <6.5%) can be suggested for selected patients (such as those with short duration of diabetes, T2DM treated with lifestyle or metformin, long life expectancy, or no CVD). More stringent goals are associated with increased hypoglycaemia, and studies have shown no further improvement in CVD or mortality.

Less stringent goals (such as <8%) may be appropriate for patients with a history of severe hypoglycaemia (plasma glucose level <2.22mmol/L [<40mg/dL]), limited life expectancy, advanced microvascular or macrovascular complications, extensive comorbid conditions, or long-standing diabetes. According to the ADA it is difficult to attain the general goal in such patients despite diabetes self-management education, appropriate glucose monitoring, and effective doses of multiple glucose-lowering agents, including insulin.

Approach to the management of hyperglycaemia 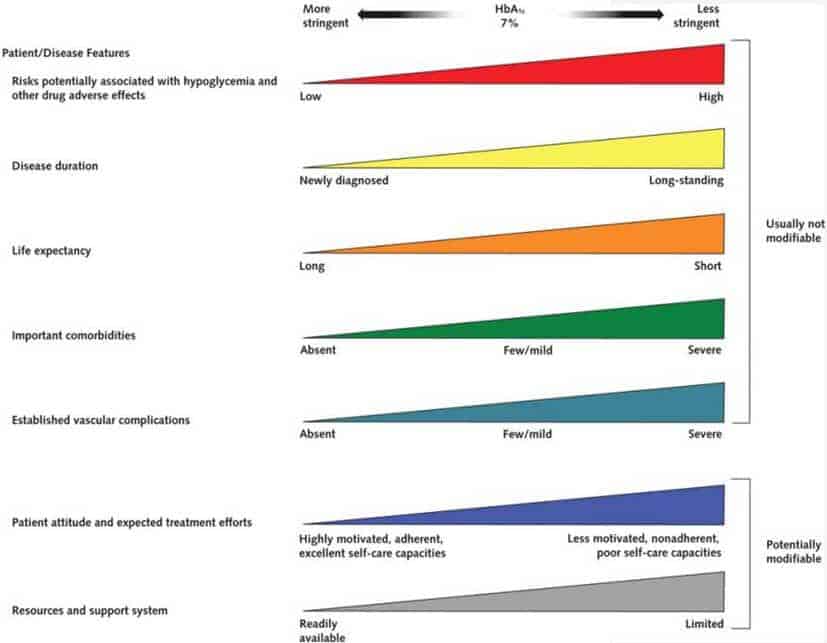 Hypoglycaemia (plasma glucose level <3.9mmol/L [<70mg/dL]) is the major limiting factor in the glycaemic management of patients with T1DM and those with T2DM treated with insulin. Severe hypoglycaemia, characterised by cognitive impairment, is defined as that in which the patient requires assistance from another person.

Glucagon should be prescribed for patients at risk for severe hypoglycaemia and their close contacts should be instructed on how to administer it. Administration of rapid-acting glucose (15g-20g) may reverse hypoglycaemia with administration of rapid-acting glucose. The preferred treatment is pure glucose. However, any form of carbohydrate that contains glucose will increase blood glucose level.

Acute glycaemic response can be delayed by added fat and protein. Blood glucose reversal should be confirmed with SMBG after 15 minutes. If hypoglycaemia persists, the process should be repeated, recommends the ADA. Patients should be educated about activities that increase the risk of hypoglycaemia, such as fasting for tests or procedures, during or after exercise and during sleep.

Behavioural modifications, dietary, lifestyle and pharmaceutical interventions are the foundations of optimal diabetes care. All patients should be encouraged to participate in diabetes self-management education and support. An individualised medical nutrition therapy programme, preferably provided by a registered dietician, is recommended for all diabetes patients. A physical activity plan for most adults with diabetes should include:

Multiple-dose insulin injections or continuous subcutaneous insulin injection are recommended for most patients with T1DM. Clear improvements in the risk for or progression of microvascular complications and cardiovascular disease with intensive insulin therapy (≥3 injections of insulin per day) or continuous subcutaneous insulin infusion compared with one or two injections per day have been shown by studies. The ADA strongly recommends educating patients on matching prandial insulin doses to carbohydrate intake, pre-prandial blood glucose levels, and anticipated activity level.

The choice of pharmacologic agents should be guided by a patient-centred approach. When considering different agents, considerations such as efficacy, cost, potential side effects, including effects on weight, comorbidities, risk for hypoglycaemia and patient preferences should be taken into account.

Lifestyle modifications, which include physical activity, are the starting point in the management of newly diagnosed patients who are overweight or obese. Patients should be encouraged to lose at least 5% of their body weight.

If lifestyle modifications are insufficient to maintain or achieve glycaemic goals, metformin therapy – the preferred initial agent (if tolerated or not contraindicated) – should be added at or soon after diagnosis. Metformin is inexpensive, has a long-established evidence base for efficacy and safety and may reduce risk for CV events and mortality. Data suggest that metformin can be continued in patients with declining renal function down to a glomerular filtration rate (GFR) of 30 mL/min to 45mL/min. However, the dose should be reduced, stress the authors of the guideline.

A second agent should be added if HbA1c levels are not achieved or maintained over a three month period using non-insulin monotherapy at the maximum tolerated dose. The following agents are recommended in combination with metformin:

The choice of drug should be based on:

Rapid-acting secretagogues (meglitinides) can be used in place of SUs in patients with erratic meal schedules or those who have late postprandial hypoglycaemia while receiving SU therapy.

Other drugs, such as α-glucosidase inhibitors, bromocriptine, colesevelam, and pramlintide, can be used in specific situations. Initial dual-regimen combination therapy should be used when the HbA1c level is 9% or greater to more quickly achieve glycaemic control.

Insulin should be used with any combination regimen in newly diagnosed patients when severe hyperglycaemia causes ketosis or unintentional weight loss. Insulin therapy should not be delayed in patients who do not achieve glycaemic goals. Timely dose titration is extremely important once insulin therapy is initiated. Adjustment of both basal and prandial insulins should be based on SMBG levels.

Basal insulin may be initiated at 10 units or 0.1 units/kg to 0.2 units/kg of body weight. Basal insulin is typically used with metformin and perhaps one additional noninsulin agent. When basal insulin has been titrated to appropriate fasting blood glucose levels, but the HbA1c level remains above target, combination injectable therapy should be considered to reduce postprandial glucose excursions.

A GLP-1 receptor agonist or prandial insulin, such as one to three injections of a rapid-acting insulin (lispro, aspart, or glulisine) administered immediately before meals, may be used. Twice-daily premixed insulin analogues (70/30 aspart mix or 75/25 or 50/50 lispro mix) may also be considered. Their pharmacodynamic profiles make them suboptimal for covering postprandial glucose excursions.

Insulin analogues are preferred because they are faster-acting. Inhaled insulin is available for prandial use but has a limited dosing range. It is contraindicated in patients with chronic lung disease. Lung function testing before and after initiation of therapy is required.

A common challenge facing clinicians is whether or not to continue oral and injectable agents when insulin therapy is initiated. SUs, DPP-4 inhibitors and GLP-1 receptor agonists are usually withdrawn when more complicated insulin regimens (beyond basal insulin) are used. However, according to the ADA, TZDs (usually pioglitazone) or SGLT2 inhibitors may be used to improve glucose control and reduce total daily insulin dose.

The ADA recommends that TZDs should be used with caution in patients with or at risk for congestive heart failure. In addition, the agent has been associated with fractures and weight gain.

The US Food and Drug Administration recently issued a warning about the risk for ketoacidosis with SGLT2 inhibitors. If patients have symptoms of ketoacidosis, they should stop taking the agent and seek medical attention immediately.