In the previous issue, Prof James Ker introduced us to haemodynamically stable venous thromboembolism. In this issue, he examines strategies to manage the condition. 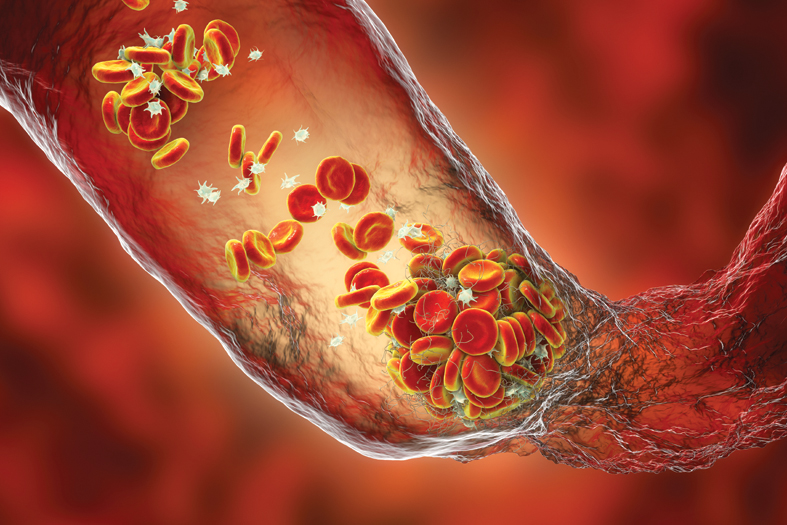 The diagnosis of VTE is dependent on three elements: clinical pre-test probability, D-dimer testing, and imaging.  Deep vein thrombosis and pulmonary embolism cannot be diagnosed by symptoms and signs only. Pre-test probability is calculated by one of various clinical prediction scores followed by D-dimer testing. The problem with D-dimer values is that the level rises with increasing age, and an age-adjusted value is suggested: age x 10ng/ml for patients older than 50 years. Compression venography of the proximal veins is a reliable test for the presence of proximal DVT.

Computed tomography pulmonary angiography to confirm the diagnosis of a pulmonary embolism has a good diagnostic accuracy and is relatively easy to perform and increasingly more widely available.

The concept is that the aim of treatment is prevention:

Rivaroxaban was tested as an initial treatment as a single oral drug compared to LMWH  in objectively confirmed acute deep venous thrombosis cases in a dose of 15mg twice daily for three weeks followed by 20mg once daily for three, six and 12 months compared to subcutaneous enoxaparin 1mg/kg twice daily followed by vitamin-K-dependent antagonist in the EINSTEIN trial. Rivaroxaban was non-inferior with 36 events (recurrent VTE events) vs 51 events in LMWH plus Vitamin-K dependent antagonists with a p-value of < 0.001 for non-inferiority. Major bleeding was seen in 8.1% in both groups. Similar results were seen in the EINSTEIN-PE trial in patients with proven pulmonary embolism.

Dabigatran was evaluated in patients with VTE after the first 5-10 days in patients treated with LMWH. In this second period of treatment Dabigatran was compared to warfarin (Vitamin-K-dependant antagonist) and found to be non-inferior with less bleeding than warfarin.

The second phase of treatment for three-six months

Patients with a VTE should be treated for a minimum of three-six months to reduce the risk of a recurrent episode of VTE.

DOACs are generally avoided in patients who are also taking P-glycoprotein inhibitors or Cytochrome P450 inhibitors or inducers such as azole antimycotics (eg, ketoconazole), several proteases that are used to treat HIV (eg ritonavir), and antiepileptics (phenytoin and carbamazepine) because these drugs alter the plasma levels of DOACs.

Cancer patients have an increased risk of both a recurrent VTE and an increased bleeding risk and these patients are treated slightly differently.

In VTE associated with cancer, LMWH is preferred above warfarin. In a meta-analysis, the use of DOACs in cancer patients with VTE, is associated with 32% lower risk of recurrent VTE, but with a 36% higher risk of bleeding as compared to LMWH.

In patients with an unprovoked VTE, consider testing for anti-cardiolipin and Beta2-glycoprotein-1 antibodies and initiate a DOAC as therapy. If there is high antibody titre or positivity for both, switch to LMWH followed by warfarin.

Less data is available for DOACs in the following circumstances:

The third phase is an extended duration of anticoagulation

After six months a decision must be made to discontinue or continue indefinitely after weighing up the consequences of long-term risk versus the risk of a major bleed due to the anticoagulant. Continuing anticoagulation beyond three-six months with a DOAC is associated with a reduction of 80% or more in recurrent VTE compared to placebo, with an increase of major bleeding of one-three times with a DOAC and four-five times with a vitamin-K dependent antagonist.

Consequently, DOACs are preferred over warfarin for indicated extended treatment of VTE.

Rivaroxaban became the first DOAC to be approved for use in extended treatment of VTE as discussed in an editorial in 2013.

Aspirin is not recommended for extended treatment of VTE given its lower efficacy and similar safety profile than DOACs.

Major bleeding events occur at 1-2% per year on an anticoagulant and such bleeding has a larger risk of death than a recurrent VTE episode. Therefore, evaluating a bleeding risk takes preference in the decision to continue an anticoagulant. The risk factors that may predict the long-term risk of bleeding is:

The presence of two or more of these risk factors is associated with an increased risk of bleeding of more than 2-3% every year. VTE associated provoked by a major transient factor, or an unprovoked isolated distal deep venous thrombosis have a low risk of recurrence and anticoagulation can be stopped after three months.

Patients with antiphospholipid syndrome, active cancer or a second episode of unprovoked VTE it is recommended to continue anticoagulation indefinitely.

Catheter-directed thrombolysis as the initial treatment of an acute DVT is not recommended unless the patients have a threatened limb due to the thrombus. Systemic thrombolysis as initial therapy for VTE is not recommended for patients that are haemodynamically stable even if there is right ventricular dysfunction and elevated cardiac biomarkers because the benefit in these circumstances is opposed by a high risk of intracranial bleeding and non-intracranial major bleeding. Systemic thrombolysis is recommended for high-risk PE with a rating of Class 1 (Indicated) with an evidence level of C. (consensus opinion or data only from an observational study or a registry).

Systemic thrombolysis (rescue thrombolysis) is also indicated in those patients who deteriorate haemodynamically while on full anticoagulation: Class 1 level B (single large RCT).

This should only be used in patients in whom anticoagulation is contra-indicated.

Thromboprophylaxis in patients at risk for VTE is imperative in reducing the global burden and is warranted in those patients where the risk of major thromboembolism is higher than the risk of bleeding. Such patients are seen in major orthopaedic surgery and cancer surgery.

Some important concepts from the European Guidelines

The search for safer anticoagulant continues.