Tachycardias are cardiac arrhythmias characterised by a rapid heartbeat that may be regular or irregular, but out of proportion to age and level of exertion or activity. In general, a resting heart rate over 100 beats per minute is accepted as tachycardia in adults.1 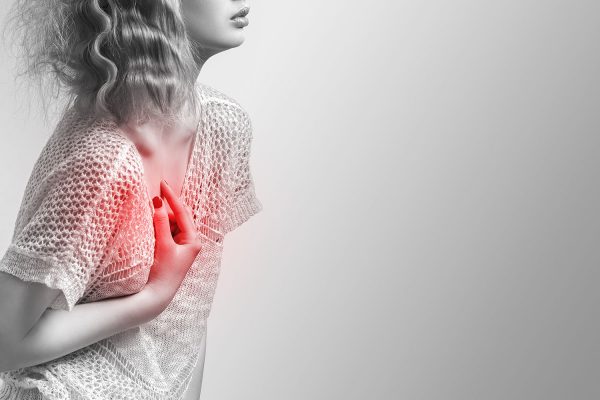 A resting heart rate over 100 beats per minute is accepted as tachycardia in adults.

Tachycardias can be categorised by the location from which it originates in the heart. Two types of tachycardia are commonly encountered in clinical practice are:1,2,3

Symptoms and findings indicative of VF

Acute presentation, symptoms, and electrocardiogram (ECG) findings that are indicative of VF include:5

The most common presentation for VF is sudden collapse from cardiac arrest leading to sudden cardiac death (SCD), the leading cause of mortality worldwide.5,7

The ECG may reveal:5

Surviving VF and beyond

A thorough history – ask about unexplained cardiac death in a family member and patient’s cardiac history – and physical examination is essential in patients who survive VF.5

Clinicians should also investigate and address reversible causes of VF such as electrolyte abnormalities, acidosis, and hypoxia, as well as evaluating patients for underlying ischaemic heart disease. More than 50% of patients who suffered out of hospital cardiac arrests have significant coronary artery disease.5

An echocardiogram is usually done to assess the wall motion, ejection fraction and any valvular problems. In addition, it will identify any pericardial fluid that may have resulted from cardiopulmonary resuscitation.5

Electrophysiology studies should be done after the patient is stable to differentiate patients with inducible VF from those with non-inducible VF. Patients with induced monomorphic arrhythmias may need an implantable cardioverter-defibrillator (ICD).5

A VT electrical storm (ES) is characterised by clustering episodes of ventricular arrhythmia (VA) in a short time frame. The current definition of ES implies at least three distinct episodes of sustained VT or VF within the last 24-hours or the occurrence of incessant VT for at least 12-hours.7

In patients with ICDs, ES is defined by ≥3 appropriate device interventions in the last 24-hours (separated by at least 5-min one from the other) either with anti-tachycardia pacing or direct-current shock.7

Amiodarone is one of the most commonly used antiarrhythmic drug (AAD). It was developed originally as an antianginal agent in Belgium in 1962. Subsequent studies showed that it had antiarrhythmic properties.8,15

The oral preparation (200mg/tablet) was approved by the American Food and Drug Administration (FDA) in 1985 for the treatment of life-threatening, recurrent VT/VF associated with haemodynamic instability.8,15

Intravenous (IV) amiodarone was approved by the FDA in 1995. IV amiodarone can be used to treat SVTs, most commonly atrial fibrillation, in acute settings (eg perioperative cardiovascular surgery), in intensive care units, and in emergency departments.8,15

Efficacy and safety of amiodarone

Current guidelines recommend amiodarone as first-line therapy in some patient groups with SVT and VT/VF. Amiodarone has demonstrated its efficacy to control VAs in up to 40% of patients within 24-hours from IV administration, as well as to reduce recurrent VT over the long term.8,10,11,12,13,15

Santangel et al (2012) investigated the safety of amiodarone compared to placebo. According to the authors, amiodarone is both safe and effective for the acute conversion of AF and the prevention of postoperative AF, although with an increased risk of bradycardia, hypotension, nausea, or phlebitis.16

Treatment with amiodarone for the prophylaxis of SCD has less favourable net clinical benefit (NNT = 38 versus NNH for either thyroid toxicity, hepatic toxicity, pulmonary toxicity, or bradycardia = 14). Amiodarone treatment in this setting should be used in only selected cases.16

Although its efficacy is not questioned, it has been associated with side effects involving organs such as the thyroid, liver, lungs, and eyes including many that are dose- and duration-dependent. Vigilant surveillance is required.16

According to Epstein et al, meticulous follow-up is central to the care of patients taking amiodarone.  Patients treated with amiodarone should be evaluated every three to six months for the first year, and every six months thereafter to assess amiodarone-related symptoms (see red flags), and to investigate possible arrhythmia recurrences, need for drug titration and laboratory testing and changes in drug therapy.8

Follow-up evaluation should include at a minimum:

Surveillance amiodarone levels are generally of little use but can help if arrhythmias occur or recur, or if new symptoms develop, especially after dose titration or a change in drug formulation (to or from generic preparations). Amiodarone levels may help determine if the drug can be titrated downward or when another antiarrhythmic drug can be substituted. 8

In patients with ICDs, amiodarone may slow the VT rate so it falls below the rate detection. It may increase the energy required to defibrillate. Thus, the drug should not be started or dose changed without the involvement of an electrophysiologist or cardiologist.8

According to the authors, most of the reported side effects are incidentally revealed through routine laboratory screenings. Some life-threatening side effects have been reported in patients only on short-term amiodarone, although these extreme adverse events are very rare.17

Furthermore, many well-designed studies show that amiodarone is safe under vigilant surveillance. Systematic screening and regular follow-up are the essential elements.17

The available data to clarify the side effects and propose preventive strategies remain under discussion. Moreover, most side effects are diagnosed only after the exclusion of other causes, which could lead to an altered estimation of their incidence rates, they concluded.17

Neurologic and visual changes: For example ‘halos’ around lights, are usually dose-related, and often occur in the first phases of loading. Thus, the lowest effective dose should be used. Early assessment and intervention are necessary to prevent serious organ toxicity. Continued assessment of drug efficacy, titration of drug dose after achieving a steady-state, evaluation and management of adverse effects, and attention to drug-drug and drug-device interactions are crucial. Referral to a neurologist or ophthalmologist might be required.8

Thyroid function:  Amiodarone use can lead to hypo- or hyperthyroidism. Acutely, there is an increase in thyroid-stimulating hormone, an increase in free T4, and a decrease in free T3. After three months, a new equilibrium is reached, and TSH normalises, again becoming the most reliable marker of thyroid status.8

Gastrointestinal/liver toxicity: Nausea, anorexia, and constipation are among the most common gastrointestinal effects of amiodarone, are dose-related, and rarely require specific treatment or intervention.8

Neurological toxicity: For example cognitive impairment and at high doses, quadriplegia has been seen. More commonly, weakness and tremor occur. Peripheral neuropathy is possible. Myopathy, polyneuropathy, and ataxia may not necessarily be reversible with amiodarone discontinuation. There is no specific treatment for neurological toxicity except to discontinue or decrease the amiodarone dose and wait for its elimination or decreased effects.8